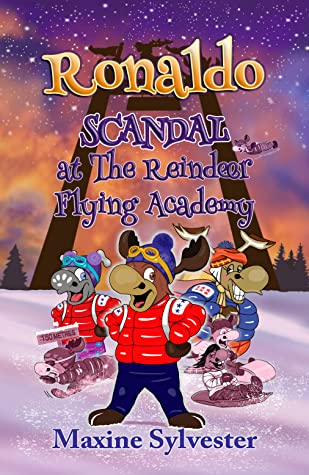 A shiny new Ronaldo book! And I could read it! I just adored the previous two books in the series that I read. I was curious what kind of scandal would happen in this book and of course what kind of adventures (or trouble) Ronaldo would get into. XD

The book starts off with Ronaldo trying to impress a new girl at his school, she is called Dizzy and he is all head over heels for her. I felt both sorry for him and had such a laugh because each time he tried to impress her something went wrong. Either the cologne made his friend sneeze all his chocolate shake over Ronaldo or a tiny girl he kept meeting kept creating chaos. I just wanted to tell him to just act normal and that that would be enough, but I could also definitely understand his need to be fabulous, extra fabulous.

I loved seeing all that happened in the town and read about the various stores and cafes, but I had even more fun when it was time for the Academy! Flying lessons, running lessons, talk about Santa Claus and his reindeer. At times I really wanted to pop into the book and just have fun as well! I want to fly!

I just loved that we slowly build up to the scandal, that we saw that things weren’t 100% OK at the academy. A sleepy commander. A commander who just isn’t doing her job well. A new girl in class with a very strange and angry dad. The build-up was great! And then when when things really went wrong, I just loved that Ronaldo stepped up. That he didn’t let this one go. I loved that he didn’t just investigate on his own, like so many other kids in children’s books do, but also got the adults involved. He knew he could trust them and they showed that they believed him. Of course he also went his own way to make sure to get something very important which made me happy. He knew the adults would probably have no way to get evidence. I was rooting for Ronaldo and also so so proud of him.

I do have one question, that man that the grandfather knew… it is probably not x father then, but their grandfather?? Or did that man also find out a magical potion?

The ending was both sad (because of a certain character), but also very happy. I just adored that Ronaldo got that set up and that he got all the help from everyone to make it happen. The town really loves that character. I loved what Ronaldo and his friends did that was just so sweet. Haha, yeah, I am keeping it vague because I don’t want to give away too much, but I do want to talk about it because of how it made me feel.

The art was once again very fun, I just adore the style and it fits so well with the story~

All in all, this is another fun Ronaldo book and I had fun reading it. I just flew through it and cannot wait for the next book. Guess until then I will be reading books 1 and 4 as I haven’t had time to read those. I would recommend this series to all in for a bit of magic, love Christmas, and love reindeers.