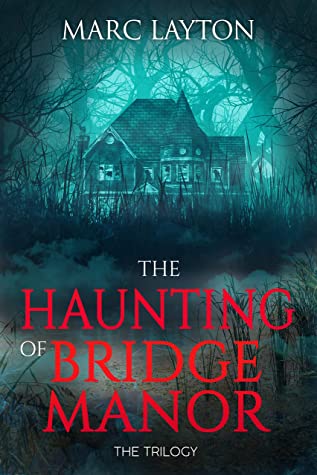 A spooky tale in three parts. A lady in a lake. Green eyes flash. But it could have used a little dash of editing.

This is a book featuring three novellas in one. In the first one we get to meet Rachel and her family as they go for a vacation. We learn a bit about the house and things get creepy quite soon. Not just by things that are happening but with the tales that we learn about the house that Rachel now lives in for the summer. Things are disappearing, there is a lady walking around, a door to the basement opens at will (which is a big fucking red flag for me), and more. It was a good first novella, very exciting and things really got more and more scary with each page and closes off with a bang and a NOPE at the end. In the next part it is a few months later and we get the aftermath of what happened in the first part. We see Ben and Rachel live with their aunt, but things are still off. While not taking place at the manor, boy this was still very creepy! Ben sees things. Rachel experiences things. I just wanted to hug the aunt because she doesn’t have it easy. I have to say that in this part I was not a fan of Rachel. She was already a hard character to like in the first one (but I can forgive her as she was a 100% teen XD) but in this one she takes it up a nudge. And in the final novella we get some more deets on the house and the history and some scary things. But sadly also an anticlimactic ending. 🙁 I really loved how things clicked together.

I loved that at one point we get the history of the house, we are going back to the 1800s and see the guy who build the house on the land that was not meant to be build on. We read about all that happened before the gruesome events.

I also liked that we get to see POVs from other characters. While a tad confusing given that we are almost always with Rachel, I was still happy for a change of scenery.

But some editing would work. Some of the scenes just didn’t feel like they matched together, sometimes I had to re-read because we went from a to c. I also have questions, did Rachel get hurt on a playground or while bicycling? We get both options. Also Rachel says she got a concussion like it is nothing, but really girl, for a concussion you aren’t going into a coma for 2.5 years because otherwise your brain will do bad things. Also 1869 is not and definitely not EARLY 1900s.

The ending was also quite a disappointment. I mean, it was quite exciting with Rachel going all cray-cray, but the solution to it all? So simple. So dumb. I am sorry to say that, but it just felt so dumb. It also just came out of nowhere and I feel if it was maybe a tad longer it would have worked better. As of now it was someone found out about x then within 5 pages things were solved. Boom. Done. Cue to 5 months later…

Despite some issues I had with the book I still had tons of fun reading it! It was a good read with plenty of scary parts! I am happy I found out about this book!