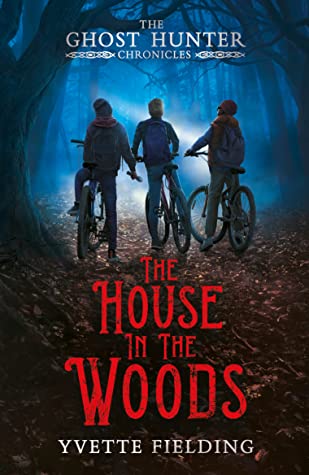 Not what I expected + had hoped for more scariness!

I had HIGH hopes for this one, I am all about ghost hunting and seek out books about it, but also, if available series and movies. So I was very excited about this one. Sadly, while there were good moments it just wasn’t all up to my expectations and there were things that just threw out the momentum. I will be doing a good/not so good review.

😍 Loved the first part of the book in which our crew decides it is a cool idea to do an Ouija board reading in a spooky old abandoned house.
😍 Did I mention that they are doing it on Halloween! Yep, the creepiest night and they just hop inside a scary old house. OOOHHHH!
😍 The parts that followed and then the next night were absolutely amazing and OH BOY, I was on the edge of my seat reading~ The ghost does something scary at each of the 3 houses, from endless ringing and bloody prints to spooky noises in the attic.
😍 Loved that Uncle Rufus participated in the whole thing. He was a kooky/weird person, but I am happy that he wasn’t just going to let the kids do this alone.
😍 I am happy that we get to see each of the 3 younger character’s POV. OK, Clovis was a bit hit/miss, but I really liked Eve and Tom! They were such fun characters.

😐 So many explanations. Everything gets over-explained. I mean, seriously, we can imagine/guess what that soldier with the mask is. Or what coordinates are. Or whatever else there is. Clovis (and also Rufus) kept explaining everything. It really pulled me out of the story and that is not what you want to do when things get scary. Quite often I wasn’t even scared because everything was explained. Boo.
😐 Nazi ghosts. I am sorry, I just cannot take it seriously. It reminded me of another book I read (not about ghosts but about murder) and how that suddenly went to nazis as well.
😐 Plus the comments on the Germans. Like it was a magical event for them to be in the UK. Um, hello? Airplanes? Smuggling? Boats? It is not as if, just because you are on an island, people cannot find a way in. XD
😐 I get that Hitler is evil. I really do.
😐 Clovis was just such a know-it-all. And people who read my reviews know how I quite often feel about those types. It can be written well, with someone who has knowledge but isn’t constantly acting like a wikipedia. Sadly, Clovis constantly was explaining, constantly had his opinion, his thing ready. And it got annoying.
😐 I am still not sure how much I like the ending. On the one hand, good. On the other hand… mmmmmm.
😐 Rufus and how old-fashioned he talked. Sometimes the overall language also had that touch, which had me confused when the kids picked up a laptop. XD But Rufus was especially bad. It just felt comical.
😐 How there was just an entire middle that was absolutely boring. We get a terrific beginning and an OK scary ending, but in between nothing was happening and there were moments I was considering DNF-ing the book.
😐 The inventions. While I love that they were all about ghosts, it made me worried about Rufus. Maybe find some help? Also how big is that attic that one of the MCs could just keep on bicycling and it took quite a bit of time before he hit the ceiling. XD

So yeah, sadly, 2.5 stars is all I can give, and that means it is going on the pile to be sold, or well tried to be sold. I am so sad that the book wasn’t as fun as I had hoped, wasn’t as scary as I had hoped. I just wanted a spooky scary story with plenty of hauntings and scary bits. And again, as I said for another MG horror that didn’t work out, just because it is MG doesn’t mean it can’t be scary. Goosebumps, You’re Invited to a Creepover, What Lives in the Woods, Small Spaces, and many others have proven that MG can be scary.

One thought on “Review for The House in the Woods”