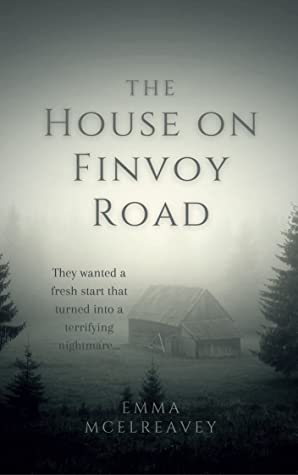 Exciting, scary, sometimes a bit dramatic, but in overall SPOOKY! My first horror of the year and YAS!

I came across this one on Twitter and I just knew I had to try this book out! I was already looking for some horror to read and this one seemed perfect. Old house in the middle of nowhere with a scary big field and no lights outside. Oh yes!

I loved the prologue that immediately set the tone for the whole book, especially when we see Eamon is the MC and he is going to be living in that house along with his brother and mom. I was supercurious about the house and what lurks in and around it.

The horror parts were just SO scary. I mean there is a girl walking (well stumbling) around. There are strange noises and things get thrown of places. There is a pressing feeling and if you are “lucky” you may just meet the tall man. Whose intentions aren’t nice or kind. There was so much happening in this book and I was just on the edge of my seat (or cuddling deep into my bed, haha). There were moments that I almost screamed in terror because it got so scary. And if you think it happens only inside the house, well WRONG. Something is also outside. The tall man doesn’t want you near the house, in the house, or anywhere.

Eamon was the best character in my eyes, followed by his little brother Joshie. They were both well-written and I was just rooting for these brothers.

But, Sammie was my least favourite. Why? I am just not into characters who cheat on their husband. If you have relationship problems, talk. Go to a therapist. Don’t go to a bar, find a new dude, and then divorce a few weeks later. And later on when something happened to Joshie and she immediately assumed Eamon did it. WTF. I think it will be a long time before Eamon can trust his mother again. A long long time. I don’t blame him. I would have done the same.

I loved finding out more about what happened on the property and why it is so haunted. Who the dark tall man is. Who the small girl is who keeps hiding in the cupboards. It took a bit before we find out but I was totally happy when we found out more. The story is gruesome and I was so sad for 2 characters, to have gone through all that. To still go through it. Waiting until someone helps them. Saves them.

But there were some issues I had with the book. A big glaring one happened at 83% of my Kindle. One minute we see Eamon and his mom in the kitchen because something is lurking there, and then BANG we are in the (school)library with Eamon and his friend. It was very confusing and I found myself going back and forth multiple times to see what happened.

Then there are some spelling errors and sentences that didn’t go well (some just had an extra word, some just seemed to be two sentences in one). And also the POV could have been much better in my eyes. Now we get quite a few POVs, the main ones being Eamon, Sammie, and Joshie. But we also get Mr. Morrow, Shaw, and some others. If it was done well I wouldn’t have a problem with it, but as it was now it would sometimes just flip to another character in a paragraph and then back again. I had to re-read quite a bit to make sense of it all as at times I just didn’t notice the change that easily.

All in all, this was a book I flew through and I hope that this author writes more books! Because I need them!