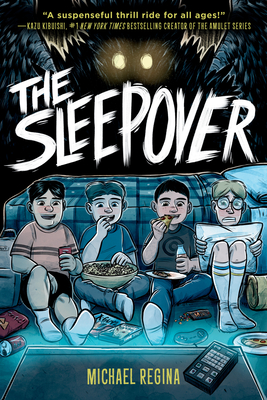 Spooky and scary, but also sad because it also deals with loss and mourning a loved one.

In this one we meet Matt. A boy who lives with his mom, his sister, and yes, his nanny in a nice home near a lake. With an ominous forest next to it. As soon as the forest was mentioned and that kids kept disappearing if they just dared to go into it, I was fully in it! I needed to know what lives there. Who it was. What happened to them. Also what is up with the ravens? When Matt’s nanny dies they need a new one and in pops the scary new nanny. I was just like Matt. Noping the way out of everything. This woman just had an aura of RUN AWAY or she will EAT you. Had a laugh that the mom was clearly not awake enough to notice. I mean, it was just so obvious. At first it seems that she was just being mysterious and scary, but BOY when she showed her true side I was terrified. Also those teeth! What follows next is scary! I was definitely on the edge of my seat and needed to know if all the kids would be safe! If everything would go well! I loved the kids and their plans and I was rooting for them. I don’t want to tell too much!

I also love that we find out more about the witch and what happened to her. It doesn’t excuse what she did, but I did feel sorry for her. At least, who she used to be.

Then there is also a big part of the book being about grief. Mourning. Because quite early on in the book Matt and Judy’s nanny, who they love very much, died. And they are trying to find a way through the sadness. They are angry, sad, feeling alone. It was well-written and while at times I thought it wasn’t too fitting, for most I did like it.

And I am sorry, but I just wasn’t a fan of Judy. I get that she is very young, but she was just so persistent and it annoyed me how she was so clingy with her brother. He just wanted to have some fun with friends. To watch horror movies. While he could have been a bit nicer at times when she was clingy again, I can also imagine why he was that way. I mean, if she does this every time, every day, I can imagine that one day it is just TOO much.

I also found it so American. XD With how the mom had to work super late and still wasn’t paid enough it seems. How after the loss of someone she just had to work very soon after or lose her job. WTF is wrong with you America? Also having a nanny who just lives with you? Or is always there? I mean, we have baby-sitters here for evenings or short hours, but I don’t know anyone who has or had a nanny almost all day at their homes.

The ending made me smile!

I really liked the art in the book, loved the character designs, loved the spookiness.

All in all, recommended!