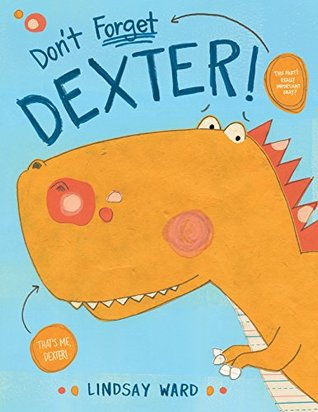 A fun story about a small dinosaur toy who loses his owner! Dexter was forgotten!

I just cannot resist books about dinosaurs… well, OK, the non-fiction stuff I am bit hesitant about these days, but I do love a good picture or children’s book about a dinosaur! And this one sounded adorable and I loved the promised interaction with the reader.

Meet Dexter. Or as his full name is, Dexter T. Rexter (yes, epic name). He has lost his owner, Jack. And he is asking us the reader if we can help him! Telling what has happening, or well, what he remembers as things happened very suddenly and even drawing us a picture (which was just hilarious to see as he doesn’t have the skills, at all XD). As an older reader I knew what had happened, or well I had an idea already, but I was looking forward to Dexter realising it himself, or someone realising it for him.

It gave me serious Toy Story vibes. This is a dinosaur toy who can think/worry/apparently move and talk as well. He loves his owner dearly and there is even question if his owner has left him, but just like Buzz would say, he is too epic to be abandoned. Insert all these cool features, who wouldn’t want that as a toy (and he is right, I want a Dexter toy now).

As the story continues we see Dexter try all sorts of things and my heart just broke for the little fella. Again, like I said before I knew what had happened, and I just wanted to step in, hold him until his owner would come back!

The ending just made me smile! That was so cute! Expected, but still a very good one~

The art was tons of fun and I love the bright orange colours everywhere to match with Dexter.

All in all, looking for a cute book about a toy looking for his owner/playmate? Be sure to check this one out. Adults and kids will love it~