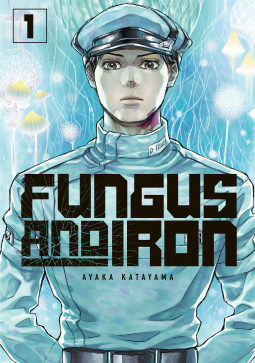 For the first part I was a tad confused on what was going on, but as the story went on we learn that this is a post-apocalyptic world ruled by mushrooms, yes really. Apparently they took over humanity years ago and everyone is under the influence in various degrees. We have two factions, the faction our MC belongs to which is very violent and very much into war, whereas we have another faction called Ether who is trying to save the world/survive, and yes, they know how weapons work, but they aren’t as organised as our MC’s faction. You really don’t want to belong to the MC’s faction though, holy crap. People get killed for being weak, having disorders, someone was even beaten and shot for having an ear infection… Yup.

The whole eating iron and getting stronger was just so weird, I finally do get the whole Iron and Fungus though now. The fungus I was already clear on because hello world taking over by fungus, but the iron was a bit of whut? But now that makes sense, well, not sense, but you know what I mean. XD It was quite funny to see Dante eat metal though I wonder how his body was so easily accepting that, I mean, he has eaten human foods until now.

I loved the meeting between Dante and Aoi, it was so adorable! I do hope that these two meet up again, because seriously, I need some more light-hearted moments.

There are some fun twists and unexpectedness like the one on page 73 (for me at least it was that page).

I just hadn’t expected it to be so gore-filled. Haha, my stomach at times wasn’t too amused with things. We see people get crushed in full detail by rocks, see our MC get cut open, see heads and blood fly around, there is enough torture. It did fit with the story and what it was about, but really, haha, I hadn’t expected it. XD So be warned!

All in all, I am still a tad confused on what the hell is going on in the manga. We get some weird characters and weird stuff is happening that confuses me greatly. But I am also interested in this manga, great fight-scenes, pretty good post-apocalyptic story though I also hope that one day we get some more information on how the world was taking over and what happened those days. I really liked the art, very shounen, but also very good! I will give this series another volume at least!

2 thoughts on “Review for Fungus and Iron, Vol.1”