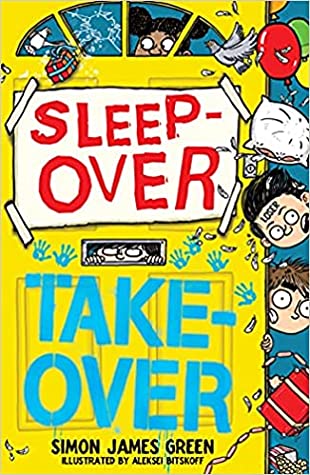 A laugh-out-loud book about a sleepover going completely wrong and the day after!

I thought I would just list all the things I loved about this book, and it is a lot so here we go~

😍 I just ADORED the sleepover and throughout that part I just wished I could step into the story and eat at the food trucks, jump in the ball pit, have a great time at the chocolate fountain (but not too much of a great time… looks at Otis), dance and jiggle. It was just a dream sleepover.
😍 Otis was such a fun character. He knows he is dorky and at times he isn’t too happy, but I loved that he stayed for Rocco and that he was the only one who actually stayed and tried to make things right. Of course, later they get help, but at first it is Otis. I also love that Otis eventually dares to speak up when things seem to go not so right.
😍 The reverse scavenger-hunt, aka the bring stuff back and figure out what in Lord’s name has happened last night. I had such a laugh at all the items they found (or were wearing in case of Otis). From a cherub without his winkle (yes, really) to a sausage balloon. The items are eclectic and I just had so much fun walking along with the characters, see them find more friends and then solve the mystery. What did happen that night???
😍 I had such a laugh at all the things that happened during the reverse scavenger-hunt. Because of course it doesn’t go all right. Of course things are going off. Like a donkey running straight to the market to feast on some more cakes. Or when a wee really needs to be weed and then you have to go.
😍 Sausagefest. OMG, a sausage fest? I would love to go, and I am sure my husband would also want to as he just loves sausage. I loved how everything at the fest was sausage. Not just the food, but also band names, contests, and attraction. It made me laugh.
😍 I was so excited for Other Chloe to become a Fun Chloe. One who is done with the Chloes. I was just rooting for this girl! I was first a bit worried that she may just turn out to be still very much one of the Chloes, but as the book continues we see her grow and have so so much fun!
😍 Tiana was such a lovely character. She felt a bit like the big sister that the party needed. \
😍 That the characters were doing weird things when certain words/things happened. I already knew before the characters knew what was going on, so I was eagerly waiting to see when our characters would figure it out. And then comes the next one, why are they like this? I had such a laugh each time Otis wanted to PEE or Chloe sniffing Otis in total adoration which was just a hoot.
😍 Rocco was a big surprise to me. I am normally not that much into rich spoiled boys, but as the story continues we see that Rocco… is totally different from that image. Sure, he has his moments that he just doesn’t get simple things (like, hello who doesn’t know what a wheelbarrow is) or that he acts a bit huffy, but for most I absolutely loved his character growth. He really goes from meh to WOW. He really becomes a wonderful friend and I really found myself rooting for him. I am glad that eventually he learns to be a bit more honest about things. I just hope he doesn’t revert back when he goes to the bigger school.
😍 The cover also definitely needs a mention because I just love it!
😍 The ending was just fabulous! Really exciting and made me roll with laughing. I was rooting for our characters. I did think it was a shame that none of the adults took them and what happened when certain things were said/done seriously and no one helped. Well, in the end someone helped, someone unexpected!
😍 I loved the marriage part. Well, we can at least say that Otis tried. XD Good luck with the rest Otis.
😍 The illustrations were just a perfect match for the book! They made things even more silly and fun!
😍 Also could we get more books with these characters? Especially given that last part?? Please? I need more!!

And just one thing I wasn’t too happy with:
😐 Jagger. And then especially the news he brings on a FRICKING party. I mean, Jagger, boy, I get you were afraid to tell Otis this, but maybe you should have picked a better place and time. Not just all of the sudden and without warning. I am just not a fan of things like this, it happens in more books and it just feels dumb. If these are best friends then be honest. From the start.

But as you can see A LOT of good and boy I had tons and tons of fun reading this and following our Dork Force (their words) on a day they won’t forget! I would highly recommend this one to all~