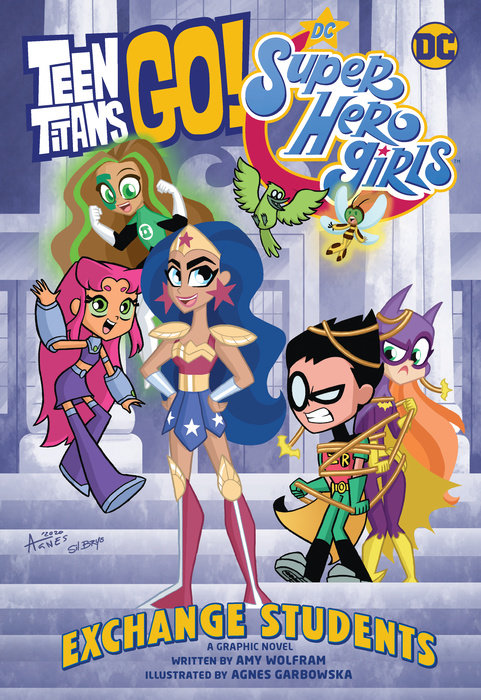 I so so so needed this book in my life! I am a big fan of both Dc Super Hero Girls and Teen Titans Go! so I just had to get this book in which those two universes get together and they fight one (or well, two) villains! In the end I really enjoyed it and OH it was just so much fun~

It all starts when Beast Boy gets the remote of a villain and tries it out on the TV. That is how they find out about the DC Super Hero world and also that a certain someone is there, namely Blackfire. Yep. The big sister of Starfire. The not so kind sister. The one who is so rude (and also to her sister). Of course the group decides to go, I would love to have such a remote as well and just go to another multiverse, see what is up there and what I am doing there. I had such a big laugh though at how the Teen Titans decide to infiltrate. As exchange students, and boy oh boy, someone should have told them about how to look, because I was just laughing so hard. Typical Teen Titans. They are pretty good at being heroes… but other parts are not doing so well. XD

I loved seeing the DC Super Hero Girls and see them try to get along with the Teen Titans. Let me just say that while Star and Green Lantern hit off and become The Besties as Star so adorably says, the others are clashing more. Supergirl is always the strongest and she is paired with Cyborg… it ends with lots of seeing who is the best/strongest. XD Bumblebee is paired with Beast Boy which may work, but we all know how our tiny boy is… not exactly good social wise. Then there is Robin and Batwoman. Yep. Such pairing. And lastly Raven and Zatanna. Which just made me laugh. I think out of all the pairings I liked Star x GL the most followed by Raven and Zatanna. Because despite the glitter and the magic being different they have some parts that match, like cute fluffy beings or tv shows.

It was quite funny when the DC Girls were hiding their superpowers while the Teen Titans already knew it but were keeping quiet. I am happy when they all found out they were superheroes. Well, it took a bit longer for them to work together.

The villains were fantastic, I am especially happy to see my girl Harley there and having a grand time doing crime. Blackfire fitted quite well in the group, though also not entirely as she wanted to go the way of world domination whereas I don’t see our villains go that far.

I do still think it is hilarious that the Girls don’t know that the villains just go to school with them. I love how that works in superhero stuff. That once you wear the uniform/outfit you are unknown. You are someone else.

I absolutely adored how the Teen Titans are in their own style whereas the DC Super Hero Girls and their world are in their style. It was just so much fun! I was  bit worried that they would go for the same style, and this is just so much better and fits really well. It just meshes together.

I do hope that we get the reverse of this book. That the Super Hero Girls go to the Teen Titans world! That would be so fun.

All in all, highly recommend if you are fan of either of the series or both (like me). This was just a fun romp with action and humour and finding out that despite the differences you all can work together.