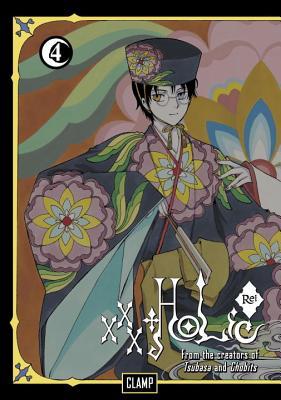 FINALLY! Finally I could read this one and WOW this was just absolutely wonderful!

It took me some years but I finally got the fourth volume. Finally I could continue reading this one. Last week (and with that I mean in January) I re-read the other 3 books because it has been a few years since I read the series and I wanted to make sure I knew all the details again. Vaguely I knew, but not 100%.

In this volume Watanuki wakes from his slumber. Finally he has figured out what he was doing. Why he was asleep. What his plans were. And of course, CLAMP wouldn’t be CLAMP, it all connects to Tsubasa again. Haha, and let that be the one I hadn’t re-read so I was often quite confused. Just like xxxholi Rei it has been 5-8 years since I last read it and that is the main story, I am not sure how far I was in the next series of 3 volumes, so the details are vague. In the end I just went on Wikipedia to read up on what happened. And then things clicked. I was at least right on who was calling Watanuki in the previous volume. There is indeed one person who calls Watanuki Kimihiro. XD The Tsubasa story connecting so closely to xxxHolic is fun, but also heartbreaking. If the party there experiences heartbreak.. the connection with xxxHolic part also makes it heavy there. Causing Watanuki to faint for instance.

Thankfully, there are also other parts. Like Doumeki who brings along something from his mysterious professor again. It is up to Watanuki to figure out in the mysterious xxxHolic way. Aka mostly by doing favours and reading the mood/emotions. There is trouble in supernatural parts as well and I was just so sad to read about it. We got hints in the previous volumes that not all was well for the Gods and supernatural beings. People are just building everywhere, there are less and less spots for the youkai, and not only that. People are believing less. I just wanted to hug so many characters in this one.

I was proud of Watanuki though. Yes, it is a tough life he is having now. He is still fairly young but he already knows he can never leave. However he is making the most of it. Thankfully, he has many people (and Mokona) around him to make sure his life is vibrant and energetic. I love how mature he is these days and how he learned how to treat the customers, how to make sure it is a fair trade. We have seen that at times it wasn’t easy, sometimes he was just too kind or he didn’t know what would be good. But in this one? We see him get favours and know what to do next. Know what to do to make the exchange right.

Oh, and I hope that Watanuki takes of his glasses more often, haha, he looks way cuter then. XD

I had tons of fun reading this one… and now I guess the wait begins again. The hope that CLAMP continues this one and doesn’t take endless, then again, given that this one originally came out in 2016.. it has been too long already. 😐 sighs

All in all though, I would still recommend this series (and make sure you read Tsubasa as well) to everyone.