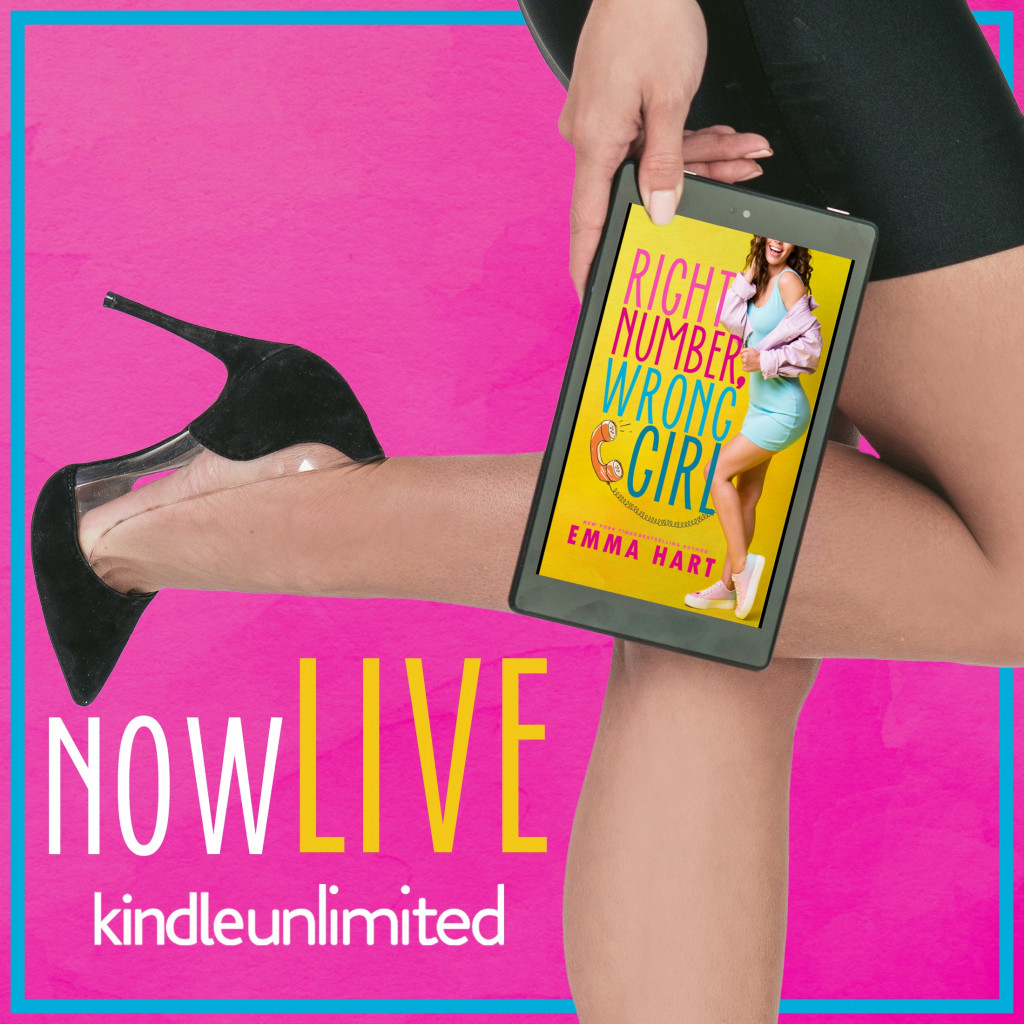 Welcome to the Blog Tour for Emma Hart’s newest book: Right Number Wrong Girl! A case of mistaken identity, tons of chaos and humour, and romance! I love the sound of it and so I am happy I can tell my readers all about this book~

Taking a work call for my best friend in my undies? Check.
Filling in for her after an emergency and getting mistaken for her? Check.
Royally messing it all up until the hot duke-in-waiting I hate but can’t keep my hands off steps in to save me? Uh, check…

Yes, yes, that all sounds wonderful, doesn’t it? Until you consider I now have to plan and execute an 80th birthday party for the Dowager Duchess of Devon, and I can’t organize my hairbrushes. The current duchess is the ultimate type A personality, determined to micromanage the entire thing.
I’m a type… XYZ . . . LMNOP . . . Maybe not even that.
When all my attempts go to hell in half a handbasket—I can’t even mess up properly—the only hope I have to pull this thing off is duke-in-waiting Hugo Edwards.
The dreamy, handsome, makes-my-heart-pitter-patter, arrogant tosspot Hugo Edwards.
He and his brother are the only people who know who I really am. The success of their grandmother’s party relies on us getting along long enough to make it happen—and me and Hugo keeping our hands off one another behind closed doors.
None of which is easy to achieve.
When my best friend shows up to take over from me, the fact that I’ve fallen for Hugo is the least of my worries…

Emma Hart is the New York Times and USA Today bestselling author of over forty novels and has been translated into several different languages.
​
She is a mother, wife, lover of wine, Pink Goddess, and valiant rescuer of wild baby hedgehogs. She lives in North Wales with her family, three cats, one very large dog, and an undetermined number of chickens and ducks.
​
She’s known for her hilarious, sarcastic romantic comedies with wildly inappropriate grandparents, and has been dubbed “The RomCom Queen” by her readers.

He turned to me. “I don’t see a car outside. Did you drive here?”
I paused. “No. I cycled.”
“You cycled?”
Evelyn snorted, getting up. “People do use things other than cars to get around, you know. Back in my day, cars were for the rich.”
Hugo slid her a look. “You were the rich. You are the rich.”
“Good point. Never mind, then.” She winked at me, adding a cheeky grin to it, and walked towards the door. “I trust you’ll be taking Camilla back to her cottage.”
“Oh, it’s fine,” I said, right as Hugo said, “I won’t be passing there.”
Evelyn stopped dead in front of him and craned her neck to look up at him. “It wasn’t a request, Hugo.”
He rolled his shoulders. “Understood.”
“That’s what I thought.” She tapped his leg with her stick, and he stepped aside to let her pass.
It was abundantly clear who ran the roost around here.
Hugo sighed the second she’d disappeared. “Are you ready?”
“You don’t have to take me,” I said, picking up the rucksack and slinging it over my shoulders. “It’s really not far by bike.”
“I don’t want to take you, but the idea of Grandma finding out I didn’t is something I like a whole lot less, so let’s go.”
“I have Nora’s bike with me. I can’t just leave it here.”
“I’ll throw it in the back. Come on.” He motioned for me to follow him again, and I begrudgingly did so.
I could not think of anything I wanted less than to spend time in an enclosed space with Hugo. Or any space, really. We’d not exactly hit it off at the pub, and that was clearly a theme we were going for given that we’d sniped at one another every time we’d spoken.
So sitting in a car?
No, thank you.
“I’ll ride the bike back,” I said when he opened the front door.
“Just let me take you. I’m trying to be nice,” he huffed.
“You’re only being nice because she told you to be. You’re not doing it out of the goodness of your heart. There’s a difference.” I stepped outside.
He followed me, pulling the door closed behind him. “Either way, think of it as an olive branch.”
“I’m not a fan of olives.”
“Of course you’re not.”
I gave him a withering look, then sighed. “How are you going to get the bike back? Do you have a bike rack on your car?”
“I have a pick-up truck.”
I blinked at him. “What is this? Little Texas?”
Hugo scratched his cheek. “Look at where I live.”
Pointedly, I turned around and stared at the huge manor house. “Downton Abbey?”
He licked his lips and looked up.
I swear.
If he did that counting thing he did with his Grandma…
“Don’t start counting,” I warned him.
His gaze snapped down. “You caught that?”
“You have the discretion of a pick-up truck parked outside Downton Abbey.”
“Maybe I should count to ten instead of three with you,” he muttered, walking over to where I’d left Nora’s bike. “It might make me be able to be nice to you for real.”
“I’m not a child.”
“You’re acting like one.”
“So are you.”
“Fair point,” he agreed, wheeling the bike over. “Come on. I’ll toss this in the back and take you there.”
All right. Fine. I clearly wasn’t winning this argument, and even if he was only doing it because Evelyn had made him, I’d accept the olive branch.
At the end of the day, he knew I wasn’t Camilla.
I was loathe to admit it, but I needed his help.
It meant I’d have to try to get along with him.
“Thank you,” I said, watching as he carefully put the bike in the bed of a muddy black pick-up truck. “So why do you have this miniature lorry?”
He chuckled. “Exmoor.”
“You’re going to have to elaborate.”
He opened the passenger side car door for me. “I’ll explain on the way.”
“Thank you.” I put both my bags in the footwell looked at the truck.
I was five-foot-three.
These wheels were almost bigger than I was.
How on Earth was I supposed to get in there? I supposed I was going to have to haul myself up and hope for the best.
I braced my hands on the seat and the door, took a deep breath, and yanked myself up. My hand gave way on the soft fabric of the seat, and my foot slipped on the metal step. My life flashed behind my eyes, and I was about to scream when Hugo grabbed me from behind.
He wrapped one arm around my waist and held me against his body. My heart pounded uncontrollably, and I didn’t know if it was from the fear of my near fall or because I was nestled tightly against him.
He had a very firm body.
It wasn’t the worst thing I’d ever been pressed up again, for what it’s worth.
“Need a leg up?” His lips were far too close to my ear, and his words were said on an exhale that skittered warmly against my cheek.
Yep.
Yeah.
Yes.
The heart pounding was definitely from his closeness.
This was an unwelcome development.