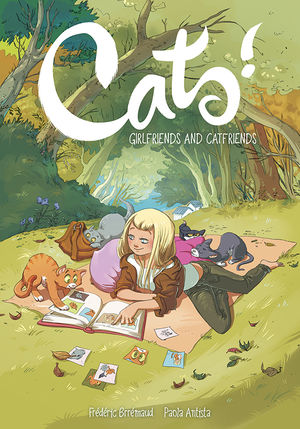 A fun bundling of the last 3 books in the series! Lots of cats, humour, and some facts!

What do you do when the Dutch edition of this one stops at #4? You see if there is another edition! And then I found out that in English books 4, 5, and the final one #6 were bundled together! It did mean I have to re-read the 4th book, but I didn’t mind, it’s been almost 4 years since that happened, so I knew that while I would recognise things, it wouldn’t be all of it.

I really had fun reading this one. Going along with Manon, Erika, and Camille. Well mostly Manon! We see her go on vacation, write in her diary and work on things, get ambushed by her cat Grapefruit (endearingly called GrapeGrape), frustrated at her cats ways but also loving him dearly. We also get to see some of her youth, or well, I am going with that, haha, it took me a while to get back into that storyline. Still a tad unsure how I felt about it as Manon was really a crazy catgirl when she was a girl. From pretending to be a cat to dragging cats home to ask their parents on what gender the cats are.

The other girls, Erika and Camille, also have their loves and dislikes with their cats. One of them has a cat who is in a relationship with a mouse (yes, really) and who really needs to diet but it never works out because the cat is just way too smart for that. And the other girl has a cat who keeps eating the fish and doing some other hilarious things (including losing all their hair during Christmas).

It was also fun to see the girls get together or call each other. Generally with the cats or their conversation is all about the cats. These girls are all about their cats.

I laughed so much! Because it was just all so hilarious. Those cats get up to so much, and not just the pets of the girls, but also the cats in the neighbourhood. Like Manon had an issue with Grapefruit peeing in sinks (shower and kitchen) and found out about some special cat litter stuff. Close the window next time. Haha.

One thing I wasn’t a fan of… that brother of one of the characters. Using someone’s cat allergy to steal candy. WTF? People, really. WTF is wrong with you?

The art is also really fun and I love the style. It made the cats hilarious stuff even more funny.

All in all, sad that now the series is truly over. I wish that the publisher would still bring these out in Dutch as to complete the series, I am sure there are more people waiting.

I would recommend this fun series to all. Be prepared to laugh a lot!