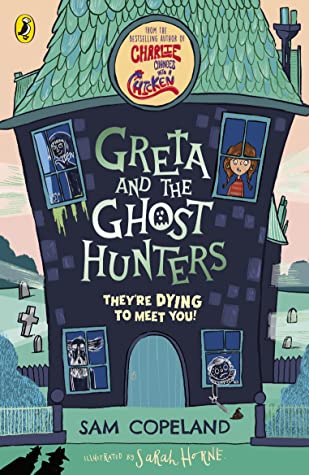 A spooky and laugh-out-loud book about friendship, family, and more!

I was so absolutely hyped that Sam Copeland (and Sarah Horne) were collaborating on a new story again! This time ghosts and crazy plans! This review may be a bit chaotic, because BOY I got so many feels!

Poor Greta, when we first see her she has a deadly accident and that is a red thread through the book. At times I just wanted to step in the book to give Greta a big hug. Tell her that it would be OK. That the outside may be scary, but that it can also be a fun place. I loved how hard she was fighting to keep her grandma in her home, and how she kept trying to get some sense in her parents.

I loved grandma, though I was a bit sad by one revelation early in the book! I had so hoped for something else! I did love the bond between grandmother and grandchild. Love that they had each other and so I was rooting hard for Greta to be able to hold her grandma close to her. Because putting her in a home will mean that Greta will barely see her grandma. That she will be all alone again.

I loved the three ghosts. Yes, they were a tad annoying, at least in the beginning, but then later I really started to like them, so so much. Grandpa was at first so rude, but then as we learn more about him, and how he does things, you just know that despite the grump he is actually very sweet and cares a lot about his family. About his wife, about his grandchildren. He really tried his best as the story went on. And Percy, who is a bit too much about witches, is actually just a boy who wants someone to love and remember him. He needs a friend. A family. You do have to poke through some things because haha, throughout the story he sticks a bit too much in his olden ways. XD And then there is Wolfgang, I loved that he was the narrator and that he also took the role of MC. I had to get used to him because he was in ways even grumpier than grandpa, but he also had, as Greta aptly tells him in the story, a heart. Even if he hides it in darkness and sadness. I had such a laugh btw to the name of his town.

The ending was fantastic, very sad though because of all the things that happen there. There are also happy moments and moments that made me go HAHA! I really like how the author wrote this all and how it all came together. So proud of Greta as well!

The art was just FAB! I loved the way the ghosts were drawn~

All in all, highly recommended! This was just tons of fun.

2 thoughts on “Review for Greta and the Ghost Hunters”