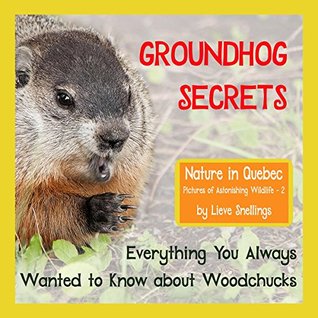 We don’t have groundhogs here in my country, but I do love the little creatures and always eager to learn more about them! And I thought it was fitting to read to read this book now (Feb 7th) because it has just been Groundhog day, a day that is still a bit odd to me, but also I find it an interesting tradition.

I love that this book is told from the POV a groundhog named Margot (love her name) and that she is going to tell us, the readers, everything about herself and her family. From where she lives (in Quebec) to what she eats (yummy clover, alfalfa, and berries and seeds, oh and the occasional egg) to their teeth! I do think that saying they are herbivores but then saying they eat meat (insects etc.) was a tad odd, I think it would have been better to say they are primarily herbivores. Because now it just seems you are describing omnivores. I didn’t know that groundhogs loved salt that much and would even lick the roads (which seems dangerous, but I guess they just cannot resist, so people watch out). And there is tons and tons of information to learn and read up on! I learned a lot while reading and I love it!

I didn’t know that groundhogs were called woodchucks! I already learned something new by page 9! Nice!

But groundhogs aren’t the only one getting a chance to tell their story! We also meet various creatures in the Sciuridae family. I had fun with that interlude and reading about various squirrels/chipmunks~

While I did love the book and all the facts I learned, I do feel it was a shame that it got so monotone. That it was just facts after facts. I would have rather seen the story mix and mingle fiction with non-fiction. Read about her adventures and along the way we get some facts.

There are tons of cute photographs though! Of Margot/other woodchucks and other cute animals. I really loved seeing those!

All in all, despite it getting monotone, I still had fun reading this one and I learned a lot. Also cute photographs is always a win for me! I think this would be a nice addition to classrooms.