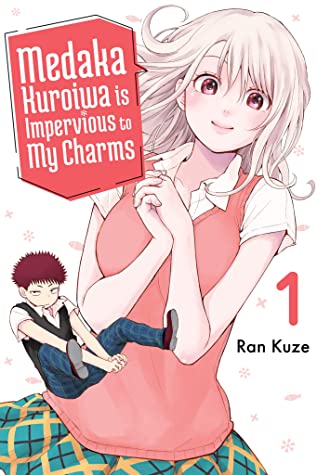 I received this book from Netgalley/Publisher in exchange of an honest review.

What do you do when you are the hottest girl in school and have one guy who is just impervious to your charms? You go hunt for him. Apply all the sexy tricks in your books to him… but will it work?

I really had so so much fun to read this one! I absolutely loved the premise and I was curious how this one would go. I mean, it could go two ways. Both I have seen in manga/anime. One way is that she tries and then gives up to make his life miserable… or the other way in which she never gives up and she keeps finding new ways to get him to fall for her. And in this manga it was the latter one! This girl is determined and BOY she is not giving up. Now if only she can realise that she is not doing this for getting that last boy to fall for her and that everyone loves her in school, but that she is actually in love with him and wants to be with him. XD

Mona-chan was just adorable and I loved seeing her try all sorts of things to get Medaka to notice her. From acting like a kitty to showing a bit of skin to just getting him in the nurse office for some alone time. She really tries everything (even some cliché stuff) and I kept looking forward to seeing both of their reactions. Yes. Because Mona has some wonderful reactions… but Medaka has those as well! I loved that she didn’t give up and that she kept trying. I also loved seeing her real personality a bit more. And that one isn’t bad either! I do have to say that I did feel sorry for her, at the beginning it was mostly a bit of a game to her and while she was hit that he didn’t care, it wasn’t until later that she almost cried and felt so horrible that he just didn’t seem to care. I really wanted to give her a hug and some insight in Medaka’s mind. That he didn’t mean it in a mean way.

Medaka. I just loved that we got his POV at times too and learned why he was acting the way he did. Apparently his family lives at a shrine and are priests.. and he is also entering that priesthood. So throughout the manga we see him both be happy that Mona has attention for him, but also try to ward off all those worldly desires with prayers and scary faces. I do hope that he is able to choose what he wants or at least is honest with Mona eventually.

I was very worried when a new character was introduced, namely Haruno-san. She is a girl from Medaka and Mona’s class and she has a big crush on Mona. Sadly, I have read a few too many manga (and seen a few too many anime) that have these characters and they are often quite yandere. So I was worried that she may act weird when she found out about Mona’s crush on Medaka. Thankfully, she is not bad at all. She even dubbed herself the guardian of these two their romance which had me both laughing and delighted. I loved seeing her keep track of our duo, make cute photographs of Mona, and more! She is a really fun character and I am so happy that the author went for the best route possible.

There is a tad of drama at the middle/to the end because Mona thinks that Haruno-san is also after Medaka. I wasn’t too big of a fan of that, though I also had quite a few laughs at the wild ideas that Mona had in her head! Not to mention the pouty expressions were brilliant. XD

The last chapter made me smile! And then gasp! NO, you cannot end the volume like that! NO. Just no! I need to know more! Argh! Well, I guess I will have to wait “patiently” for the next volume!

I really liked the art! As I said a few times, the expressions are really top notch, but also other parts are well done!

All in all, if you want a silly manga that has you rooting for two characters to get together be sure to check this one out!