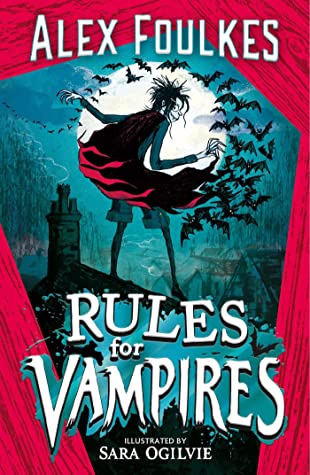 A wonderful bloody fantastic book about a vampire, a good ghost… and a bad ghost!

This was a wonderful read! Vampires, Ghosts! And so much more~ I wrote a good/unsure/meh review, because I am just tired + have so much more to write. Haha.

😍 The cover!!! It was so awesome!
😍 Margred! She was so sweet and awesome, I am still very curious what she is, a ghost? Just an empty suit of armour with a soul (a bit like FMA?). Anyway, I loved her and all she did for Leo. She was so caring and I loved what she did near the end!
😍 Rodrigo! OMG, he was such a fantastic character! He made me laugh and he reminded me a tad of Colin from Mr. Penguin series.
😍 Leo was a fabulous character and I really wanted to hug her at times. She definitely doesn’t have an easy time, but she is working hard and she tries her best. Not just with figuring out the Hunt and ghosts, but also figuring out herself and her family.
😍 That there are 7 nights, well, OK, less than that, but you will have to read the whys and hows in the book. I really loved that there was a time limit, it made things a tad more dangerous and exciting!
😍 Exploring the castle in which Leo lives! Seeing the big library which I also wanted to visit, well, maybe with some precautions given that the library is a bit alive at times, but I still want to dive in and have a day or more with just walking around, picking up books here and there and read them!
😍 The illustrations! I just love Sara Ogilvie’s art and I am so delighted to get a lot of them in this book! Her style really fits well with the story and I love the character designs.
😍 Learning more about Leo and her sister and how they became vampires. Well, we don’t know all about Leo yet, but we did get hints. It is quite sad, but also interesting why the mom picked them to be her vampire daughters.
😍 Learning about ghosts and what they do. Also how to get rid of one (which involved quite the quest for items).
😍 I love that there is something like a birthnight and that one one particular one you have to do a big Hunt. I was definitely rooting for Leo! Plus, I totally agreed with several characters near the end on the outcome of the Hunt. I won’t spoil anything, but it made me smile.
😍 The prosthetic leg! Leo has one because of an incident with her Grimwalk and I love it (well, not the incident that was just sad, but that someone in a book has a prosthetic leg). There aren’t enough books with characters, especially kids, with prosthetics and I can just imagine the happiness at seeing someone with one in a book!
😍 The latter part of the book when they battle the Orphan Master! Holy crap, that was just one big rollercoaster and I was totally curled up in my bed, hoping that both these characters would be fine. Leo especially goes through a lot and I was just so worried and stressed out! I know she is the MC and this is a children’s books, but you never know these days! OMG!
😍 The ending. Both happy and a tad of sad because of farewells, but also ominous. I am quite curious about that last glimpse and I was immediately thinking of who it could be.

😐 Minna. I am still very unsure about her. On the one hand, kick-ass girl with a big attitude. But on the other hand… she was so angry all the time while Leo did her best. But whereas you as ghost just don’t have any family or bonds with people, Leo has. She has a family. She has her responsibilities at home. She cannot go out 24/7. You can get angry with her, but seriously, Leo worked HARD and you should also see that she is trying, and I felt that Minna wasn’t appreciating Leo enough. They are in this together, so get together and stop being so angry. Understand that she has a life and cannot just hop skip off.

😖 Emmeline. Aka the little sister who is actually the bigger sister. I just wasn’t a fan of her for most of the book. Yes, she and Leo did things to each other, but Emmeline took it way too far at times (I mean ruining someone’s bedroom because of a bucket of frogspawn…) or blackmailing her sister, and I was just sick of her attitude and how she constantly made Leo feel like crap and having to worry all the time. Because Emmeline will use whatever secret she can learn from Leo against her. I do love her design though and I think it is pretty brilliant that she is a toddler (with a great fashion sense), though I guess Emmeline is not too amused by forever being tiny.

But all in all, I would highly recommend this book to all! This was just so much fun!

2 thoughts on “Review for Rules for Vampires”