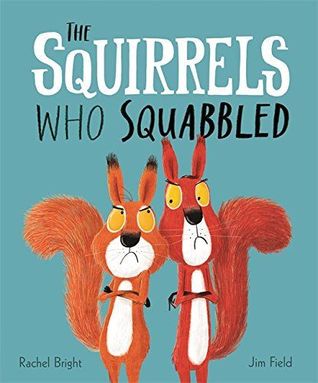 A hilarious fun book about two squirrels who squabble about a pinecone! Leading to hilarious situations.

I read this one in Dutch, but I just had to share my review in English with the world, because this book was hilarious and adorable!

Meet Cyril and Bruce, well, OK, at first we only meet one of them. And I would call him the lazy one. Whereas everyone is already hoarding for Winter and making sure that Winter won’t suck because of cold AND hunger, he is just lazing around. I loved his sudden dedication to that pinecone. To that one thing. Like, you had all these months to gather, you don’t need to make such a fuzz if you had just done it easy. Oh, well, then we wouldn’t have this funny book!

Because someone else also has the pinecone on their mind. And that is a squirrel who already has his house full to the brim… but there is always room for more!

And what follows next was just one slapstick hilarious situation after the other and it reminded me at times of the movie series Ice Age. Because these squirrels are so close each time and then BOOM, something happens. And there we go again! I just laughed so hard and I wasn’t even sure who to root for as in my eyes they both deserved that thing by now. Haha.

The ending was an exciting rollercoaster and then one of sweetness and happiness. I am so proud of both of my boys and I hope that they will have great winters and seasons coming.

The art, WOW. Jim Field did it again people, he did it again. Mesmerizing colours, wonderful action scenes, it was as if I was there! In the midst of all of it! Love it!

All in all, I would recommend this adorable, fun, action and humour-packed book to all! As for me, I hope there will be more books in this series, as I have read them all now~

3 thoughts on “Review for The Squirrels Who Squabbled”