Welcome all to the Book Blitz for The Memory Keeper of Kyiv by Erin Litteken! I am so excited to be part of this tour as this book is the kind of book I am very interested in. I got a few historical periods that have my interest and this one is one of them. This book is definitely high on my list to read.

For today’s post I got a whole lot of things. A few small excerpts/teasers, a big excerpt, a giveaway, and book/author information.

Let’s get started on this blitz~ 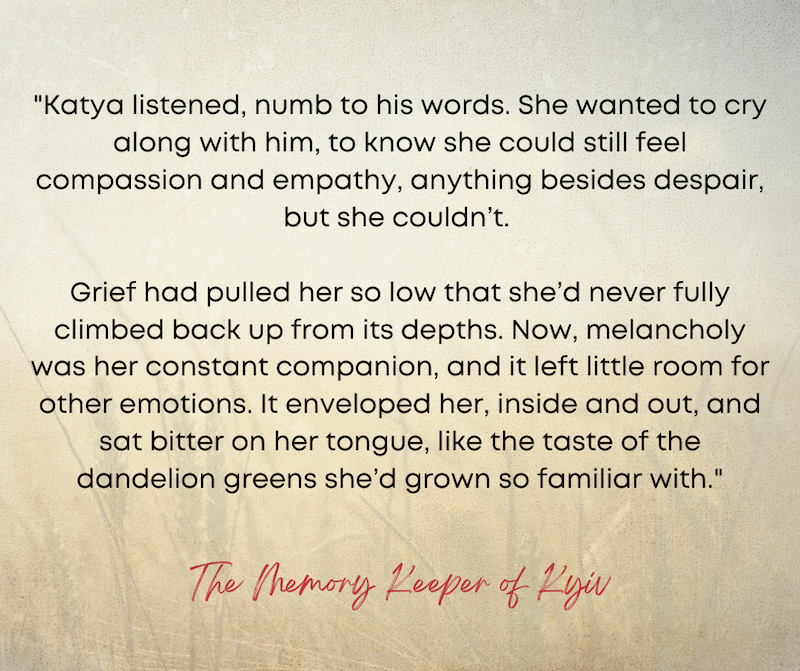 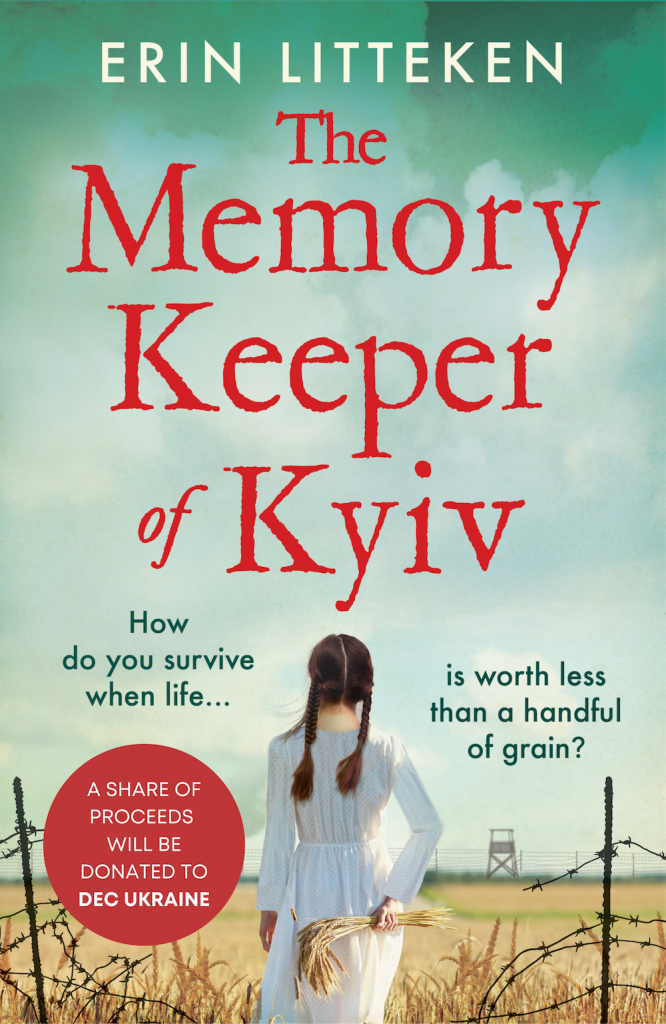 Perfect for fans of The Tattooist of Auschwitz and The Beekeeper of Aleppo.
“A powerfully moving debut . . . Ukraine’s tragic history painfully echoes its current crisis, and on every page the Ukrainian spirit shines out, unbowed, unbent and unbroken. This is a compelling, timely read.” Kate Quinn, author of The Rose Code

In the 1930s, Stalin’s activists marched through the Soviet Union, espousing the greatness of collective farming. It was the first step in creating a man-made famine that, in Ukraine, stole almost 4 million lives. Inspired by the history the world forgot, and the Russian government denies, Erin Litteken reimagines their story.
In 1929, Katya is 16 years old, surrounded by family and in love with the boy next door. When Stalin’s activists arrive in her village, it’s just a few, a little pressure to join the collective. But soon neighbors disappear, those who speak out are never seen again and every new day is uncertain.

Resistance has a price, and as desperate hunger grips the countryside, survival seems more a dream than a possibility. But, even in the darkest times, love beckons.

Seventy years later, a young widow discovers her grandmother’s journal, one that will reveal the long-buried secrets of her family’s haunted past.

This is a story of the resilience of the human spirit, the love that sees us through our darkest hours and the true horror of what happened during the Holodomor.

“I never imagined the release of my novel on a past oppression of the Ukrainian people would coincide with such a parallel tragedy.” Erin Litteken

May we never forget, lest history repeat itself.

A share of proceeds will be donated to DEC’s Ukraine Humanitarian Appeal. 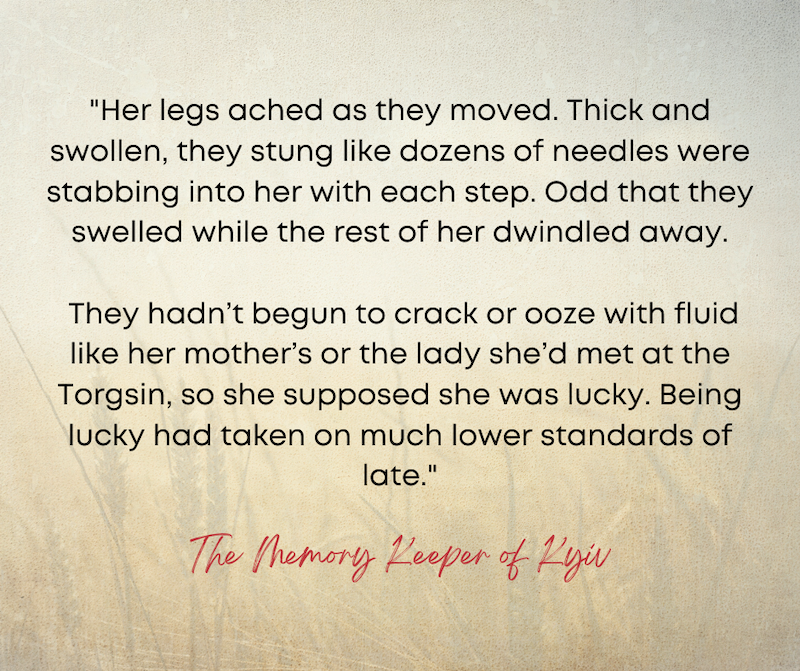 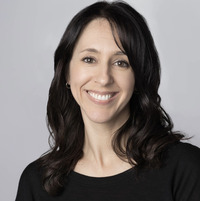 Erin Litteken is a debut novelist with a degree in history and a passion for research. At a young age, she was enthralled by stories of her family’s harrowing experiences in Ukraine before, during and after World War II. She lives in Illinois, USA with her husband and children.

A sharp click echoed in the room, and everyone froze. The Russian’s cocked pistol pointed at Tato. “Are you resisting orders? If you are, we will have to label you an enemy of the people. We all know what happens to enemies of the people. I could shoot you right now, and nobody would care.”

Katya’s head buzzed. All the anger she’d felt morphed into sheer terror as she stared at her Tato. His beet-red face glistened with sweat and his hands curled slowly into fists, the anger crackling off him like a hungry fire seeking fuel. If someone didn’t intercede, he would be shot for attempting to murder Prokyp with his bare hands.

Mama, too, saw his inner struggle, for she stepped in front of Tato and spoke calmly. “I apologize for my husband’s behavior. He’s overprotective of his daughters. He didn’t mean what he said. We’ll cooperate, I swear it.”

The Russian smirked and lowered his gun. Dropping Alina’s hand, Katya pulled her father into a hug and spoke in his ear. “Please, Tato, there is no harm done, but we can’t lose you. Please.” She felt the tension lessen from his body, but vibrations of anger still throbbed like the veins on his neck.

Prokyp watched the scene with amusement, then sauntered back over to his cohorts, smiling. The Russian turned to him and asked with complete sincerity, “Have you been offended by this man? What would you like to do, Comrade?”

Prokyp glanced at Tato and then at Alina, who was white as a sheet, but holding her head high as Mama had taught them to. Katya’s legs wobbled, so she locked her knees and held her breath as they waited for this fool to decide the fate of their family.

“I suppose I can overlook it this once, as long as he and his family promise to cooperate fully in the future.” His gaze lingered on Alina. “But we shall have to check back here often to make sure they are behaving.”

Another activist pushed into the house with a large sack of wheat balanced on his shoulder. “I found this, and another just like it, hidden in the barn loft.”

Katya’s heart sank. She’d worried the wheat in the barn wasn’t hidden well enough, but Tato thought it safe out of sight beneath the hay.

“You can’t take that!” Tato shouted. “It’s my seed for planting this fall!”

“This will pay your quota. For now.” The Russian Soviet waved a hand dismissively, as if suddenly bored by them. “Come, we must move to the next house.”

The woman cast an apologetic look toward Mama and hurried behind the men as they left. The door swung wildly in their wake, and none of them moved until Tato strode forward and slammed it shut, though not before Katya saw the activists’ cart stacked high with sacks of grain, just like the ones they’d taken from the barn.