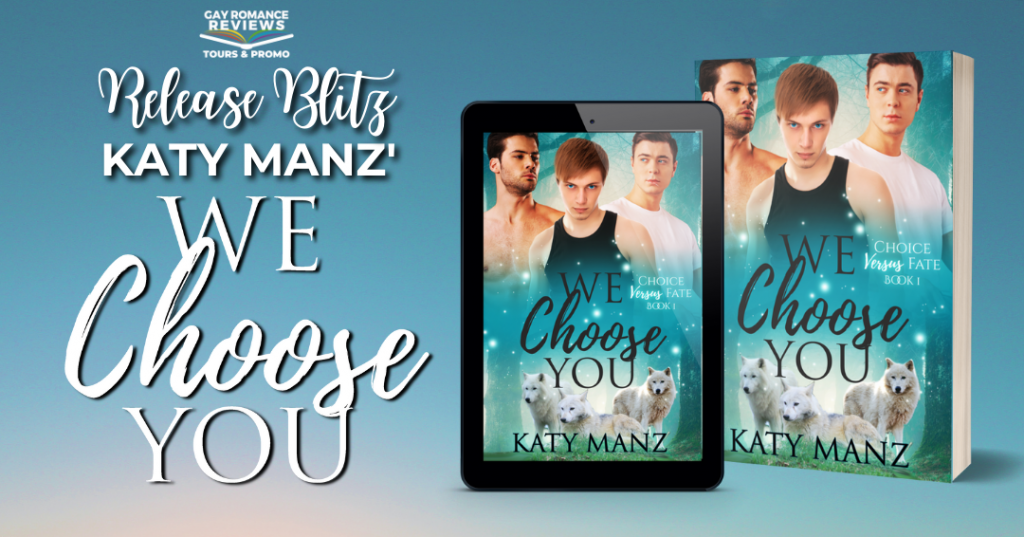 A sizzling welcome to the Release Day Blitz/Tour for We Choose You by Katy Manz! I am so excited to be part of this tour! I just love paranormal MM shifter books and this one sounds right up my alley and I need to read it! Now!

For today’s post, phew, I got a packed post! There are teasers, you can read an excerpt, you can join a giveaway, and of course I also got book/author information!

Are you ready for this tour? To celebrate the release? Let’s get started then. A big big congrats to the author~ 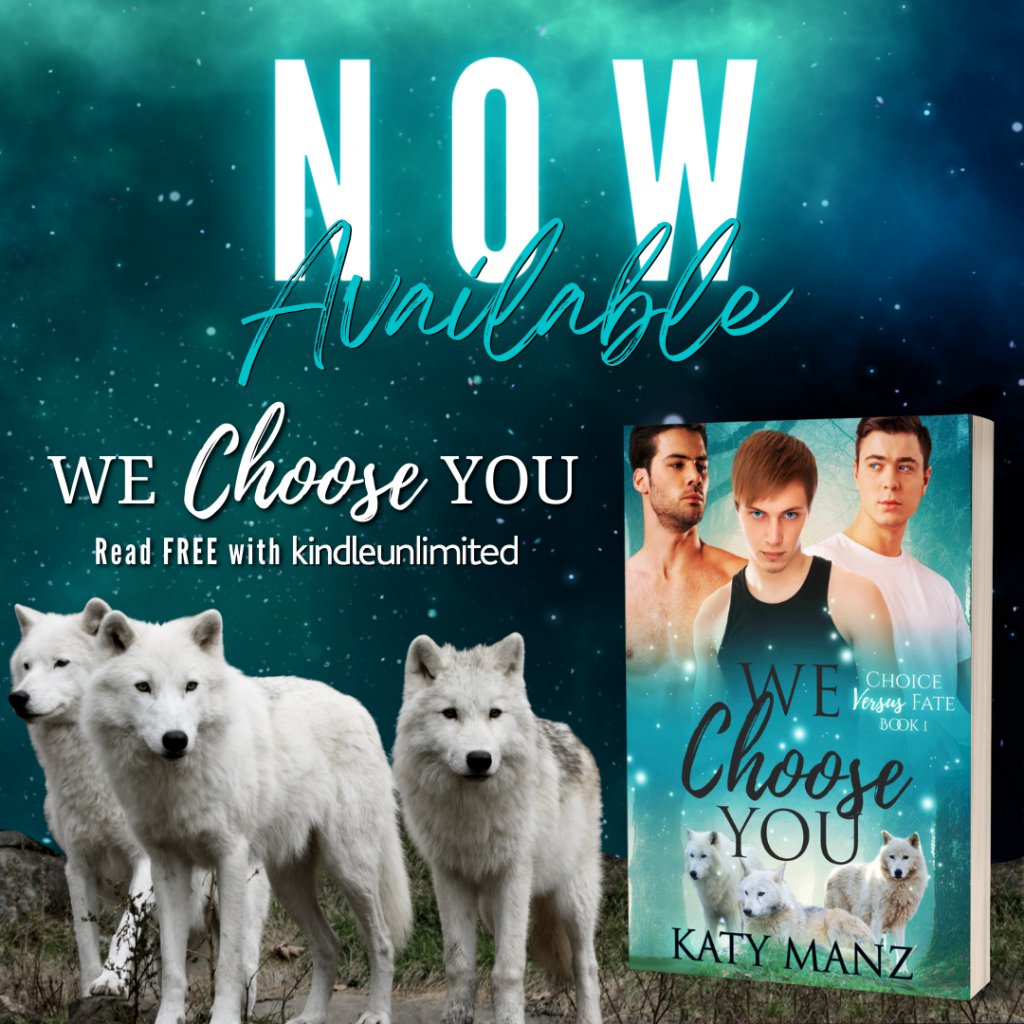 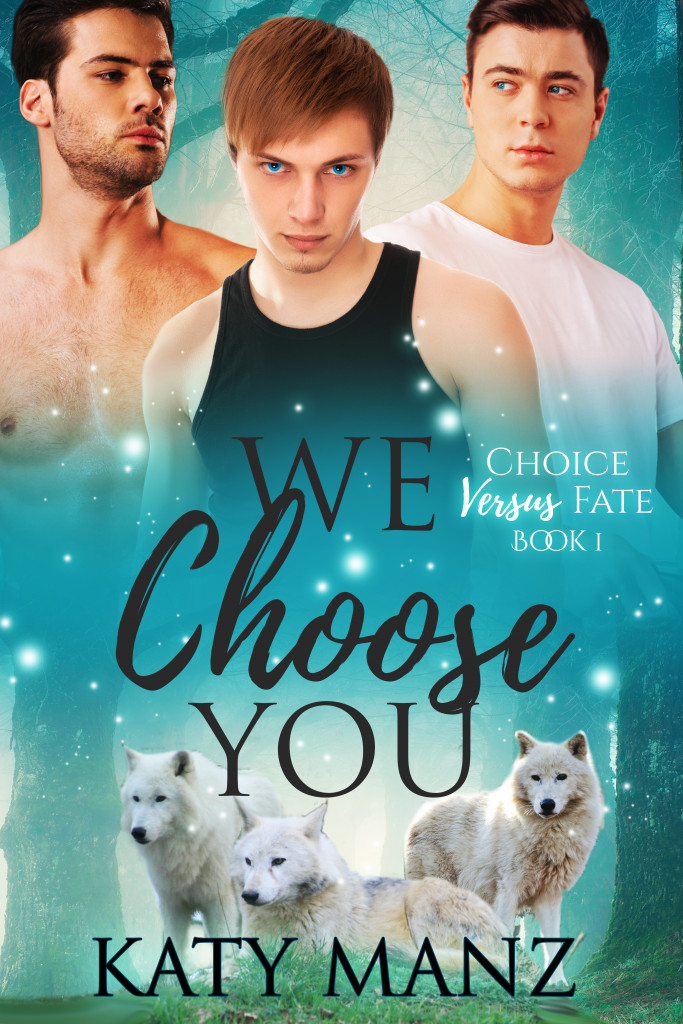 James and Aidan didn’t need fate. They had each other.
Alpha James and Beta Aiden love each other and don’t care what fate has to say about that. Mating doesn’t need to be based on pheromones and scents. And kids? There were many ways to build a family.
When fate comes knocking years later, James does what any wolf in his situation would—he runs away. He has a mate he loves more than anything, and they’re just about to get everything they want: a family. He can’t risk losing everything because Fate decided to be a butt.
Omega Riley scented his fated mate once months earlier, and the wolf ran away. He is coming to terms with his singledom. Everything is going as well as it can, that is, until his fated mate’s children walk into his classroom.
We Choose You is book one in the sweet with knotty heat MM shifter mpreg romance series: Choice Vs. Fate. It features an alpha wolf shifter who mated his beta best friend, the omega sent by fate, true love, twins who will steal your heart, adorable babies, and a guaranteed happy ever after. 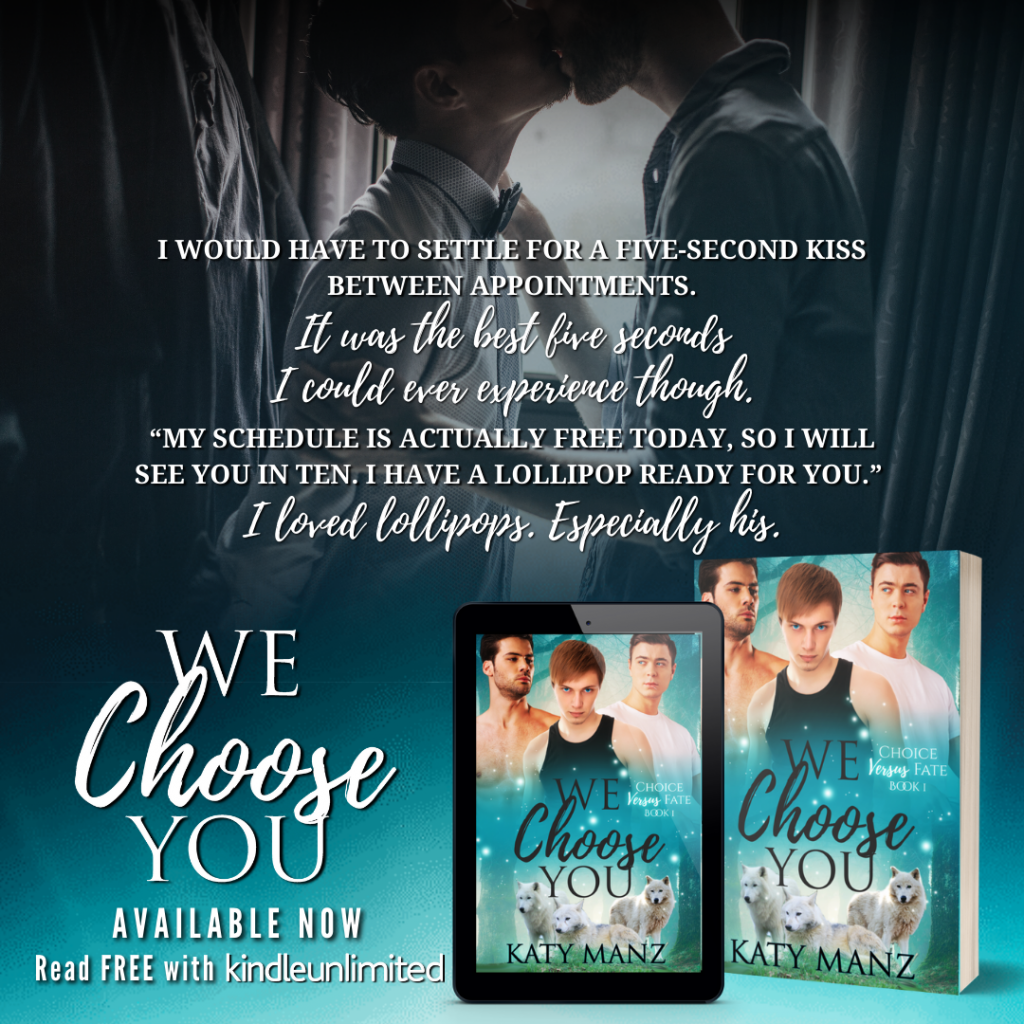 Katy Manz has always dreamed of being a romance writer. She wanted to bring the stories created in her mind to a world of readers that would fall in love with her characters as much as she has. Keep a look out for more books in this series and future series to come. 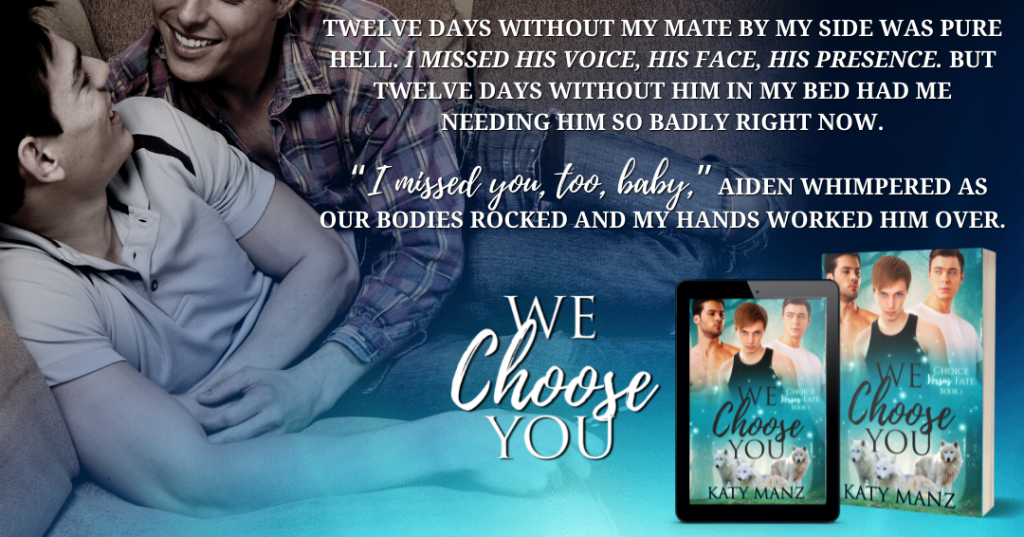 Only I could end up in the ER as an adult for getting a building block stuck in my nose. It should be one of the dozen or so kids under the age of five who I worked with here right now waiting for the on-call doctor to help free the annoying toy. But no, it was me, the grown-up charged with keeping them from doing it.
I was the grown man who got such a thing lodged in his breathing hole. I tripped over Eddie’s missing shoe while Andy was holding up a building block to show me it was his favorite color. The fates decided I had to be laughed at more in life. The kids all laughed, at least, except poor Andy who cried thinking he hurt me.
Luckily, it was a quick fix, more embarrassing than anything. Now, I needed to meet my friend Leslie in the hospital cafeteria, and we could pretend this day never happened.
“Hey, blockhead,” Leslie called out from across the cafeteria, making me vow to tell anyone who would listen about when she threw up after her first time watching a five-year-old eat his own booger. Note to self: get more embarrassing stories about my best friend, pronto.
“Seriously? Can we pretend today never happened and we came here to ogle hotties in lab coats and scrubs?” I asked as a nurse strutted past us and put a bit more swagger into his walk. Yum.
“Nope. But I will let it go for now. Was the doctor cute at least?”
“There’s my bestie. Always about trying to get some action! And to answer your question, he was all right. But definitely an omega, and so not my type.”
Her eyes widened, and a slow smirk grew. “Omega? Oh, mama likes them smart and steamy. Show me.”
I laughed at Leslie. “Sorry, hun. From the ring on the finger, the bump of his belly, and mark on the neck, that omega was spoken for and very happily so.”
“Figures. Oh well. One day I will meet the omega of my dreams. Maybe they’re too busy creating the next medical breakthrough. Or discovering life on Mars.”
All I could do was shake my head. Yes, one day it will happen but for now, I need food. “Did you want to grab something to eat?” I motioned toward the prepackaged sandwiches. “Or should we go grab something from the café, perhaps?”
“Um, yeah. Let’s go with the café. I would die for one of those delicious flatbreads they had the other day.”
Leslie and I grabbed our stuff and started toward the door. As we reached the exit, we saw two alphas standing near the doors, and my world stopped.
Growing up, we were told of the moment your soul recognized its fated. And everything I was warned about happened. The instant connection pulling me to them and the heat of recognizing only that person could satisfy me.
What wasn’t covered was what to do when the fated got a look on their face like the worse news was delivered to them and took off running in the other direction.