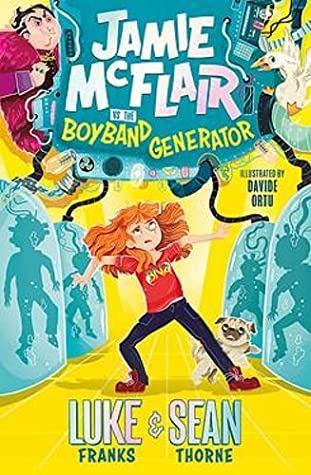 A book about boybands, friendship, evil uncles, and much more!

In this book we meet a girl named Jamie McFlair (love her name) and see how much she is willing to do for a boyband she absolutely loves! I really liked Jamie McFlair and had fun following her adventures in this book!

I loved her friends, Mel, Daisy, Jenner. Especially Jenner was a surprise to me. I thought I may not like the character much, but in the end she was one of my favourites from the friendgroup. I love how she is sporty AND smart and how she can hack like a pro.

I loved how it is a rollercoaster from the start. How quickly things go from Oh look boybands and a girl dedicated to it to OMG her uncle is so evil and OMG what is he doing NOW? Will they be able to save the boyband? Will Barry keep on feeding people to sharks (what is up with that, is this James Bond?).

And I mean, I did like the idea of a generator for boybands. Make the most boring guys into sexy, singing, superstars. It reminded me of the Powerpuff Girls. A little dimple here, some fancy hair there, a few skill moves, and voilà you have a boy who can do anything! OK, sure, it is also a bit creepy, but for most I loved it. Just don’t think where he gets those ingredients, which comes even closer during that party.

While I did like (or should I say tolerate) Barry’s POV in the beginning… I was quickly bored, annoying, turned off from it. In fact, that is also the biggest reason why the book went from a nice 4.5 stars to a 3 star. Because I just struggled to get through those POV of evil Barry. They made me like the book less and less. I found myself even considering just DNF-ing it at times. People who read my reviews know that I am generally not a fan of villains getting a POV, it is a very RARE occurrence to like them. That was why I was hoping that, because of the first part, I may just like this one. But no. It just went to the pile of no thank you villain POVs.

Also the grandma… she did have her moments, but sometimes she was just RUDE. I mean, making a rotten comment when your granddaughter is feeling down because of what happened to her boyband at a show? Or saying no to having her friends over because you are playing a game? What are you 10?

The art was so so much fun though! I really love Davide Ortu’s style and I was so happy to have a book full of them!

So yeah, this book is sadly going on the bye bye stack. There were good moments and I had fun reading it for quite a bit, but 3 stars just doesn’t cut it to stay, it would need at least 4.5 stars for that. I am still happy I at least had the chance to read the book.