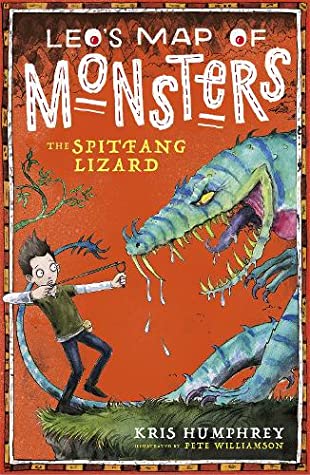 The second book in the series and this time the monster is a Spitfang Lizard! Be warned of their spit and teeth!

I was kind of waiting for maybe one of the libraries adding this one in English… but I am just giving up on that. Haha. It is taking so long. So I finally picked up the Dutch book! Which means that I will be using the Dutch names as I have no clue about the English one. Yes, the MC, but I am also going to use his Dutch name because of the Starla thing. XD

The monster? The Spitfang Lizard (thanks title in English, in Dutch it is Spuugtandhagedis which is pretty much the same). I had an early suspicion on why two left the group. I mean, I have read enough biology book to see where this is going and I was eager for Liam to also discover it and make sure that people know about it. The spitfang lizard was just amazing. I really love the design of the monster but I also love seeing what the monster could do. That spitting was awesome! Wouldn’t want to get glued stuck to something though, not with those teeth.

I also still love that Liam is learning so many things and he is getting better. Though his slingshot skill still very much sucks. XD But I am sure with enough training, maybe some real life situations, he will get there. Plus, I am still so very happy that they are leaving these monsters mostly to be. Even when they are forming a danger they try to lure them away or try to use the stones to calm the monsters down or something else. There are just too many books featuring monster hunting that this one is a relief and a delight. Not all monsters are bad!

Really loved seeing other people! We meet two girls named Eva and her sister Anemoon. I am still a bit unsure about them because of Starla’s warnings + how they acted towards Liam, but I am also very eager and happy and hope that Liam will visit the town these two are from and we get to meet more people living here. See how they survive with monsters around them. I mean, Liam’s town at least got walls. Given everything I don’t think the girls’ town has one.

I am also curious how Liam is going to be keeping the secret about the town/what is outside to his friend. Given that he already suspects something and Liam has to be real careful about things.

But despite the annoying Starla I had tons and tons of fun! New monster! New people! Exciting ending! Friendship! YAS!

2 thoughts on “Review for Leo’s Map of Monsters: The Spitfang Lizard”