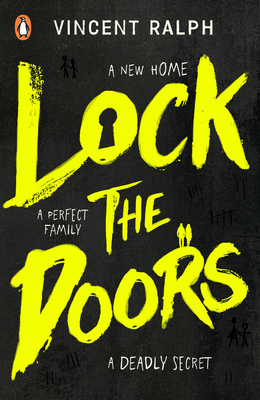 When a boy enters his new house he notices holes on the doors… what is going on? A pretty good book, but it felt just a tad too long for me.

I finally finished the book yesterday (April 5th) after having the book on my shelves for a few months. I just never was in the mood for it, but now I was. I needed to know what was going to happen in this book. I needed to know what the locks were about. I am happy I read the book, however it wasn’t a favourite. There were just some elements that could have been better.

😍 Loved the mystery at first and also at points throughout the book. There were many awesome parts that left me shocked! Like the fact that someone would go to such lengths. Or how they thought they could get away with everything.
😍 Loved the direction it eventually went in, hope that sounds right. Throughout the book, due to the locks, the words, everything, you think that it is probably x or y. Especially when we hear the rumour about Evie. But then it turns around and we get more hints on what actually is going on. Slowly. Bit by bit. Hint by hint. It was still shocking. Still gruesome. Still WTF is wrong with you people. But at least it wasn’t that route.
😍 Amy and Tom were so adorable together! I was happy that they found each other, though it was an awkward relationship, I still was rooting for this duo. Hoping that they would get together.
😍 The cover was also nicely done! I love the yellow letters, how there is a lock in one of the letters, and how there are marks and other things. It gives a clue to what the book holds.
😍 Reading about what happened to Tom in the past. That was well done, shocking and wtf, but I am also happy it was added, because for part it showed why Tom was so obsessed.
😍 Reading about his OCD.
😍 Nia, Tom’s mom, and Jay were such fun characters. I was also so happy for Tom’s mom to finally find a man who doesn’t beat her, hurt her, do other horrible things. Plus, I loved seeing Nia and Tom getting closer as the story continued.
😍 Loved that for most the book is filled with shorter chapters. It made for easier reading and you weren’t stuck too long on one thing.

😐 It is that we as readers get to hear that Tom is really 16, but otherwise I wouldn’t have believed it. If you compare it to other peeps around him who are the same age, or even 1 or 2 years old he just stands out. I felt like he, and also his friend, were more like 13-14. The way he talked/did things. Plus, again, while I understood his obsession with Amy and her secret, it just went too far. Too the point that I just couldn’t believe this was a 16 year old. I have been obsessed with things, I confess, but that was when I was younger.
😐 While I love that we get Amy’s POV eventually… it just felt odd/didn’t work for me. The whole of part 3 (100+ pages) is about Amy and what happened. I think it either should have been shorter… or maybe spread out more. I understand that the biggest catch of the book is the surprise, but then don’t make it too obvious who is talking until later.
😐 The book itself could have been much shorter. At times it just felt so dragged out and at times I wondered if it would ever get to the point of finding out what was going on. I think if we shorten the Amy chapters, remove a few bits and boops here, I think it would have been a much stronger book. Much more exciting. Much more WOW what is happening.
😐 I found it a tad odd that no one really tried to help Tom, or maybe understand his worries a bit more. I mean, if my kid, after all he went through, was concerned about letters on the wall and locks on the door, I would have definitely talked to him more. Maybe found help. Maybe tried to help him in a way so he wouldn’t go too far.

All in all, there were elements I really enjoyed.. but also elements I wasn’t a fan of. Sadly, I cannot rate the book higher than 3 stars. That still means I had fun reading and I am happy I got the book, but also sadly means the book is going on the stack of bye bye books.