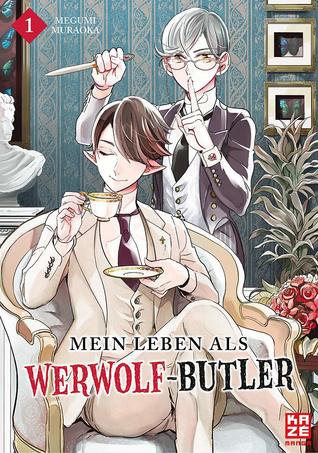 A funny and fun manga about a werewolf butler and his vampire boss… will he be able to murder his boss?

One of the German manga I just had to have! Just based on the title + cover I knew I would love this, and the blurb just completed the deal!

Meet Phil, a werewolf from the country-side. He is determined (spurred on by his mom/grandma) to kill the strongest vampire there is! Why? Because of what passed between the wolves and the vampires. The wolves were slaves/helpers/very low in the chain and the vampires made full use of them. Now that is over, but the wolves have been banished. 😐 Phil sees it as his calling to get rid of the evil vampires. Or well, at least the strongest one! I really liked Phil, and while I don’t agree on murder, I could also see why he felt it was his duty to do this. And throughout the book we see him try on and on again to murder the vampire (or vampires as Eric has people coming by + a little brother in the house). Is he getting it? No. And that is what made it so hilarious. Because each time Phil tries, Eric manages to weasel out of it. Even in his sleep. The ways Eric does that are hilarious. You would think he knows… Mmm. XD I loved that despite it seems impossible, Phil just keeps going. Thinking of new ways.

I have to say that I really love Eric. He is so sweet and kind. You wouldn’t think he is one of those evil vampires. In fact, throughout the book I started liking him more and more. Especially given how much he cares about Phil. Asks about how it goes with him. Makes sure Phil is OK. Even gives him some time off. Praises him (which causes Phil to almost expose himself as wolf). And there is more! Eric is just such a good guy and I am kind of curious if he has a darker side or if he is truly 100% a good guy!

There is Rey, the little brother of Eric… and a handful. Haha. This little guy does all sorts of things. From hiding in harnesses to playing games/tricks. But he is also a sweet guy. I love how he is able to just move around, though I guess forming back to the body naked.. is a bit of a nope side-effect. XD

I love seeing this tiny family get closer. Yes, I would call them a family. Sure, one of them is trying to murder the other, that kind of spoils it, haha, but if you read this book you will see it as well, or well, I hope and not that I am delusional.

There is even another character appearing near the end of the volume… I am not too sure about him. He is a tad annoying. I do hope that he goes back to his country with the next book.

I just loved how Eric and Rey found out about Phil and his wolf-ness. It made me laugh so hard. He was so careful… but his dog-self wasn’t. XD Nature calls~

While I appreciate that grandma/mom had their accents.. I have to be honest and say I just wasn’t able to read most of those. My German reading is fine for most, a tad rusty, but accents? No. At times I was just so confused at what either of them were saying. “Me: Is there a word with so many vowels??” So I just went with the pictures instead of trying to figure out what the heck they were saying.

The art was tons of fun! I love the style. The werewolves were just perfect!

All in al, I need the second, and sadly last, book in the series! I need to know if Phil will get it, or if he will give up and just live a happy life with the vampires. I would hope the last~ I would recommend this one to all~