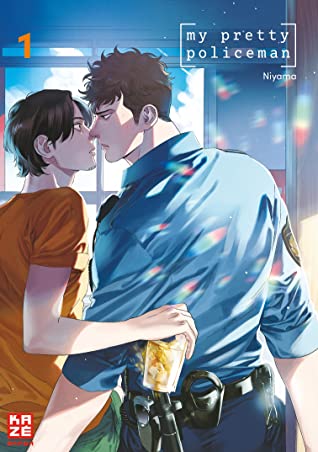 A sexy swoony read about two guys getting together after 10 years!

I was on the hunt for some fun manga and then in German because seriously English manga are very expensive (just to compare one of the manga I got in German was around 6-7 euro… in English that same manga would be 13 euro). I found several including this sexy Yaoi manga that looked SO SO good. I mean, that cover already spoke volumes to me and then there is the blurb. I just needed to get this one!

In this manga we meet Seiji, a guy working at the store but he used to be police officer (until things happened) and Shin is a guy who is police officer. These two have a past! 10 years ago Seiji was there for Shin when he was a younger guy and getting in trouble often. He motivated him to be a cop and also protected him during a fight. I just loved that the author gives us flashbacks to those times. Both from Shin and Seiji’s POV. I loved that Shin got the feels for Seiji, but then waited for him. Yep, 10 years of waiting. And I wonder if they would have gotten together, given this a chance, if Seiji hadn’t said that he was considering dating boys because he has no luck with girls. Haha. I would like to think that yes, yes they would.

I really loved both these guys. They were so fun, sometimes a bit childish/silly, but mostly very mature and I love that Shin gave Seiji that time to think about things. Yes, sure, they did tons of sexy things, but they also talked.

I had such a laugh at the cat of our MC who constantly got in the way when they were hot and bothered. It would just poke its head in the situation and stare at them or just move around them. Kitty was wondering what their owner was up to. Hihi.

Another thing that doesn’t always happen in yaoi… is consent. Well, there is plenty of that in this one! Yes, there is one stolen kiss, but our MC doesn’t mind it that much, even gives the other guy a funny nickname which I just found adorable. But everything else is full consent. I loved that when things weren’t working for their first sex moment they decided to just wait and check out things on the net on how it would work (aka no ripping of butts).

Something I absolutely loved and something that is pretty rare in yaoi manga, is the fact that we didn’t have any funny censoring. I am getting tired of glowing bars, tired of glowing orbs, tired of seeing people just touch a golden bar. In this one? We saw all the deets. From pubic hair to balls. Everything was visible and while I had to get used to it because hello I am so used to that annoying censoring I loved it quite soon. So happy that for once it wasn’t laughable but sexy. Not having to snort because we saw something squirt out of a white blob. XD

The art was also very good and I love the character designs. The sexy scenes were hot and sizzling and I love how the author drew them.

All in all, I NEED NEED the second volume of this hot and sweet manga. I need to know how Seiji and Shin get on and if they are truly going into a relationship now.