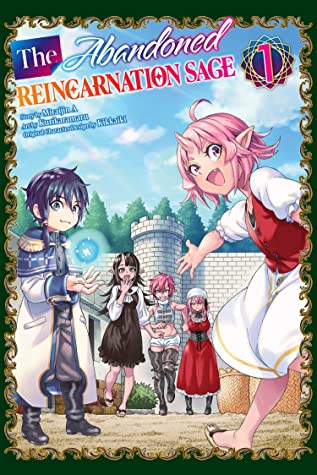 I received this book from Netgalley/Kodansha in exchange of an honest review.

I just love books about reincarnation and this one sounded tons of fun! Goblins, a new life, past memories! Oh yes.

Meet Belamus, as a baby he was abandoned by the humans and the goblins found and took care of him! I just loved that goblins, feared by so many, were this sweet and embraced this human, didn’t care that he wasn’t one of theirs, but they saw he needed help! We then skip to 5 years later and Belamus is now really a part of the tribe. I had a bit of a laugh because due to his memories/due to his hidden knowledge, he knows more than the average human (or goblin) does. The goblins often don’t get what fancy words he is using, but don’t take it against him. Just try to repeat him and then look confused (or in case of his sister try to nom on his head)! I was pretty impressed with Belamus powers though! Given that for most of the first chapter he didn’t seem to have magic or at least just a tiny bit, I mean, that light orb stuff? I thought he was pretty weak. Was I fooled? Yes! Because what follows next was pure epicness and it made me grin. Oh my goodness. If this is just 10%????? Oh no. XD I was hoping that he was staying on the side of good, because we all know how it goes with people with great powers…
I have to say that I liked Belamus… but at times found him a bit too much of a know-it-all. I get it, he is a reincarnated sage, but I would have liked him to just falter a bit at times. He just had a solution for everything and anything. It was just all a bit too easy. Too simple.

The next few chapters were tons of fun (though can someone give these peeps some more clothes, haha). Filled with magic lessons, finding who has potential, helping out the tribe, lots of positivity and I was just so happy for the tribe, for the Orcs and the goblins both. It was so nice of Belamus to help out both tribes and make them one. Try to help them grow and get better, have a healthier life.

I have high hopes that Belamus sister Delarose! I hope that we see her grow more in the next chapters, I feel that she can become quite epic.

I had such a laugh at when the orcs weren’t happy and what the reason was. UM, did you think you could just ask? Haha, I mean, if you want something, Belamus is always eager to help out. XD Also that chapter just turned weirder and weirder with each page. Even Belamus was kinda like What the hell?? XD

The bonus chapter? Soooooo ominous! And now I just want to get volume 2! I need to know!

I really liked the art. It was a great style and it fitted well with the story. The action scenes are epically done (just love it when someone can draw a very detailed, highly epic action scene). Plus, the character designs were fab!

All in all, this is one manga that will stay on my radar. I will be continuing reading it. If you are into fantasy, reincarnation, don’t mind an overpowered MC too much, love good art, then be sure to check this one out.