A warm sunny welcome to the Blog Tour for Reasons Why Not To Date Public Enemy CEO by Melanie Munton!! This book sounds so much fun and perfect for this summer~ I am excited I can be part!

For today’s post I got a ton of fun things! I got an excerpt, a few teasers, a giveaway, and then there is book/author information~ 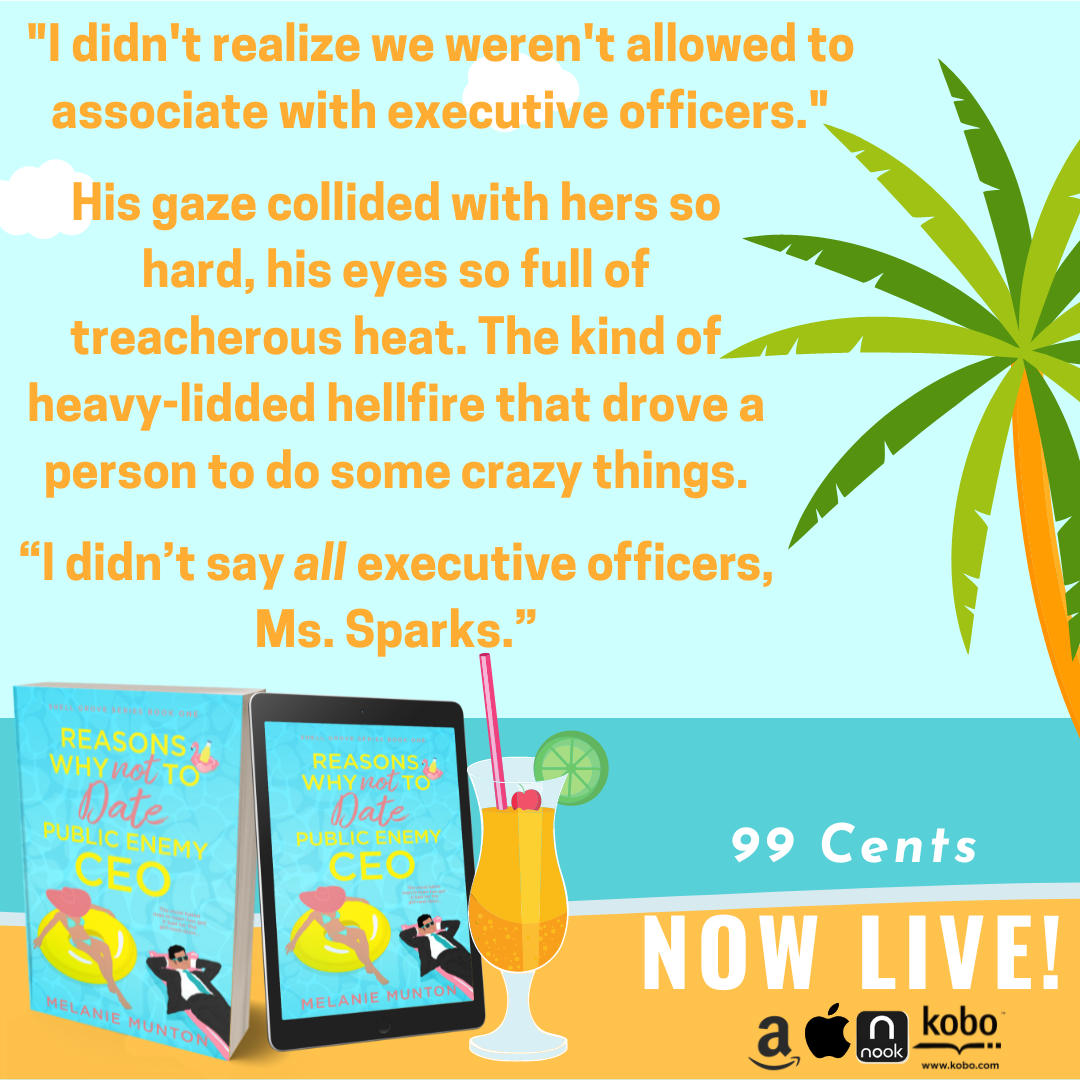 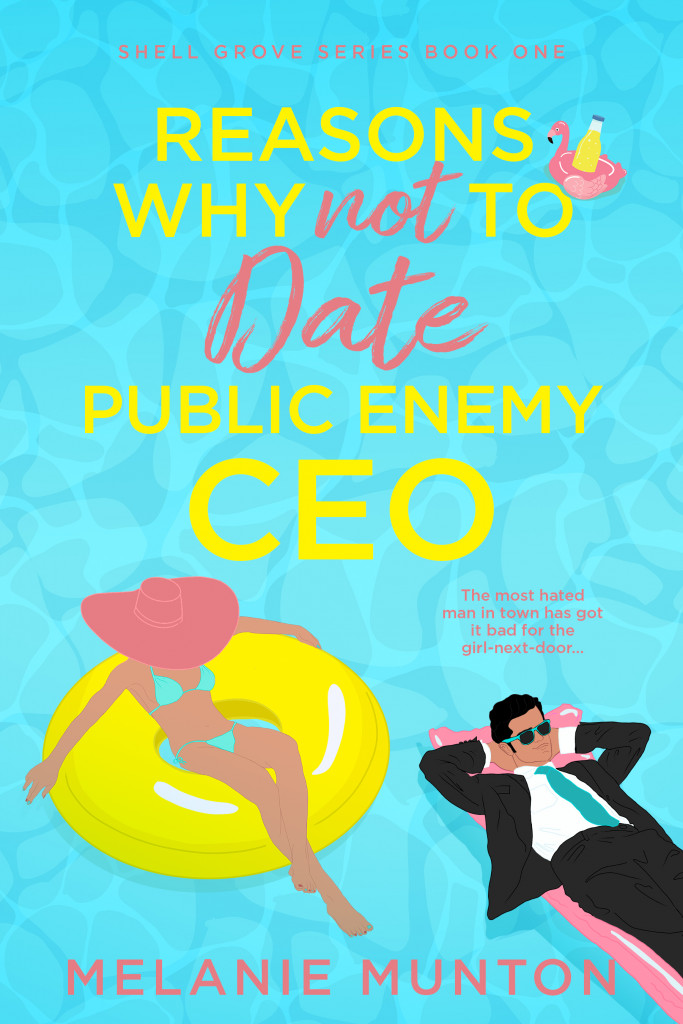 What happens when the most hated man in town goes after everyone’s favorite girl-next-door?

Reason #1: Big, bad CEO Aiden Beaumont wears his grumpy mask every day like a badge of honor. Mia Sparks wants nothing more than to honk his nose or throw a pie in his face, à la The Three Stooges, just to see if he’s capable of smiling. Unfortunately, she can’t. Because he’s technically her boss, and she’d like to keep her gig at the new five-star beach resort for longer than two weeks.

Reason #2: Everyone in her small hometown of Shell Grove, SC hates the man. He brought big business to their little beach town, and as far as her fellow citizens are concerned, that makes him the devil incarnate. But he won’t be staying forever, which works for Mia. She doesn’t go for the flashy city types anyway. She’s quite happy living her quiet life in Shell Grove. The faster the cranky—albeit stupidly hot—CEO is out of her life, the better.

Reason #3: Every time Aiden frowns at her, it hits her like a thousand-watt smile. He has a language all his own, and it’s starting to make way too much sense to her. She can’t avoid him in a town the size of a postage stamp, and it finally hits her that…she doesn’t want to escape him. This always-irritated, too-serious businessman couldn’t possibly be the stable safe haven she’s been looking for. Could he?

Aiden knows there’s a million and one reasons to stay away from the sugary sweet Mia. But who runs away from sunshine after living their entire life in a secluded cave? And when someone from her past unexpectedly emerges and tries to drive a wedge between the two of them? All bets are off. Aiden has never lost a fight in the boardroom, and he’s not about to lose the fight for the woman he wants to deserve. He just has to prove to her that he’s not the PUBLIC ENEMY CEO everyone thinks he is. 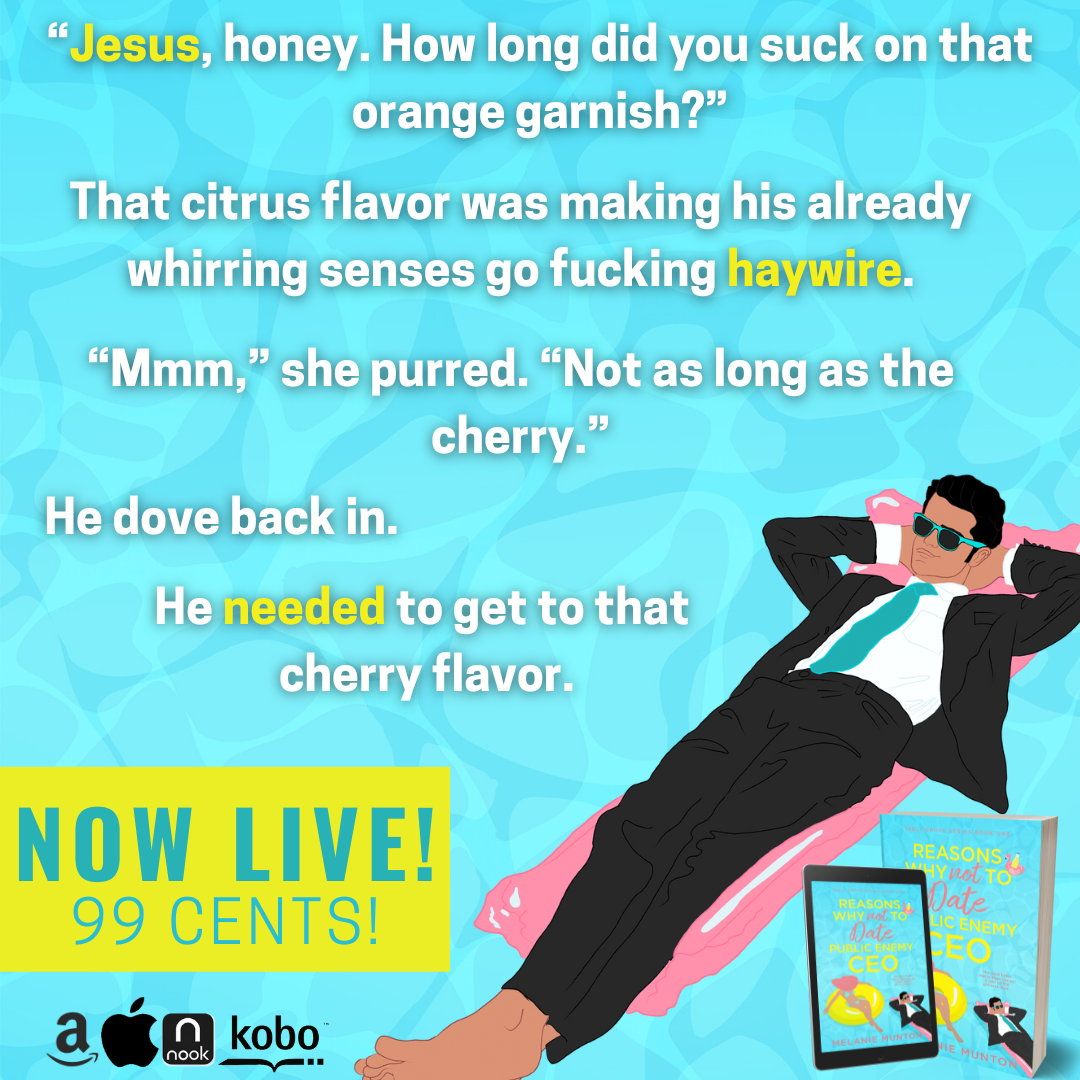 Melanie grew up in the Midwest, but she loves living in the Southeast (where the beaches are!) now with her husband and daughter.
Melanie’s other passion is traveling and seeing the world. With anthropology degrees under their belts, she and her husband have made it their goal in life to see as many archaeological sites around the world as possible.
She has a horrible food addiction to pasta and candy (not together…ew). And she gets sad when her wine rack is empty.
At the end of the day, she is a true romantic at heart. She loves writing the cheesy and corny of romantic comedies, and the sassy and sexy of suspense. She aims to make her readers swoon, laugh out loud, maybe sweat a little, and above all, fall in love.
Go visit Melanie’s website and sign up for her newsletter to stay updated on release dates, teasers, and other details for all of her projects!

Aiden took a moment to breathe in the fresh air of the outdoors, something he really never took the time to do unless he was on a golf course. The fact that this was only his second visit to The Sapphire’s course was a travesty. It had recently been voted one of the top five courses in the entire state. And due to the fact that this area of South Carolina—close to the Georgia border—was practically the mecca of all things golf in the US, that honor was fucking saying something.
It was a stunner of a day. Clear blue skies dotted with puffy white clouds. Mild temperatures with no humidity, something they’d all better savor now because they’d be sweating their asses off in about a month’s time. Summertime in the south was goddamn sweltering.
“Oh, thank God,” Darius said on a heavy exhale. “I was wondering when she’d get here.”
Aiden spared a glance in the same direction as he stepped up to the tee box and took a few practice swings. The cart girl was fast approaching on the path, carrying her cooler of ice-cold beers that, Aiden had to admit, sounded pretty damn good. He shook out his shoulders, gazing down the fairway, as he heard the cart screech to a stop behind him.
“Good afternoon, gentleman. What can I get everyone?”
Aiden’s head whipped around so fast he risked severe whiplash.
Seriously? Was this woman omnipresent or something?
She didn’t notice him right away, not with her back turned toward her cooler as she dug out three beer bottles and capped the lids.
He was barely able to stifle his groan.
She just had to be wearing the official cart girl uniform too. The short, white skort rode up as she bent over slightly, nearly exposing those dimples on the underside of her ass cheeks. And if that didn’t immediately draw his attention, the slender shape of those tanned legs would. The way her calves flexed with her movements, the tiny pulses in her hamstrings as she shifted her weight around. Not to mention, the conforming fabric of the sleeveless blue shirt she wore put every angle of her enticing curves on display. She wasn’t bony, couldn’t even really be called petite. She was fit, with flesh where there should be flesh, and definition that just screamed this girl knows how to take care of herself.
And his three associates were looking in all the wrong damn places.
The same places Aiden was looking, but that wasn’t the fucking point.
He didn’t even know why he cared. Or why irritation nagged at him when Darius started inching closer and closer to her with that smooth swagger Aiden had seen him work on other cart girls and the like. He’d talked to her once. She worked for him. Nothing about this should bother him in the least. Besides, Chuck and Archie were both in their fifties and happily married. But Darius, on the other hand, was a couple of years older than Aiden’s thirty-two, and was an attractive black man who treated the gym like it was his second home.
His gloved hand tightened around his club.
Not your business, Beaumont.
She still hadn’t noticed him as she handed each man his beer—two Michelob Ultras and one Corona. Finally, she turned in his direction with a ready smile. “And what can I get yo—”
Her words cut off as her eyes bulged to the size of inner tubes.
Then she swallowed, which was a problem because it drew his eyeline to the slender column of her throat. A throat that would look fantastic arched back as his hands explored what she was hiding beneath that top, what treasures awaited him under that tight little skort.
“Ms. Sparks.”
“M-Mr. Beaumont,” she sputtered, a little breathless. “Um, hello, sir.”
Fuck sir.
He’d much rather hear her call him by his first name, but professional decorum needed to remain in place. He may have been her boss, but the sir was just too much. For reasons he couldn’t begin to fathom, he wanted to go back to six days ago, when he wasn’t the CEO, but some random guy she’d walloped with a pool skimmer.