A warm welcome to the starry Book Blitz for the newest Kelly Oram book: The Starburst Effect! I am so excited to be part of the blitz!

For today’s post, phew. Well, ready? I got an excerpt, a teaser, a giveaway, and book/author information~ 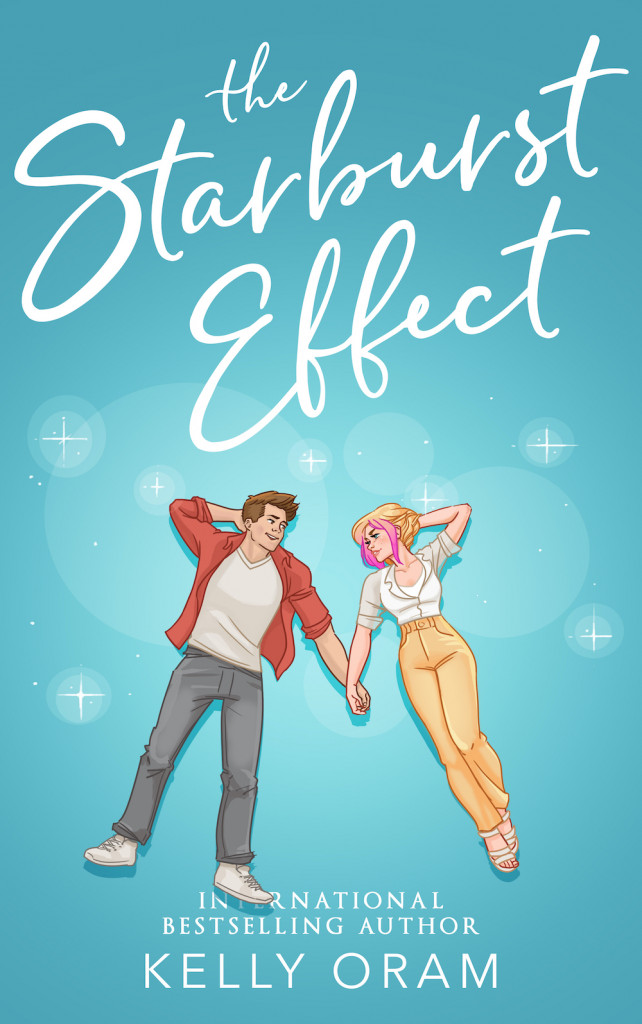 Lily Rosemont lives next door to the biggest jerk in high school. Noah Trask has bullied Lily for years, and now he’s ruined her senior year by making her a target and turning the whole school against her. On top of that, her parents are getting divorced, and her world is falling apart around her.

After an accident on the football field leaves Noah with a traumatic brain injury, shattering his life as he knew it and leaving him with a whole heap of new disabilities, he’s no longer at the top of the high school food chain. In fact, he’s right down at the bottom with Lily.

In a cruel twist of fate, if Noah wants to graduate high school on time, he needs Lily’s help to complete a project—a book he wants to write about his experience. Lily’s not sure she can put aside her anger and hate for the boy who destroyed her senior year, but she desperately needs this project to get a scholarship to college.

It doesn’t take long for Lily to realize that the Noah who got injured is not the same Noah who survived the accident. He’s different. Way different. Slowly, Lily softens to this new Noah, but can she find it in her heart to forgive him? Can the two most unlikely people find friendship in adversity and help each other pick up the pieces of their broken lives?

Kelly Oram wrote her first novel at age fifteen–a fan fiction about her favorite music group, The Backstreet Boys, for which her family and friends still tease her. She’s obsessed with reading, talks way too much, and likes to eat frosting by the spoonful. She lives outside of Phoenix, Arizona with her husband and four children. 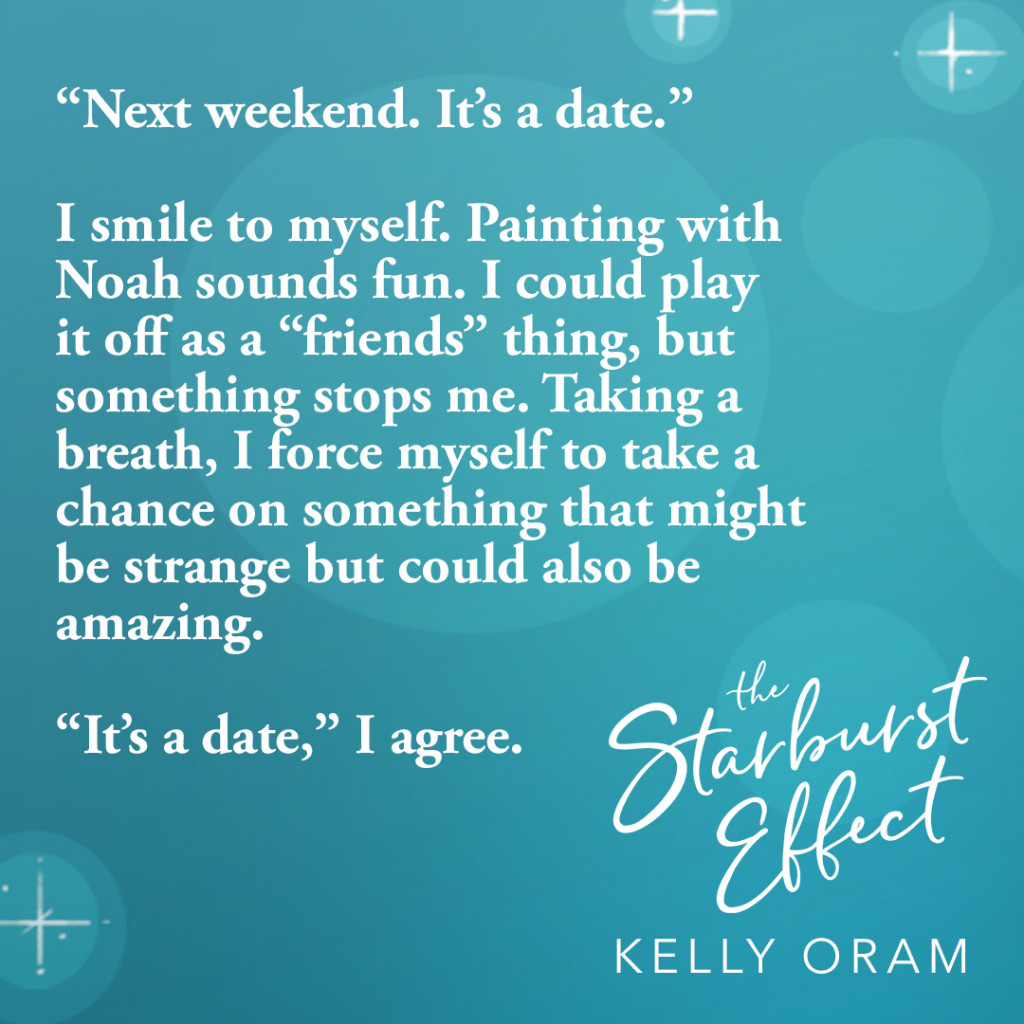 Authors Note: Noah suffers from a Traumatic Brain Injury which effects a lot of his speech abilities. He often mixes up words or can’t get them out correctly. If you see a wrong word in his dialogue, it’s not a typo, I promise. You’ll have to read the book to see how it all comes together!

Mason takes the box from Noah and sets it on the coffee table. “I love Monopoly!”
Noah watches him take out the board and start setting up the game. Slowly, he sits on the floor opposite Mason. I go back to my spot on the couch, prepared to surf YouTube while they do their thing, but when I sit, Noah says, “You’re not going to work?”
His disappointment is obvious, but there’s something more to it than that—a hint of panic. He doesn’t just want me to play. It’s as if he’s desperate for me to join them. It takes me a moment to understand, but then I realize why he didn’t look too excited to play Minecraft with Mason. It wasn’t the game that gave him pause; it was the playing with a nine-year-old that didn’t excite him. I doubt it has anything to do with Mason personally. It probably stems from his mother treating him like a little kid all the time. He probably wants to feel normal by hanging out with someone his own age. In fact, he probably needs the validation that he still can hang out with someone his own age.
It may be Noah Trask, but I can’t say no to the face he’s making. “Fine. But I get to be the dog.”
Noah flashes me another smile. This time, it reaches all the way to his twinkling amber eyes, and it takes my breath away. Man, he’s beautiful. Zoey has always drooled over him, and a part of me has always understood that he’s gorgeous, but I’ve never swooned over him before. I’ve never been able to see past the arrogance or the sneer. But right now, he’s not sneering. He’s smiling like he’s genuinely happy to be here with me.
At a loss for words, and afraid my cheeks are turning pink, I clear my throat and turn my attention to the game. “Mase, you want to be the banker?”
Mason places the Chance and Community Chest cards down in their right spots. “No, you can.”
Mason picks the battleship, like he always does, and Noah goes for the boot. “Why the boot?” I ask.
Noah shrugs. “I like shoes.”
I glance at his feet. He’s wearing a pair of classic black and white Adidas trainers. They’re in great condition, too. I can easily see Noah browsing shoe racks, trying on a million different pairs. For reasons beyond my understanding, the thought makes me smile.
I don’t know why I’m thinking so hard on this. Maybe because it’s the first time I’ve ever learned something personal about him. I mean, I know he likes to play football. Or, at least, he did. I doubt he can still play. But other than that, he’s never been anything more than the jerk that lives next door.
Knowing he likes shoes makes him seem more personable. It’s also something we have in common. “I love shoes, too,” I admit, surprising myself when I open up to him. “I can’t help it. Each pair has so much personality.”
Noah takes the money I hand him and starts separating it into neat stacks. It’s a stark contrast to the messy pile Mason shoved to his side.
“I like when girls wear flip-flops or strappy shoes that show their…their…um…” He points to my feet.
“Toes?” I guess when he can’t get the word out.
He nods, relieved that I guessed right. “Girls’ toes are cute. I like when they’re painted.”
I look down at my bare feet with teal painted toenails. Noah reaches over and pulls on my big toe. “Your sister has cute fingers,” he says to Mason.
My mouth drops open, and Noah grins at me. Who even is this guy?
Mason looks horrified by the confession. If I weren’t so flustered, I’d laugh. “That’s weird,” he says, sounding like he thinks Noah is out of his mind.
Noah smirks at him. “You still think girls are ew, right?”
Mason wrinkles his nose. “Huh?”
It takes Noah a minute to respond. You can see the wheels working overtime in his head. “You know. Like they have cooties?”
“Oh.” Mason’s cheeks turn pink. “Girls aren’t gross, but it’s weird to like their toes.”
Noah chuckles. The low rumble rolls over me in a way that makes me shiver. I take a deep breath and snatch up the dice before Noah notices he’s affecting me. “Okay, someone roll to see who goes first.”