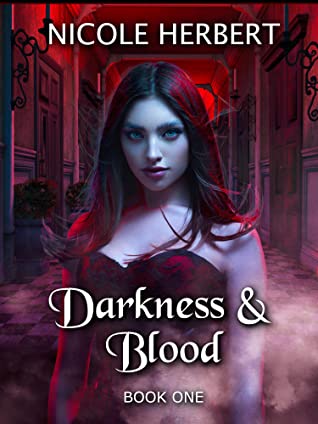 When I got the request from the author I was immediately intrigued by the book. Vampires? Scary stuff? Sexy vampires? Also that cover? Yes, I would love to give this one a shot. And boy, I am happy I did because I had oodles of fun reading it. And I am also doing a shout-out to my shiny new glasses that I got just a few days before reading this book, because without it I may have taken much longer. XD

In this book we meet Hannah and Danielle. Two girls who go to college/university and have a great time partying, studying, and being friends. One day though they meet two people who are very attractive, but are these people good guys? I just loved how we immediately saw that something was very very very much wrong. I mean, puking up blood? No memories of the last evening? No idea if you had sexy times with a sexy girl (or in Danielle’s case boy)? Oh and that sun OUCH OUCH AND OUCH. I would definitely be very wary. I did think it was a bit silly that they never went to the hospital, boo, if I spat out blood like that in those amounts I would be to the hospital in a heartbeat. XD But maybe that is part of the memory-wipe that happens or the attraction that both these girls felt for this duo. Either way, I knew something was up and I was curious to see how long it would take before Danielle and Hannah would get the truth. And what they would do next. Because turning into vampires? Not your daily thing and I can imagine that you may want to put in your own two cents about it.

I think it was fun to learn more about vampires (some old and some new things), even the politics weren’t too politic-y (if that is the word) and I was actually interested, meet other vampires (good/bad),  see how Hannah is trying to get by and figure out if she is going to die… or become human again. And what she wants as well. I mean, does she want to be a vampire? Or does she want something else? Throughout the book we see her struggle between those two sides. We see her attracted to the vampire side, but also lean very heavily to being a human. Eating normal food. Going outside. Having a life and not one in the shades and darkness. It was really nicely written.

And yes, Hannah makes some dumb decisions, but I guess I could also understand where she was coming from. Still, I was shaking my head at the things she did and how many warnings she decide to throw away. Haha. Oh, I shouldn’t go to a trial full of vampires? Let’s go! Oh, I should stay away from x and y, LET’S GO. I was like, Hannah, Hannah, NO. Don’t. Haha. Still she was a good MC and I did have fun seeing her make sense of things, see her go her own way.

There is a dash of romance. Of course, Terry and Danielle for a bit. But I would also say that Lillian and Hannah had a certain attraction to each other. I know, vampires do magical things, but I don’t know, there was something more, at least in my eyes. And for the first part of the book I was there for it. I just loved how much chemistry these two had. However, when we learn about certain unsavoury things from Lillian… I was just hoping that Hannah was able to find someone else. Well, say hello to sexy Albert. It takes a while, almost to the last part of the book, but we do get some romance and I loved these two together, they really were a match and I hoped that they were able to make this work out. Somehow.

The ending? And what was mentioned there? OH MY GOODNESS. I thought this would be a vampire-only book, but we also get those? OK, I am in! I wonder if Hannah had known about THAT if she would have fallen for Lillian that easy. Mm. Curious.

Oh, and it wasn’t until a bit later that the prologue just clicked in my head and I went OMG OMG about it. XD

All in all, this is one book that I really enjoyed and that I would recommend. It had some scary moments (that kidnapping), some OMG, no girl don’t do that moments, some sexy moments (shipping Albert and Hannah so much), and in overall it was one hell of a ride and I cannot wait for book 2!