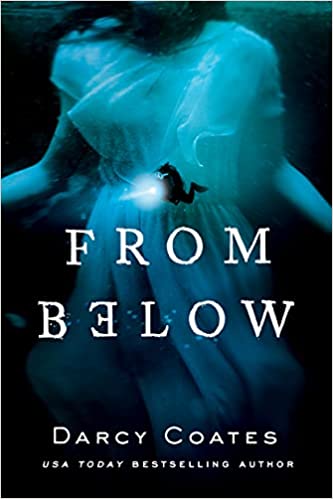 My second Darcy Coates book I was approved for on Netgalley and I just had to read it! I was in the mood for something dark. Spooky. Gruesome. And while the book was scary and scared me to not sleeping for a night…. it was also sadly lacking and I struggled to get through it. I kept looking at the percentage of my Kindle to see how far I was.. and each time I was like, but wait it feels like 10% how is this just 2%???

This will be an emoji review~!

😍 LOVED that we got two timelines. The one in which we see the ship still sailing/going and all that happened aboard. From just mere fog and strange stuff to tapping in the walls to things crawling around to people just dropping themselves of high places to well… there is more and it isn’t good. It was so creepy and I loved how we got, through this, some answers. Though I am still confused. Haha. It also clearly showed what people would do when things would go scary/harrowing and there is no way out. There are people who are doing OK-ish… but there are also people who just go craycray.
And then in the now we follow our divers as they discover and explore the Arcadia. Underwater. Finding an entry point. Figuring out what in the hells name happened here. Seeing flashes of something just outside the corners of their eyes. See how the shipped had looked, and see how it deteriorated with the years. Read the messages. See the holes. And know that something is very fucked up about this.
😍 Roy was such a character. Yes, he was a bit of a dick and at times he was just insensitive, but in the darkness of everything he did bring some light-hearted moments. And he did some amazing things when things got harrowing. Yes, he was scared shitless, but he did his best to help his team.
😍 The claustrophobia of it all. You are in a ship, 300 feet under water, there is no easy ways out, limited oxygen, tons of scary crap slowly starting to happen. At times I was just gasping for breath because it got so tight, so is there going to be a way out?
😍 Of course I knew, thanks to the blurb, that the Arcadia was bad. But I could have told you that from the moment that they saw the ship on the bottom of the sea/lake that it was a bad place. That it was one to avoid. It just didn’t vibe right.
😍 The dead bodies. GOD. There were already some twitches here and there in the beginning, but as the story continues there is more and more that you are like: Wait… did I just read that right? Did that eye blink? Did that leg twitch? It really added to the claustrophobia. You have to get out because the air is running out… but then there are dead bodies who would love to add you to their dead family. Lovely right?
😍 The cover! I just adore it!
😍 I was really happy that we got the POV of not just Cove, but also others in the team (and in the past parts we got 2 of the crew). Hestie’s was, next to Cove’s, a favourite of mine. I just loved this girl. She was sweet, smart, and while she was scared out of her wits she stayed strong and even tried to lead and do bigger things.
😍 The burrowing disease. Fuck me, but that just terrified me. When the divers first saw holes I was like, eh, maybe people just tried to dig out even if that is a bad idea/just weird, but then we learn more on the holes and I was like FUCK those holes and just avoid at all costs. NOPE NOPE NOPE.
😍 The eyes that shimmer in the darkness. Just flashes here and there.

😶 How American it all just was. I mean, seriously. I get that there is a quota to be met, but you would think that they would at least give you some money if you can at least get some footage, but apparently one just has to push through and almost die because otherwise no payment.

😑 I would have liked to get more deets on Vanna from the start. Even a hint would have been nice. It isn’t until the end that we get a Vanna POV and learn of the answers. By then though? I didn’t really care anymore. I was like, nothing happened, so it is probably all good and dandy.
😑 Sean was such a dick. I mean, excuse me, wtf is wrong with you that you are searching through people’s stuff. Yes, I get that you are frustrated and that you want to get to the bottom of things, but entering someone’s room? Reading stuff? Opening lockers? Nope. And even later he constantly tried to override Cove’s authority. I just wanted to yeet the guy over the ship’s railing a few times.
😑 I have always been so interested in diving.. but dang, no thank you for now. I mean, it just wasn’t exciting to read about decompression this and decompression that or how there were all these terms for stuff.
😑 I am still not sure what is going on with the ship? I mean we get all the puzzle pieces but then things are contradicted again or said that something else also could be the cause and I just don’t know anymore. I mean, the dead bodies clearly were real, but what was in the walls? Did the ship resurrect the workers who died in there or something?
😑😒 It just seemed to drag on and on. I recently read Gallows Hill which is a nice 480 pages whereas this one is 352. However if I had to answer which one felt the longest? I would go for the 352 pages one. The 480 one? I flew through that one. Yes, there were some pacing issues, but nothing that made it seem like I was just being dragged along. This book, even in the scariest moments.. I just felt bored. Yes, terrified, but also bored. There were multiple parts that could have been written just a bit better, less repetition, less dialogue more action. It just felt like something was missing. It just felt so stretched out.

😬Aidan. I am sorry boy, but dang, I just wanted to punch that kid. For multiple reasons but all for endangering the mission. Not being honest about his supply of oxygen times 2, to the point that he barely made it to the surface. Listening to some old man and endangering himself and Vanna and then of course the rest as well. Not being honest about his credentials. How no one noticed he was constantly panicking was magical to me. LORD, that kid was just constantly panicking. But the real kicker why I wanted to punch Aidan was near the end. And I will put this one under spoiler tags.

So yeah, not a big hit for me, such a shame as it sounded like I would really enjoy it! I just love horror about claustrophobic places. That you cannot escape from easily. That they will get you. But it was just too slow, the pacing could be better, and Aidan just needs to be punched and Sean yeeted of the ship. Oh well, here is hoping the next books by Darcy Coates, who is still one of my favourite horror writers, is better!