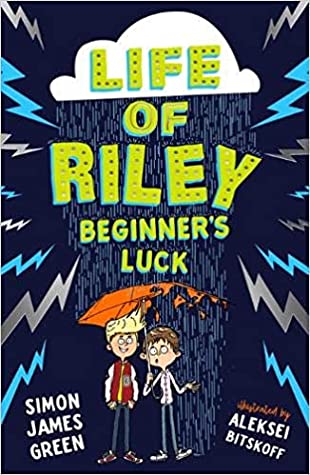 What happens when you get cursed by bad luck? Well… a lot of chaos and tons of humour!

After reading Simon James Green’s The Sleepover Takeover I just had to check out his backlist and see what else was on there! I found out that I got plenty to read! I decided to buy this book + one of his picture books! This one was first and I loved reading it, it was just oodles of fun and I laughed a lot, because dang that is just not some bad luck but extra-ordinary bad luck.

I will write my review as a AWESOME and mmm unsure one.

😍 The cover is just so fitting for the story. How Brad’s side is all fine and Riley is getting all the rain and having no umbrella.
😍 How one sneeze can curse someone, I just had a laugh and I guess I should stay away from fortune tellers if they are this easily angry. Because I have some serious hayfever and my body also loves getting colds and such. Don’t want to sneeze and break something.
😍 Seeing the curse take effect. From small things to big things. Yes, I felt sorry for Riley that he had to go through all of this… but I was also laughing because it was just so over the top. That glue accident for instance just had me in total stitches.
😍 Riley trying to find a cure for the curse which ranges from throwing in all the herbs (and more) in a bathttub to asking his mum for a credit card to finding that fortune teller. He is going for it and I was rooting for him.
😍 The illustrations were fantastic. Really fitted with the book and I am becoming a big big fan of the illustrator!
😍 Brad! At first I thought he was something of an alien, but I am glad he is just normal human. With his own issues. I love how he stuck close to Riley and helped him out when needed. I loved seeing their friendship get bigger and bigger. I am guessing you want to know why I thought he was an alien? Yeah, I guess that is a bit weird. But with how he talked and acted and how he, despite everyone avoiding Riley, immediately went for Riley.. it was just all very sus.
😍 That beach scene? I was just laughing so so hard and even read it aloud to my husband when he got home again. And then we both laughed some more.
😍 Riley was such a fun character, plenty of flaws (like acting like a very young child when the situation got out of hand) but also tons of fabulousness. I love that he is part of the theatre and would have loved to see more of that. He just makes the best of the situation no matter what.
😍 The time when that fire prevention presentation came around and boy, that firefighter really regrets picking Brad and Riley. XD
😍 The ending. Haha, I didn’t expect it to go that way and I love that the author decided to go for that. Good luck boys!

😶 I just wish that Riley had been more honest towards Brad! In many aspects. Early on, but also later when Riley finds out how lucky he is with Brad around. I just wish he had told Brad. Explained it. Now we get some, yes I would call it that, dumb drama that reminded me of romance novels. Everything is going fine and then boom, suddenly dramarama. rolls eyes
😶 How everyone was easily to dismiss Riley’s bad luck. He just felt so down in the dumps and he was trying to get things solved and everyone just acted like he should just turn around the luck to good. Hello? It is quite obvious that this isn’t just any bad luck… this is a curse. Bad luck is falling over something on the road, or breaking something, or losing with a bet. Bad luck isn’t injuring people, or having things explode, or bad things happening just because you are there. Sure, there were some smaller bad lucks happening to Riley that I am not sure is the curse or not (like yelling on the beach about a dog called Shark), but other than that, the rest is not normal. And I just wish that people were a bit more understanding.

All in all, I read this book in a flash, it was just too funny and I couldn’t stop reading! I really had fun and I would highly recommend this book to all.