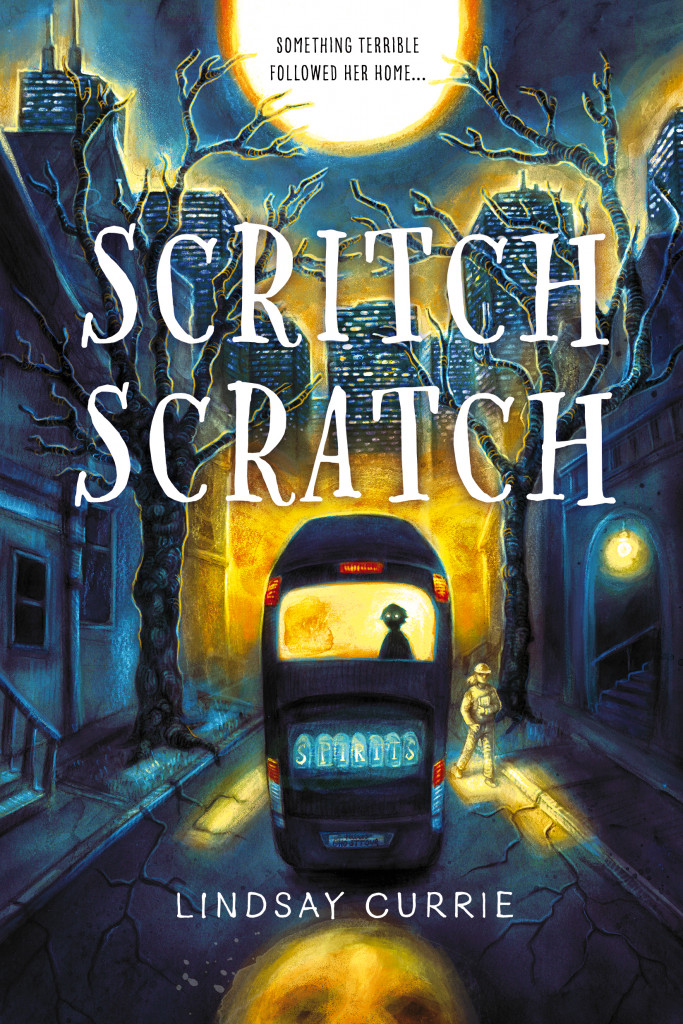 A spooky ghost story that was very well-written and I so so enjoyed it!

After reading the amazing What Lives in the Woods I decided on checking out the one spooky book by Lindsay Currie (MG/Children at least) that I still had left: Scritch Scratch! Now I read all three books and now I can wait “patiently” for the fourth spooky book to appear.

Since I have been trying for a while, read the book April 20th and by the time I am writing this it is May 6th, to find the words to write a review. I decided that the best way now was to make a fun list of all the things I enjoyed. Because I didn’t really have anything that I wasn’t a fan of.

😍Love that it takes place in Chicago. I have heard a lot about this city and wish I could visit. Not going to happen, but at least there are books! I loved reading about several scary legends and ghost stories that happened in the history of this city. As the kids appropriately said, it wasn’t just the city of wind. It was also the city of fire. And ghosts. I loved going on the tour with our MC and her dad and other ghost lovers and see several sights. And later on the kids themselves go on a trip and I just wanted to pop into the story to check these sights out as well.
😍 The brother! High points to him. I was worried when he first appeared that he would be our standard brother. Mean, bullying, making fun of his sister is top priority. But then he showed another side and I just adored him. I loved how protective he was of his sister and how he tried helping her out. Not just with the ghosts mind you, but also with something else.
😍 The boy from the bus? OH MAN, he was just so scary! Scratching in the walls, water appearing, scary eyes watching, and more. Our MC even had to dive into her closet to make sure she could sleep or at least feel safe. He really did some scary things that made me wonder if he was really that kind, if he really wanted help? Or if he just wanted to ruin lives. I was heartbroken as we learned more about him and who he really was. I did think it was a bit weird that Claire forgot that big detail, that he was all dripping and wet when she saw him in the bus. I mean, that is a big clue and that is why at points I knew more than Claire and her friends/brother.
😍 The mystery about the boy, it was great that Claire/her friends/brother went out to figure out what was going on. To give the ghost his name. To make sure people wouldn’t forget him.
😍 The cover! So terrifying and so fitting with the book.
😍 The parents were pretty nice, I loved how they listened when their kids needed some help/could use some parental love and also gave some advice. Though I did think it was a bit weird that they asked Claire to go on the spooky tour to help her dad when they know how terrified she is of scary stories. It just stood out for me.
😍 I loved that it wasn’t just about ghosts and scary stuff, but that we also get some mental health stuff (Claire counts when things get too much for her) and friendship (I could imagine that she was worried when a new friend appears and her friend seemed to spend a lot of time with her). I loved how both of these things were integrated in the story and how they were a big part while not taking over the spookiness/ghost story.
😍 Warner. Aka the love interest! I really liked the guy! He could have gone the stereotypical jock way, but he stayed nice and kind throughout the story and it was clear that Claire’s interest in him wasn’t one-sided quite early on. I found myself rooting for these two to figure things out.
😍 The ending was terrific! So proud of our crew, so proud of Claire for all she did and what she will be doing in the future.
😍 Can we have dad’s books? Please? I would love to read those!

All in all, this is one book I would HIGHLY recommend to all! Be sure to check this one out, but also Lindsay Currie’s other MG spooky books.