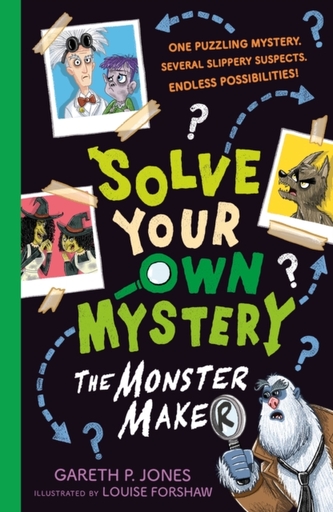 A fun Choose Your Own Adventure, this time with monsters and missing machinery. Will you find the suspect? What ending will you find?

In this book a party ends up with a machine missing. Mr. Franklefink’s precious Monster Maker has disappeared… but who can have stolen it? Was it the vampires? Was it one of the kids at the party? Was it the witches? Everyone is suspect and I love it! Haventry (the town we are in now) is such an interesting place and I would love to just dive into the book and check it out. See all the things that happen there, meet up with monsters. Ah! Let me in~

At times I got serious Murderville vibes. It was that the Yeti was competent otherwise it would have been a full 100% feels. For now a bit around 50%. Haha. We get hired to be an assistant and it is mostly up to us to do things and find things.

So far I only have found one route. But no worries, I will be reading the rest of the possible routes as well! In fact, planning on doing that today (March 29). I am excited to see what the other routes will bring and if they will all end at the town hall or if there are also other settings! I am excited for it! I did like the route I found at the moment and how we start off suspecting one or two people and then the story unfolds and you keep getting more and more suspects. Eventually, before the ending, I was able to narrow it down to around 3 suspects. In the end my suspect wasn’t there, but I had the kind of monster right, haha. XD The author did a really good job at making everyone suspect. Everyone had an motive and otherwise they would get it if the story went on. It was just so much fun and it made it more mysterious and puzzling and I love it! I am curious if the other endings have other suspects/other people who have done it. I would hope so!

Though I am not looking forward to going to the Zombie Clown route. I mean, F clowns. I don’t like those. Yep, this girl is terrified of clowns (well with the exception of Pipo and Bassie XD). But I have to go that route as well. shivers

I am already delighted that there aren’t many more routes and that it was fairly easy to follow. I have read a few Choose Your Own Adventure books and I can remember one that had 30+ endings. Which wasn’t fun. I am all for fun routes along with bad endings, but keep it at max 10 because otherwise I will just be confused. Haha.

I also like the What If at the end, that chapter was a nice touch! Along with a way to start over from certain points… well if you want to, because do you want to change the ending?

The art was also fantastic, I really love Louise Forshaw’s style of drawing it fitted well with the book~

All in all, this was tons of fun! And I cannot wait to get the next book in the series~ I would recommend this book to all!