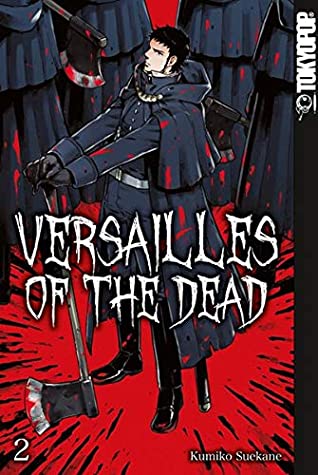 The second volume and more twists and turns, lots of gore and zombies, and many OMG moments!

Whereas the first volume was all about Marie Antoinette, or well at least 90% of it, this volume is all about Gerard, a knight/guard of the royal family along with a bit of a view of one of the families targeted. I was quite surprised by that, but I did love it. It showed us another side to the battle against zombies, showed us some more on how these zombies are created, and there are many other twists. And Marie Antoinette does get a bit of a spotlight in the later chapters.

The first chapters are about Gerard, a guy from the knights/guards. We follow as he is trying to kill zombies, save people, protect royalty, and figure out who the hell is stealing jewels and such. Is it using zombies as a way to get certain things? My heart broke in that first and second chapter though as we also follow a boy named Emilio and a girl named Carine. She is rich, he is poor. They are sort of friends at least that is the way it seems even if he is apparently also her servant of some sorts. I don’t want to say too much, but I can tell you that I was just crying.

Those chapters with Marie Antoinette, holy crap, I didn’t think the manga would go that way. I thought this was just going to be a scary manga about zombies, but then the mangaka threw that kind of being in there and what happens next… I was just shocked OK. I was totally taken by surprise. It does fit MA though, very much so. They often comes across as supersweet and caring.. but we have seen their darkness. And they are apparently even willing to go that far. Yeah, I am keeping it vague. At least I try to. XD

I really like that Joan of Arc is mentioned, though I am quite worried about it as well. Haha, given this world… is she a zombie or something else entirely?

I also loved seeing some villains? I am guessing at least, given things, but I guess we will be seeing more of them later in the stories. I do love their names, haha, I should keep a checklist of those important French names and see if they are getting added!

The art is still very much awesome + the zombies are just so scary. It is as if they will just pop out of the manga pages.

All in all, sorry for the vague review but you really need to read this series. I don’t want to give too much away! And I will be getting the next volume when I can!