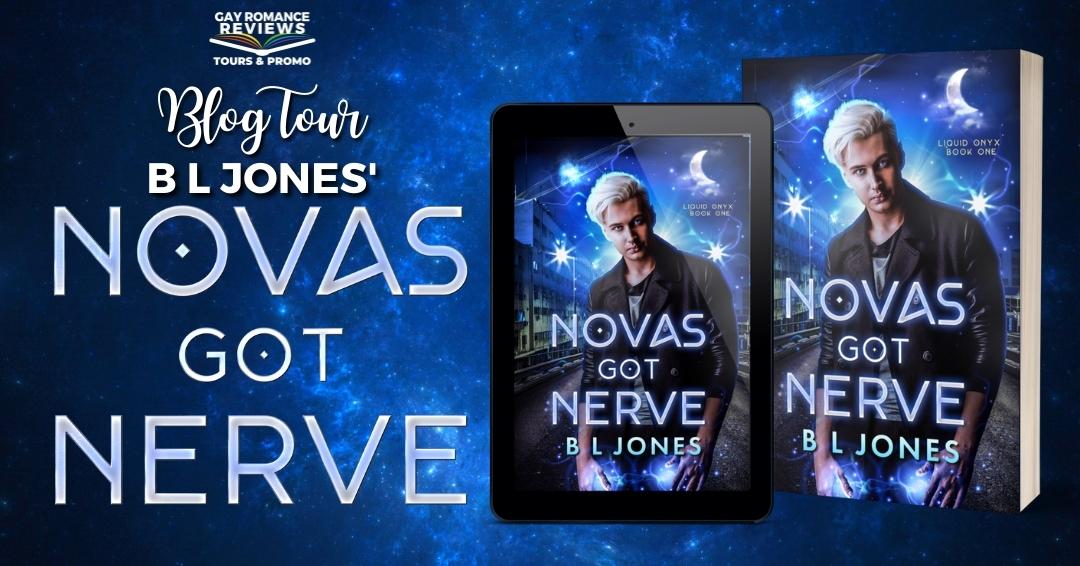 Welcome welcome a big WELCOME to the Blog Tour for Novas Got Nerve by B.L. Jones! Eep! I am so happy I can be part of the tour because this book sounds awesome! LGBT, superhuman, murderous mages, heroes and more! I so need this one.

For today’s post I got a lot of fun things, excerpt, teasers, and of course book/author information!

Ready? Let’s get this tour started!! 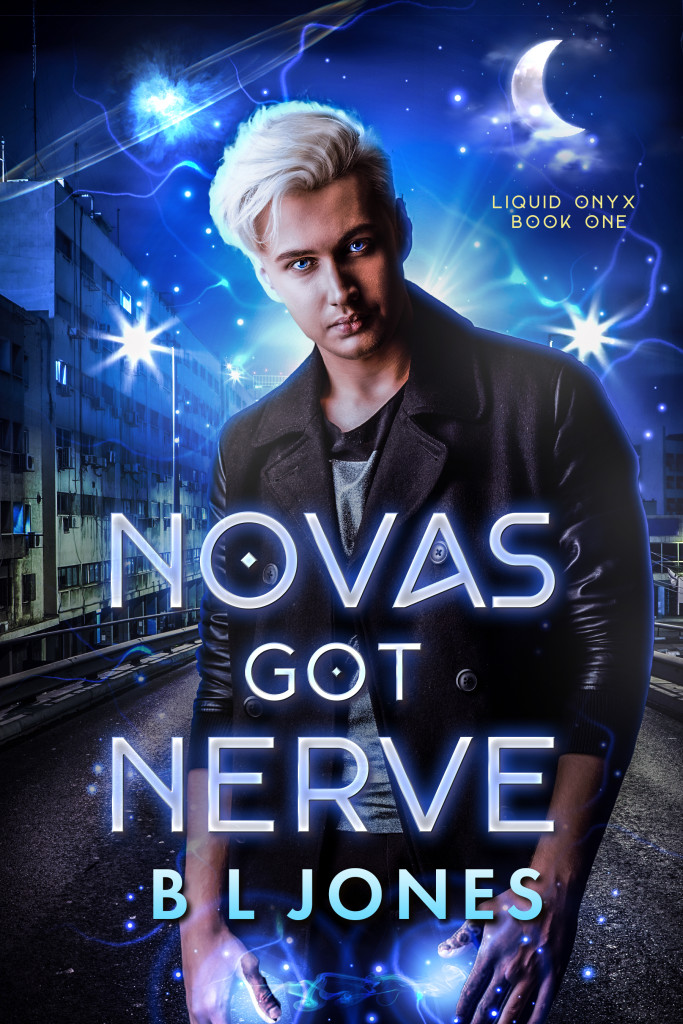 He’s got far too much nerve. He can blow things up with his mind. Yeah. The world should probably brace itself for this one.
When Rex Nova was four years old, he became one of the world’s first superhumans.
When Rex turns twenty, he feels the drive to use his scientifically given abilities to protect the world. He leaves home to become a member of the Secret Superhero Security team, alongside three of his friends and Danger City’s own superhero, Polaris.
Rex fights murderous Mages, evil organisations, criminal mafias, his agency appointed psychiatrist, his own weird brain, and the most frightening of all, his attraction to a certain blue-eyed superhero. 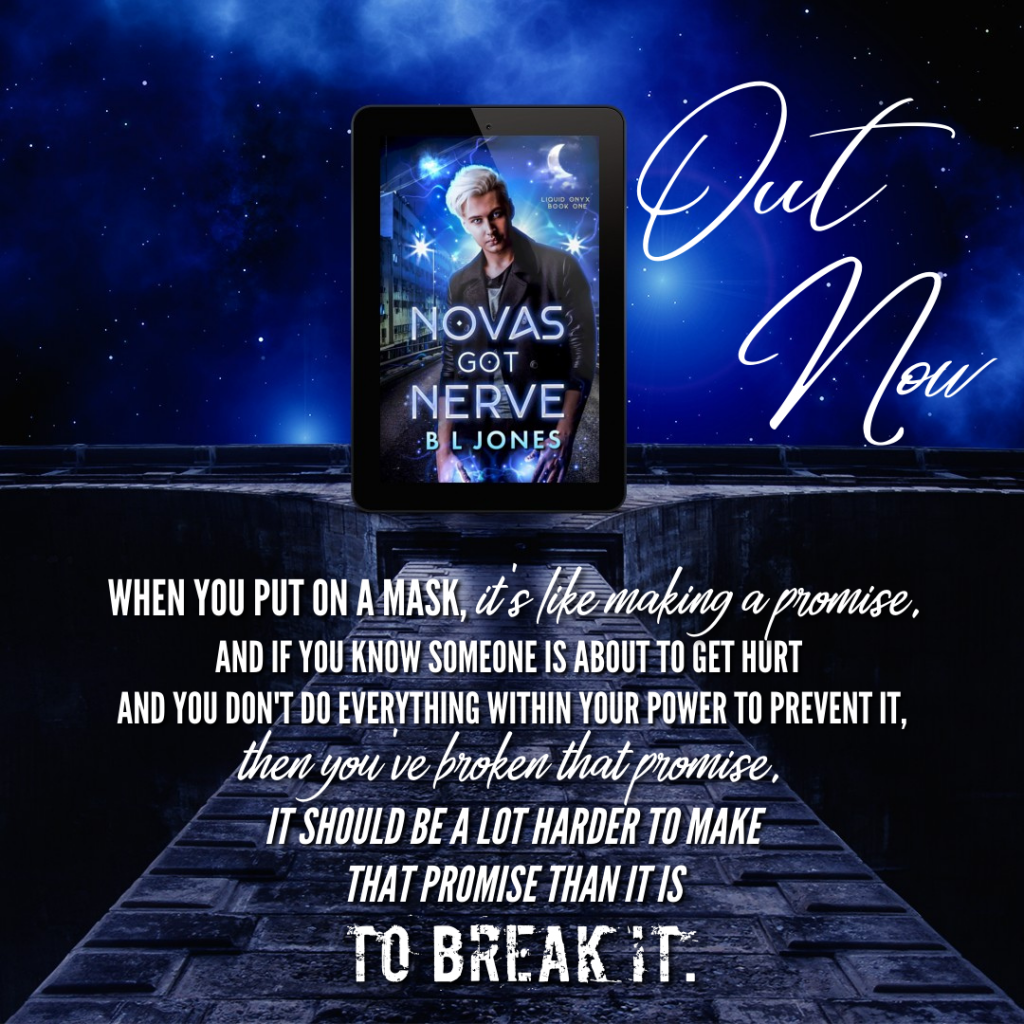 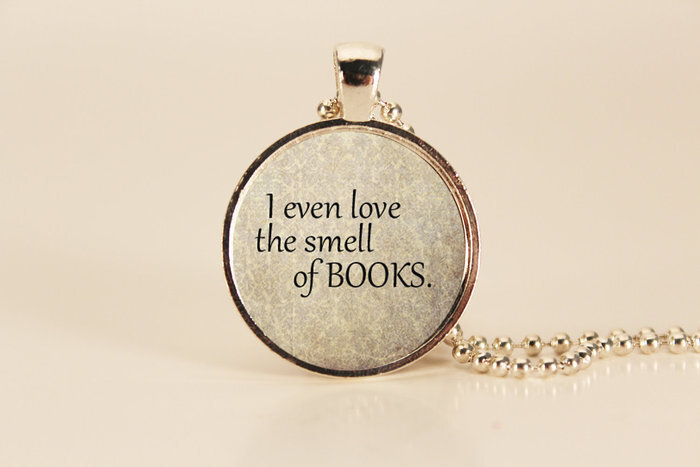 BL Jones is a twentysomething British author who spends all her free time reading and writing and taming her three younger brothers. She lives in Bristol with a temperamental bunny named Pepsi. She’s been writing stories since she was five, rarely sharing them with anyone except her numerous stuffed animals. BL has had a difficult journey into discovering and accepting her own queerness, and therefore believes that positive, honest, and authentic stories about queer people are very important. She hopes to contribute her own stories for people to have fun with and enjoy. 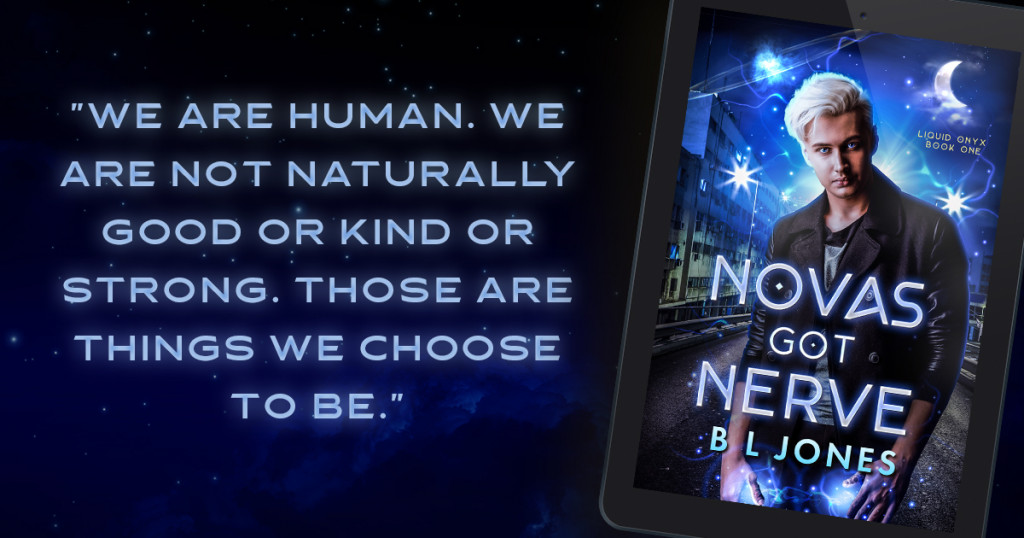 This Is It. This Is Our Hero
RIGHT THEN. LET’S kick this off with some hardcore exposition and a whole lot of bizarre shit.
My name is Rexley Xander Nova.
Yeah. I know. Just. It’s a weird name. I have a weird name. I have weird friends. I have a weird family. I have a weird existence. No lie, this is pretty much how things are gonna be all the time going forward. So. For the sake of full disclosure. Beware.
Fun fact number two, I live in a little seaside town named Colbie.
Colbie is small, like barely there tiny. We have one school, one church, one town hall, one strip of shops, and one park. The rest of Colbie is cottages and beach. It’s the kind of place you get lost in because Google Maps has it out for you, not somewhere you’d go on purpose. The most memorable thing about Colbie is probably the town’s residents. You’ll understand what I mean by that later.
Fun fact number three, a lot of people are raised by the subspecies known as parents. I ain’t got those. I do, however, have a Roux and a Lady Mars.
Roux is my uncle, and, I gotta be honest with you, he’s one of the strangest men alive. He’s also very annoying. Prepare yourselves. Mentally. Emotionally. Possibly
physically if you’re one of life’s throwers. Like, if you tend to throw things when you’re frustrated. Or afraid. Or hungry. I don’t know. Emotions are hard. And yeah, I hear you, “hungry” isn’t an emotion. But. I can’t be alone in thinking it really should be.
Maybe part of you is worried this is gonna be the start of me whinging about my bothersome parental figure. I get why you’d think that. I’m twenty and a person and, regardless of age, I think it’s just how we do sometimes. But nope. That is not it, I swear. You haven’t met him yet. And now I feel bad for you. Because if you keep going with this whole thing then you will have to meet him. So. I mean. Good luck with all of that noise, you masochists.
The other half of my parental unit is Lady Mars. She and I aren’t family in the traditional, biological sense. But we are family in all the other ways that matter.
If I tried to really, properly, describe the pure personification of epic that is Lady Mars to you, then we would probably be here forever. So, I’m gonna knock it down to the basics for now.
Lady Mars is the local “eccentric” woman who lives in the scary looking cottage and who everyone secretly thinks is a witch. The town hag if you will. Those are her words by the way, not mine. The old hag part I mean. Lady Mars isn’t old or a hag. She is a witch though. Or at least, she comes from a family with magic in their blood.
Magic runs in bloodlines, and most magical families call themselves Mages.
The existence of Mages is a secret. Not a lot of people know magic is a real thing, which is probably just as well.
Roux isn’t fond of magic. He says people cause enough of their own problems without throwing something as unstable as magic into the mix.