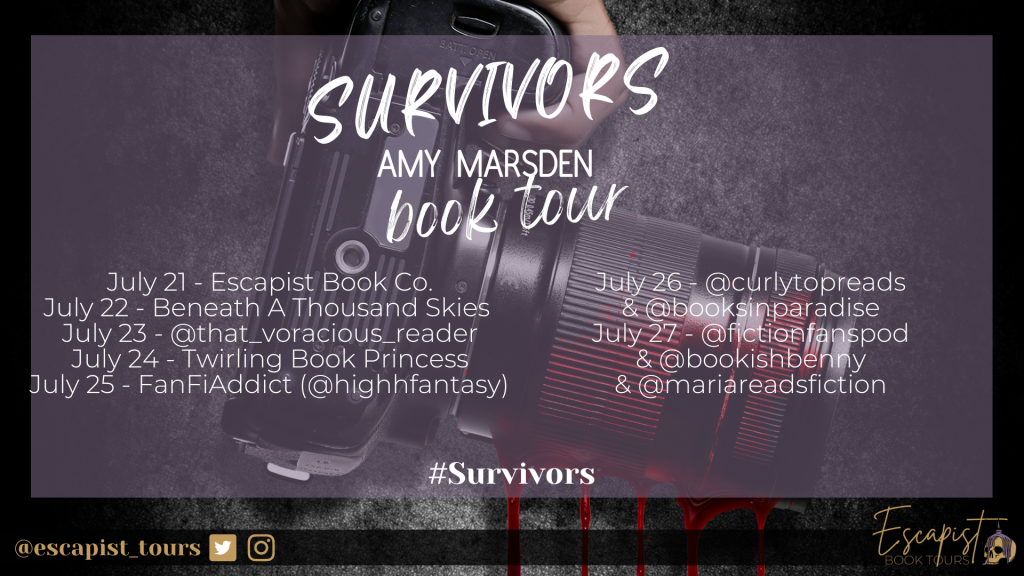 A zombie-tastic welcome to the Blog Tour for Survivors by Amy Marsden! Squee! I am so happy I could be part of this tour, my very first Escapist Tours tour! Zombies, scary stuff, but also a great character who is bi.

For today’s post I got a 3.5 – 4 starred review, a giveaway, and book/author information! 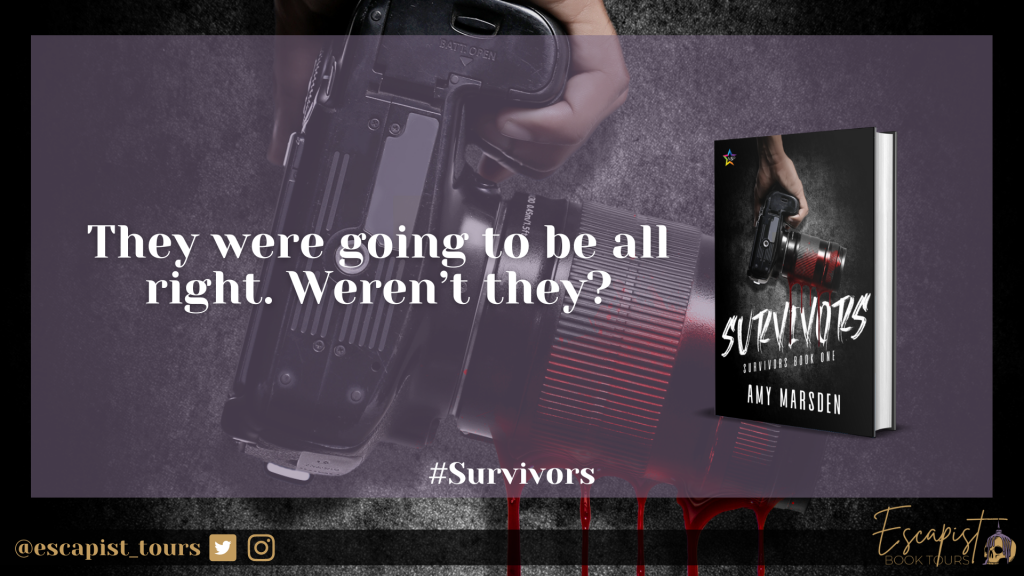 I received this one from Escapist Tours in exchange of an honest review.

😍 Loved that our MC took her camera with her at all times, though I wished she had taken even more pictures. But DANG those are some great batteries. Or maybe my camera is just old. Haha. But mine generally lasts for a day, maybe less. I loved seeing her make pictures of things and also looked back at the moments with her family.
😍 THAT COVER! I just love her holding that camera and blood dripping off it.
😍 Seeing how the immunity works for her and also what she went through. I was so worried even knowing that she was going to be immune because she went in pretty deep and at times it seemed she would succumb to it. I hope that someone is able to find a cure for it. At least she is treated better than how immune peeps are treated in zombie books generally.
😍 That we got 3 POVs. OK, James I didn’t care much about and I was just looking forward to him being done chatting, but I loved Jennifer (#1) and then Victoria (#2). Victoria was an interesting character. At first you just think she is brave and then you find out slowly that there is something different about her and you wonder what is going to happen next. I hope that the next book tells us more about Victoria and if her violent tendencies will be more and more pronounceable.
😍 Loved how Jennifer is Bi! I am Bi myself (maybe pan, still not sure, for now Bi is the best one for me) and I am always happy with well-written Bi-characters. It is sadly still not always well done or the characters face tons of biphobia. I was glad that the crew accepted Jennifer. Though Wright should really learn some freaking respect. Yes, Jennifer is out, that doesn’t mean you can just tell peeps she is bi. That is her thing to tell. Not everyone is accepting.
😍 The infected were scary, especially since they weren’t dead monsters.. but still human somewhere in that anger/paranoia. Which makes things just a tad scarier. I mean, dead things are scary, but someone who is still somewhere there? Rambling? Having all the mobility of a human? NOPE.
😍 We learn quite a bit about the characters as the book continues.
😍 Thought this would just take place in England, but oh no we are going to France! Haha, which brought along some language borders as almost no one knew French. Which would also be a problem for me. I mean, I am good at English and of course Dutch, I can read/understand German. But my French? I may understand some words here and there and reading-wise just as well, but French was the worst class with a horrible teacher and so I blocked out most of it. Plus, the lessons here focussed mostly on getting those words in your head and less on conversations and such thing.
😍 Had such a laugh when the virologist was like: “OK, who thinks they are immune?” and the kick-ass reply of Jennifer to that including stripping her arm and showing the bite marks. Haha, that sure stunned that dude. XD
😍 I just wanted to give Dan such a big hug. He was so precious and my heart just broke for him for all he experienced in those days. I am glad that Dan has found Jennifer and found some support in her and also supported and helped her out. They bonded and I love that.
😍 Those first chapters when everything goes to poop? AWESOME. Scary. The scariest of the whole book. I was terrified. The infected running amok, people with power-crazy ideas running around. Burning buildings.
😍 While I love that the military took action immediately if someone was bitten/potentially infected, because DANG that doesn’t happen often in books like this. Maybe, they should have taken people separately, because that was just gruesome. I mean, that is someone’s friend. Someone’s family. You can’t just do that before their eyes. Do it discreetly.
😍 I loved that slow-burn romance between Jennifer and Alexia! Definitely shipping these two!

🤔 I missed the action, but also not. There were some kick-ass moments with infected or with some craycray people who did stuff (mostly military). But for a lot of the book there is a lot of dialogue. A lot of thinking. A lot of backstory. Which is nice. But I kinda also wanted more excitement, more the feel that this was SERIOUS business and that danger is everywhere. But as I also said, sometimes I was OK with it. All to do with Corona I guess. Normally these type of books with zombies and infections are all good, but these days I just have a harder time reading them. Sorry for the confusion!
🤔 The ending just felt a bit sudden. I mean, I had hoped for just a bit cleaner ending. But I did like the ominous message at the end. That is why it is listed under this emoji.

😵‍💫 Never had this problem before Corona, but DANG it was hard to read about the virus and the lockdowns and the food shortage and all that. It just hit WAY too close home and I was just uncomfortable for most of the book. I was happy when it just veered back to infected/zombies and some other stuff.

All in all, I did have tons of fun reading this one! I am happy that I decided to take the leap and read another zombie book. I have been reading less of those since 2020, but I thought I would just do it. I cannot wait for the next book in the series. 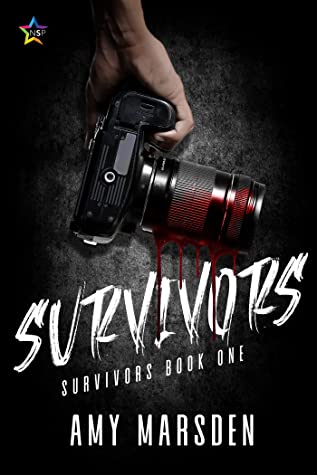 Jennifer planned to spend her 24th birthday having fun with her friends. Instead, she ends up running for her life through the dark streets of London.
Her world is torn apart by a new disease, the likes of which have never been seen before. The government’s decision to conceal its deadly nature exacerbates the panic, and in all the confusion Jennifer is bitten.
That’s it, right? Her life is over.
Wrong.
Immune to the viruses ravaging effects, Jennifer finds herself with a small group of survivors. Together they must fight to stay alive long enough for a cure to be found. Humanity won’t be beaten to easily.
But madness looms large, and safety seems forever out of reach. 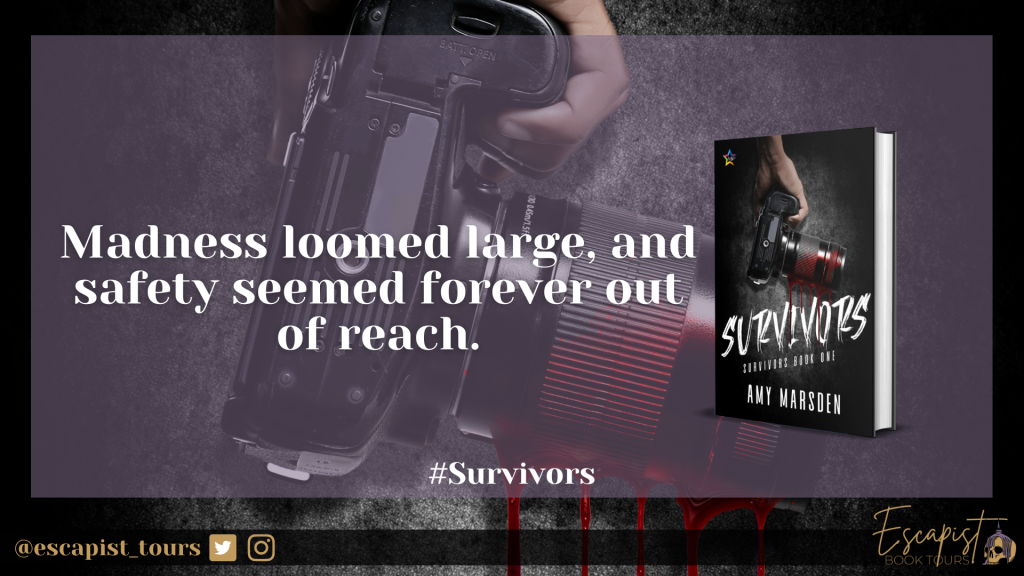 As a child Amy loved reading and writing, so naturally she graduated with a degree in biomedical science and has worked in a microbiology laboratory ever since. Her passion is writing however, and she turned back to it during her years at university. When she is not writing about surviving apocalypses, exploring space, and conquering magic–all celebrating queer love– she can be found reading or playing games about those very things.
She lives by the sea with her wife and their fifteen-year-old cat, who still runs around like a kitten.
Amy is the author of the SURVIVORS duology, SURVIVORS and THE SAFE ZONE, and has more works in progress.