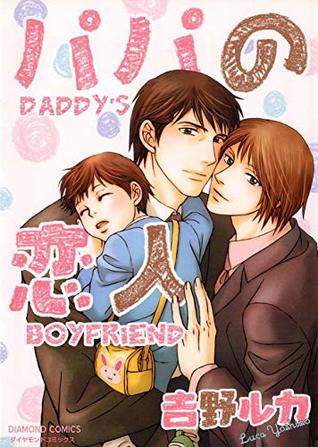 A bundle of 7 stories featuring the titular story and some others. Very miss sadly, but there were two stories I liked.

I wrote a short bit for each of the stories + gave them a star-rating.

The first story was cute, but I found it a bit rushed and also a bit overdramatic how the kid reacted when the guy wasn’t coming at first, like come on. But other than that I did think that the couple was cute and I was definitely rooting for them. The sex scene was cute and I laughed so hard when Takumi talked to the son at the end. Oh my! I would give this story:

This second story wasn’t too my liking, I mean, so the guy is constantly leaving even when his partner is finally honest and all that? I just couldn’t make sense of this story. The sex scene was nice and I was happy they finally talked (even if it took a bicycle lock to keep someone close). I would give this story:

The third was cute at points… but I am just not into cousin relationships. I am sorry, that is not my thing. You don’t fuck/get a romantic relationship with family. No. I would give this story:

The fourth, awww that was both sad and heartbreaking but also beautiful. I loved that Uragami didn’t give up and tried to be there for Tokitsu because he noticed the other man was lonely and sad. That he could use someone who loves him. That he could use someone new in his life. Loved that ending, I wouldn’t mind an epilogue. I would rate this story:

The fifth, nice story… but also not. I mean, it just was too much, maybe if the guy didn’t have a girlfriend already it would have worked, now it just felt awkward and weird and I just couldn’t ship these two together even when he and the girl broke up. It just felt hurried. Like, OH I just got dumped yay, sex! No. I would give this story:

The sixth, unsure. I mean, isn’t he the teacher? Also why is in in his room while the guy sleeps, is he Edward? Is this creepy? Yes. Yes. Yes. Not to mention that the next time this happens they had sex… The story just didn’t make sense and I found it way too creepfest. I would give this story:

The seventh: Mm, another teacher story? Sometimes it works, but this just lead to sex and sorry, but no no no. It was just a big nope. I mean that the student was interested in the teacher, OK, but that the teacher himself was interested in his student… no dude. Just no. I am glad with the ending but still you guys just had sex… so no. I would give this story:

As you can see I had some issues with the stories, but there were also 2 stories that I liked. Despite that I wasn’t too big of a fan for this bundle, I am still happy I had the chance, thanks to Humble Bundle, to try it out.