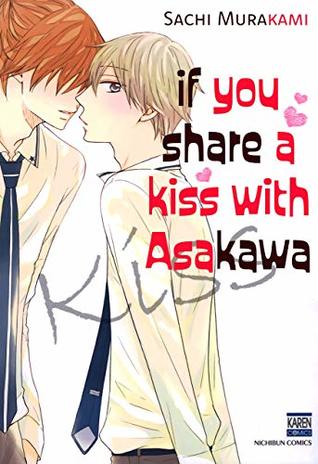 As I said in my review for Apples and the Beast I just wasn’t in the mood for a normal book in the evening of 31-5, but I was in the mood for some manga! Thankfully, I recently bought a Yaoi Humble Bundle and this was one of the two manga I selected last evening to read. This one was definitely my favourite out of the two. Two lovely couples. Two sweet stories. And a lot of steam, well at least in the second story/second couple part.

The first couple takes a while to develop but it is quite rewarding when things get going. Meet Izumi. He is very much interested in Asakawa, well that is Ibuki. Yep, there are two Asakawa’s, twin brothers who both attend the same school. But the one who is following him around? Is the other twin brother. Haha. I just loved this story and I am happy that Izumi and Satsuki got closer and closer. I loved how Satsuki took Izumi out for all sorts of fun cafes to eat cakes (even though he wasn’t a fan of cake). He made it seem like he was just doing it for Izumi and Ibuki (as he writes blogs about sweets), but I could clearly see that he was very interested in Izumi and that he was willing to go to cafes with sweet stuff just for him.
I wasn’t such a fan of the other twin, aka the original love interest. He has some clear opinions on things and though we do later get more of an idea why he thinks this way.. it kind of soured him for me. That he would say those things like that.
We find out that Satsuki has some issues with an ex of his. They only kissed apparently but the guy isn’t letting Satsuki go and threatens to kill himself if Satsuki isn’t coming. I was very much shocked by this and I just wanted to jump in and tell Satsuki no, but thankfully, he has his brother and Izumi. Izumi is also not happy with it and well, he has some ideas on how to keep Satsuki close. XD
I loved when they finally confessed their feelings for each other and shared a very lovely and hot kiss. I was just squeeing in delight because I was definitely seeing a spark between these two early on and was hoping it would become a fire. That Izumi would see that Satsuki is just a better match. Sweeter, kinder, better.
I also love that the author added an extra chapter at the end of the volume! Our couple is still going strong… and it seems that the virginity card may be lost soon. 😉

Next up is our next couple, Rio and Etsu! Oh boy, I just loved this couple so much! They were adorable together and they had tons of sexy times going on, including one with some coughs extra equipment, teehee. I loved how they managed to always get it on, even when they were going to a festival, oh my. The attraction between these two just jumped out of the pages and while there wasn’t a lot of story or how they got together, I was still rooting for them and I found them a great couple.

I also quite liked the art! The sexy scenes were well-drawn, though sorry, I was laughing because you never see their penises and balls. It is just as if they are sucking on air. XD

All in all, recommended! This was a very fun one! A bit tame one in the beginning with a couple you want to root for and then the second couple bringing in all the spice.