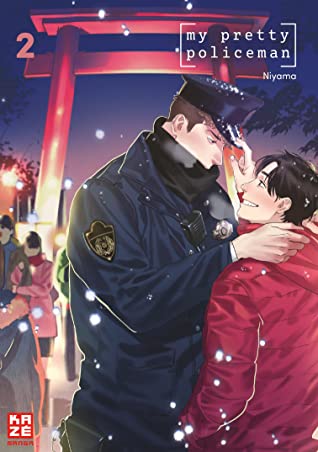 The second volume! More romance, more sexy times, and the guys are moving in together~

The third book of the 4 German manga I bought. I just had to have this one and also the third volume so I could finish the series. I wanted to know how things would be going for our two guys, now that they know of their love what will be next for them?

In this one a bit of time passed and our boys are moving in together! I was so excited for the two of them to be able to do that. To be able to be closer to each other. Because due to work and whatnot the two haven’t been going out a lot. But we see that the age-difference is catching up to them. Seiji isn’t the youngest (though also not old by far) and he notices that he is just more tired. Not to mention that his doctor (he had to get a colonoscopy) and that he had to be more moderate about cough certain activities. Shin overheard that conversation… but thankfully there was minimally drama for which I am thankful. These guys talk. Seiji even comes home earlier to have that talk. We really need more adult manga (or adult books) with people TALKING. I loved seeing them together in their house, cooking food for each other, sleeping together, watching tv. Sex.

These two are just the cutest. For reals, I am just squeeing in delight at how mature they are but at the same time also quite silly. Shin is definitely the more serious one, but Seiji is a wild card. But they match so well. I just adore how Seiji arranged THAT for Shin and even had an another present for him. Teehee. And there were many more moments that had me go aww or ohhh these two are just perfect. I am so happy for them.

I loved that we saw Seiji’s friends and I had a laugh at their conversations. Oh boy. I can imagine that for these guys it is a bit weird to go from drinking and talking about hot girls/boys to colonoscopy is quite the change. XD I did love that they were apparently on the same train to the same place as Seiji and Shin. Well, there goes the 2 days of just the two of them, but I have to say I just love his friends so I didn’t mind it that much.

I had such a giggle as the guys tried out endearing words for each other. They just couldn’t take it seriously.

Again I just love the sex scenes, and BOY there are a lot of them in here. fans herself because she is so hot now Shin and Seiji are insatiable, well, especially Shin. XD That guy has stamina and plans. I just love how well the sex scenes are drawn and once again yay for barely any censorship because it is just so strange to see light bars and beams. Just show me the goods.

All in all, this was fantastic. Sexy, sweet, mature, fun, a bit silly. I would recommend this one to all.