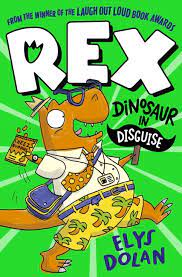 A laugh-out-loud book featuring a T-rex, a Yeti, and a human girl who wants to figure out what is going on.

The newest Elys Dolan and I was here for it! I love her books and been collecting and reading them for some time so I was ultra hyped to see her write a book about dinosaurs! And also other beings given we also meet Nessie and Dodo.

😍 Rex was such a wonderful character. I can only imagine how it was for him those first days. Waking up in a melted ice cube, getting to a whole new world. Figuring out money (OMG, I would have done the same as he with that card), getting a job, making friends, staying low because humans will not be kind (though there are also good humans thankfully), eating stuff (because can I eat tires or is that a bad idea?), figuring out speech, how to dress (which had me in stitches especially with the socks on every part), and more. I was rooting for Rex.
😍 Rex was trying so hard and I found myself rooting for him. He made some mistakes, but could you blame him? He has been frozen in ice for ages and all this human stuff is just so weird and strange and at times not comprehensible. I am not sure if I had done better. I loved that despite making mistakes he kept trying. Trying to find something. Trying to do his best. He made amends, said his sorries, tried to fix things. I was so proud when he finally found something that he could do. Something that just fitted him better than watching kids at the pool.
😍 On that note, can I be part of those lessons? I want to do all those activities! Much more fun than yoga or boring old fitness.
😍 I wasn’t sure about the human POV at first, mostly because I just found her a tad rude. But then I remember me at 9 year old and haha, I was the same. I also had some exciting investigations about strange things happening in my neighbourhood. XD Too bad it never turned out to be anything awesome, I wouldn’t have minded making friends with a friendly T-rex and his friends. I liked that she wasn’t just meddling, but that we got to know her as well. We learn of her broken friendship, bullying that happens now, a new friendship being made, and her standing up for herself.
😍 While the parents of our girl weren’t always my favourite, I just wish they gave her more attention, I did like that they at least tried to give her attention and at the end they did that for her which made me smile. They really do their best.
😍 The names of the triplets had me in stitches. I guess the parents weren’t prepared for triplets? XD
😍 Loved meeting Dodo and Nessie and see them do their thing. Though seriously, how blind are people to not notice. There is acting as a human, and there is a clear bird serving you food. Or a water whatever (even Nessie is unsure what they are) in the pool. Haha. I am happy that both of the characters can have a happy life now. Nessie was clearly not happy (and I can imagine, being stalked all the time when you just want to swim is no fun) and Dodo also has very clear reasons.
😍 I loved Big Foot/Yeti. I had a laugh at how serious he was about his job and about everything else. I get where he is coming from, no one wants to end up at a zoo, but I just thought it was funny he was so serious. But in the mean time had a big addiction to some snacks. I was happy to see him warm up as the story continued. See a different side to him and also see that he was seeing in that he may just have been trying a bit too hard.
😍 The ending was OMG and WHUT and NO, and then YAS and WHOOP! You will just have to read it to find out which word goes where, but I can tell you that the ending just made me smile, after being shocked first of course. I was kind of expecting it to happen, but since nothing happened I thought it wouldn’t happen anymore. Big surprise.
😍 The illustrations are just super duper fabulous. I just love the style and I loved how the characters were drawn.

All in all, highly recommended to everyone! This laugh-out-loud book is perfect. Dinosaurs, fitting in, friendship, and more!