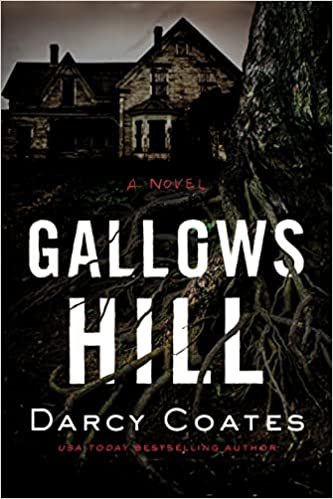 I was so so HYPED when I saw that Darcy Coates’ newest books were on Netgalley. I just adore her work and so I had had to request it! I am thankful that the publisher allowed me to early read both books! First up was Gallows Hill because I was in for something haunted house/spooky!

In this superscary book we meet Margot! A girl whose parents died and now she has inherited the house and the winery… but the problem is? She hasn’t seen her parents since she was a kid. You can imagine her feelings towards her parents. She is both curious and angry. But she is willing to give it all a shot. She doesn’t have much left in the city she came from. But right from the first day.. she sees things. Hears things. There is a scary statue downstairs (of which I never could grasp how big or small it was, for me it was a tall tall statue). There are eyes shining in the dark. You can imagine she isn’t too excited about the house and it is just the beginning! Margot was a really great character, though, haha, also a bit too much like your standard protagonist in a horror. Ohhh, I shouldn’t go to the scary thing, let me go to the scary thing. Oh the attic. Yes, let’s go! But I was proud of her because she tried to do things, she tried to learn more about the curse, about her family.

The curse? Especially when it started really kicking in? Welp, the book went from scary bells to seeing things to OH HEY look the dead are rising! Fun! NOPE. We learn a lot more about Gallows Hill, about the Hull family (and the two brothers), about why Margot spend her childhood at her grandma, about the house and a lot more. I was invested. And I was wondering why people who just stay! But as we find out… leaving isn’t so easy. Especially not if you are the owner/family. It definitely made things even more spooky and scary and at points maybe also a bit hopeless. Because you cannot run. You cannot hide. You just got to play tag with evil (though you shouldn’t be tagged, but you get it XD). I was definitely terrified while reading it. Haha, I thought I could read this at night, but I definitely wouldn’t recommend that. XD There also some gore parts that had me feeling queasy.

We also have other characters, Kant, Nora and Ray, Witchety, Marsh (succcchhhh a good boy). I really liked the side characters cast! They each were special and I really liked learning more about them. And boy, I would love a novella just all about Witchety! She was such an interesting and sweet character!

At around 80%-85% I was a tad worried. Because it didn’t seem like an ending was coming. Would we be getting a second book? But I couldn’t find something about that! So I kept going and as we neared closer and closer to the end I finally saw something that promised a real ending to come. While I was in the end quite happy with the ending (it was quite scary and shocking), it also felt a bit abrupt. Sudden. I think it would have been better if the book was either a tad longer (yes, really) or if things were just better done time-wise.

As I said the ending made me happy, well it shocked me as well. That this is the truth about the curse. WTF is wrong with these 10-11 generations to choose that? WTF! I was feeling slightly sorry throughout the book for the families.. but after that revelation? No. OK, maybe for the kids unknowingly dragged into it. But the parents. Heck. They deserve things.

All in all though, this was once again a very epic and scary Darcy Coates, she did it again!

2 thoughts on “Review for Gallows Hill”