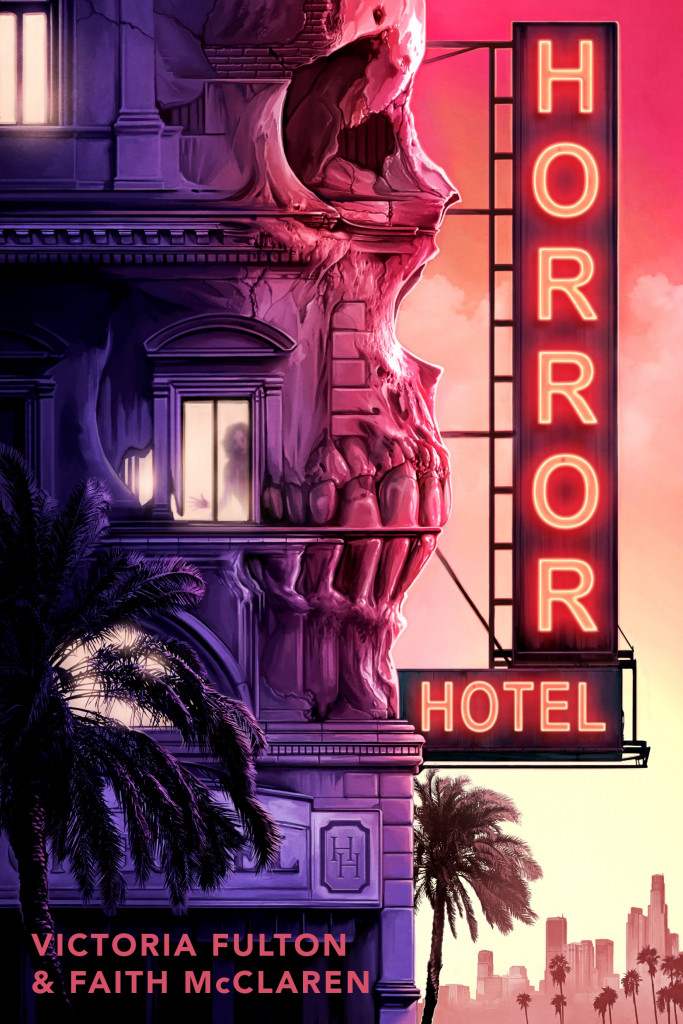 “It’s shimmering,” she says, her voice low. “Like the hotel itself isn’t all here at once, all at the same time.”  + “Blood drips down the elevator doors and pools over the tile floor of the lobby. The doors open, and it’s raining blood, staining the carpet and mirrored walls inside the elevator car.”

I have been eyeing this book for a while, it even was one of my most anticipated reads of 2022, and now I finally had time to get to it! And boy, I am glad I did. This was a spooky ride. It was awesome!

😍The hotel was 100% creepy and scared me till bits. Didn’t help that next to ghosts and blood dripping left and right we also have a murderer in our midst. I loved how the author wrote the hotel and how it was as if we were right there! Standing next to the teens and following their moves as they walk through the hotel. I am glad I can watch it from this distance though, because HELL NAH I am getting inside that hotel. FREAKING NOPE.
😍The cover! Featuring my favourite colours purple and pink! Plus, I just love the spooky apparition in the window + how the hotel is shaped like a skull. Spooky!
😍Chrissy! She was definitely my favourite character of the whole book. She made some dumb horror mistakes, but that is OK, everyone does in this book, haha. I loved how she was able to see ghosts and how apparently beanies or at least having something on her head, helped her out. Drowned things out a bit. Made things a bit less worse. I felt for her throughout the book though. Because whereas her friends were relatively fine, she just didn’t have a clue who was dead and not and going to places drained her completely. I did admire her for her bravery. Yes, at times a bit dumb, but I also found it brave that she stuck around. That she actually wanted to help Eileen and the other ghosts in the place. That she was willing to stay despite everything.
😍The show! Which I now desperately need to be real because I would love to see it. I want to go along with them on other adventures and see what they witnessed in other spooky places. Please, author write another book with these characters. Either a prequel (or a bunch of them) or a sequel (and a bunch of them).
😍Blackouts! To add to the creepy environment we also get lovely blackouts. Yep. So at times you are scrolling in scary as hell parts and suddenly BOOM bye bye lights. Oh man, it added to the book so much. I am glad the author added it.
😍Ghosts! We have many of them scrolling around. Some good. Some very dead. Some sad. Some bloody. Apparently the hotel is a good spot for committing murder + it is so very hungry… I loved seeing what ghosts roamed the hotel, of course, I was also saddened because of who was haunting there. Those poor girls. The woman in the elevator, holy NOPE NOPE NOPE.
😍The elevator! Well, I guess it is high time to just take the stairs and hope you don’t find anything there. But seriously, that elevator? Nightmare zone! Especially for Chrissy who can see what is in there. From dead girls in corners to blood and brains. Lovely!
😍The ending! Woah, Chrissy! Go girl! This was such an exciting ending, yes, I was also shaking my head because I already had an idea what was going to happen and knew it fell in your typical horror stupidity stuff, but I was also very much in it because it was an epic ending.
😍Epilogue. I loved that the author added this epilogue to the mix, I always appreciate it when an author does that. Just giving some more extra information. Showing us where the characters are now and how they are doing.

🤔Though confusingly when they step in the room the author mentions the aircon goes on. Then mentions the characters feel a chill. Then the temp is measured and it is said to be “wall of hot” then even later Chase says this: “I don’t think this room is even air-conditioned.”

😒People who CONSTANTLY correct people on their use of words (in this case guys, dude, and other more male (or female) oriented words) get on my nerve. If someone constantly was correcting me? I would either just unfriend that person, do it extra, or just get quiet because apparently I suck and cannot do a thing right. 😐 I don’t mind if someone just does it occasionally, but this character just kept going on and on, even to the point correcting someone who says dude to a FREAKING GUY. Yes. Really.
😒Chase and his jealousy. It just got so boring and old. Like, boo, you had so many chances throughout the years and yet you have just been lurking around not doing anything. You cannot be freaking jealous if the girl of your dreams goes for another guy. You may not call him names. Be rude. Hate him. Make shitty remarks. That is just not cool. You had your time to say something to the girl. Just leave it.
😒I agree with other reviewers, the romance at times got a bit in the way. At times it felt like it was taking over the horror stuff and that was a shame. Yes, I was happy we had something soft and fluffy in between all the scary stuff.. but seriously, at times I just was done with the romance.

All in all, fantastic to read! I read this in one go and I would highly recommend this one to all! Pretty great characters, fantastic horror, scary ghosts, a murderer, and more!