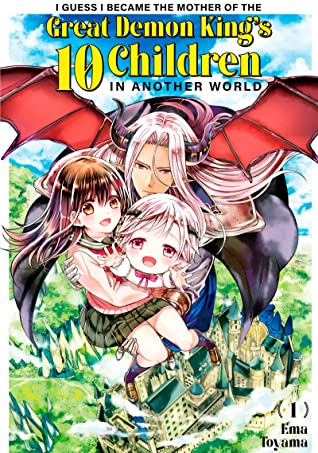 A fun manga about a girl getting isekai-ed, becomes a mom, and also tons of demons and more.

What to do when one cannot read, but still wants to read? You take a manga from the manga bundle you bought some time ago. This title just grabbed me and I was curious to see what would happen.

I am very happily surprised by this manga. A girl, all alone because her mom died not that long ago, makes a wish to become a mother at the same time when in another world they are summoning for someone to come to their world because they need a mom. It sounds pretty wrong, but unlike what you may think there is no sex. Instead potions and cookies and such work just as well to get a girl pregnant. And demons apparently come from eggs. Yup.

Akari was a very interesting MC, I really liked her from the start and loved that despite being scared she tried to make the best of the situation. Tried to understand the demons more. Tried to change things, like how she tried to help them out when the troops came back from the fights/war. And then when her first kid is born, An, she tries to make sure that An is never going to be on the battle field, I found that very admirable given how the demons view things. I also loved how Akari was with An, how she cared for her, made sure to give her plenty of love. She really became a mom and she is darn good at it too. Though there is a lot to figure out given she has a demon-daughter. How to give milk. How quick do these demon kids grow up? Wait is she talking already?

The Gran King was a pretty decent character. We learn why he is so stand-offish. We see bits of his past. And he turned out to be a pretty good dad despite not always being around and Akari having to remind him at times. XD

I also loved seeing her and the Gran King get closer. He is still very stand-offish and she is still a bit scared of him, but I loved that they chatted. That they tried to connect. And I was just thinking it was too sweet how she cared for him when he was sick. I am definitely shipping her and the king together after this whole volume.

We also learn a bit more about the world. There is a war going on between demons and humans and things aren’t going so well. I hope in the next volumes we see a bit more on the demon/human war and how it started. And if there is a way to bring peace.

There are also several side-characters, for now demons, that were pretty good/interesting. I liked Jyll (I believe that is how you spell it). She was a bit stand-offish about things, but I really grew to like her.

The ending was both sweet and exciting because of course the manga has to end on a cliff-hanger. ARGH!

Oh, and I wonder if this is really the game that Akari was playing/had played in the past. Because there are a lot of stuff that match with the game. Or if this is just a world that matches closely with that game.

I really enjoyed the art in this manga, great character designs. Though I hope that someone can give Akari some new clothes because I just cannot imagine having to wear the same school outfit all day every day.

All in all, I will be continuing this series. Well, for now I am stuck after volume 2 it seems, but hopefully there will be a new Humble Bundle or some sale so I can get the rest of the series. I need more! I need to know if Akari will get more kids. If she and the Gran King get together. And hopefully no love triangles (we still have the human hero after all).