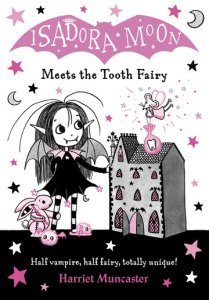 In this pretty fun book Isadora loses her vampire tooth and meets the tooth fairy.

I was so excited for a new book in the series! I read this one in Dutch, but writing my review in English so more people get to know about Isadora.

I just loved to read about the traditions of fairies and vampires. The vampires are proud of changing their teeth and hang them in a frame on the wall. Whereas fairies put them under their pillows and get a silver (or gold) coin from the tooth fairy! I could imagine that Isadora wasn’t sure what to do, I mean, she is both fairy and vampire so which one to pick?

I also love the theme of changing your teeth. It is such a big event in a child’s life. The moment when you start to have wobbly teeth and get a whole set of new ones.

It was great that the dad took her along to the dentist and made her see what was going on during a visit, plus also added a reward. Which I just found sweet. I also am happy that he accepted her decision after that first visit. He didn’t get angry, yes, he was disappointed, but he accepted it.

But I did think it was a bit meh how the tooth fairy acted when she found out that Isadora hasn’t been to the dentist yet. Um, as Isadora says to her friend, vampires DON’T go to the dentist until their adult teeth come out, and since until now she has had her kid’s teeth, I think it was a bit weird that the toothfairy was all huffity about it.
Plus, I found it a bit preachy in general. It felt at times more like a booklet for good kids to remember to brush your teeth. Dentists are not scary (not agreeing fully on that XD). Go to the dentist often. Get new brushes. Blablabla. Just like with another Isadora book about climate change/cleaning up the planet. Not sure about the last topic, but I have read some really fun books about tooth fairies and also about brushing, but this one just felt too pushy.

Also, if someone has hidden their teeth that well… just don’t go into their rooms and make a chaos of the place they may have hidden it. Seriously. I would think the number one rule for tooth fairies should be that a child has a choice. Not on the bed/under the pillow. No deal. Done.

I did love that the tooth fairy was a mouse and that they had a fun midnight picnic. Plus, I loved that Isadora found the perfect solution for what her mom or her dad wants. I am also glad that her parents left her to the choice. Didn’t push it.

I loved the fun extras at the end. Making a medal, a fun quiz, a recipe.

The art was once again fabulous. I just love how cute it is.

So all in all, despite the OMG dentists are good and brush your teeth stuff, I did have fun. I am happy to meet yet another magical creature, see some more of Isadora’s life + get a dose of cute illustrations.