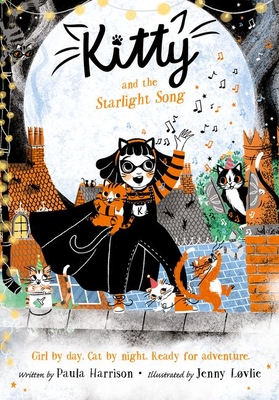 A wonderful book in the series, this time courage, a birthday party, stolen pearls!

I was excited when I spotted this book at one of my libraries! I was hoping with all hope that there would be no George in this one (sorry to the fans of that guy but I am not a fan) and that this would just be Kitty, her cats, and tons of adventure! So thankful that it indeed turned out to be that~

In this one there is a ton of things happening. First and foremost, Kitty’s class is singing a song and there is a solo for her! But Kitty has stage fright (I recognised it from the times I had to sing in front of a big audience) and she feels very unhappy about things. Throughout the book we see her think about the song… about the performance coming up. I was hoping that she would be able to sing. That she would be able to step over the fright. I was happy that even the cats were helping out and thought of a good plan.

Then there is a thief around, that one kitty that is so good at climbing is back at it again and I was happy to see her. Yes, she is not the one I like the most from the cats, but I do love how she apparently never learns. XD And how she reacts when someone confronts her with what she did. I am glad that she also showed another side to herself later on in the story.

And lastly we got Figaro (I don’t know if that is also his English name) whose birthday is here! You would think this was a big celebration and that was the plan.. but Figaro hurt himself and he doesn’t feel happy or comfortable. I just wanted to hug him so badly, that poor thing! I am glad that Kitty decided that the party must go on and that she was going to make it the biggest party EVER! All the cats invited. All the yums! Music! And also something to make Figaro feel better! It was just so much fun to see Kitty and the other cats make a big evening for Figaro and I wish I could just step in the book and party with them (well, OK, maybe a bad idea for someone with allergies, but hey XD).

The ending made me smile! It was the perfect ending to this story~

The illustrations are still fabulous and I love love the style. OK, well, sometimes things look a bit odd (like Kitty’s mouth).

All in all, a book packed to the brim with fun, excitement, finding courage, and cats! Recommended.