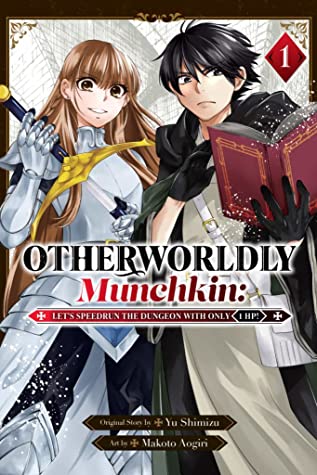 A book about a brother dedicated to find his little sister.. in the new weird world they both apparently now inhabit.

So, I wasn’t planning on writing a review today. In fact, not at all for this book. However apparently a Release Day blitz didn’t go through or something, I don’t know, I haven’t gotten any mails regarding it. sighs And I do want to have 2 main/big posts up, maybe one day that will change, but for now that is what I would like to do for my blog. So here we are!

I loved that the manga began immediately in the nitty gritty. Boom. Scary things happening! And then we go back to how it all began. To why this guy is searching for his sister. And what this world is. I definitely loved how the manga did this. Gave a glimpse into what we can expect and then tells us how it started. From how Yukito and Sana had a good sister/brother relationship and how they met an ogre outside of their home (yes, really, modern day Japan isn’t what it was, haha). From that moment they are separated… and in a whole new world. A world that is not safe for anyone.

I was a bit worried that maybe with the book and the 1HP Yukito would be freaking overkill. I mean, I have read some other books with MCs being isekaied and having 1HP but having some other skill and all of them are overpowered as heck. But our MC is pretty normal. He really has to work and fight and flee to get anywhere and I loved that. I definitely found myself cheering for him. Hoping that he could build up some skills to get over that hurdle of being 1HP. I do love how he tries everything he can to find his sister. So far we haven’t found her, but our MC is working hard.

The book? Where can I get one of those? Do I also need to steal it from a goddess (who may be evil, but also not, we don’t know yet)? Because this book looks so handy. You can instantly find sheets on people you meet (though it doesn’t tell you everything, teehee), what to eat, and everything else. It is a manual/guide to the world.

I do have to say that at times I was a bit confused/wondering which way it would go. I mean, our MC has his problems with the 1HP and figuring out things and then there is his companion a girl who cannot even lift her own sword and struggles with a lot. There is an overpowered horse (who is awesome btw). At times it felt much like a comedy, but then it would get gritty again.

The art was decent. Not always my cup of tea, but still fitting with the story.

All in all, I definitely need to know more about Yukito, will he get stronger? Will he ever get more then one 1HP? Will he find his sister? What kind of gruesome/gritty things will he discover next? I will keep on reading. Would recommend this one if you want a not so overpowered character in an isekai-ish world with tons of scary situations.