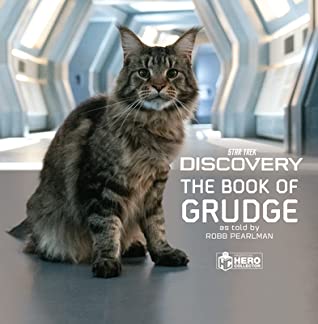 It is time to meet Grudge, the cat from Star Trek Discovery!

Confession, I have never watched Discovery. After Voyager ended in 2001 I did give the next generation of Star Trek a shot but it never worked and so I gave up on the franchise. I will stick to Voyager and before that generations. But I still couldn’t let this fun book slide. I love cats + I still love Star Trek even if this wasn’t the generation for me.

In this adorable book we meet with Grudge. Through photography and illustrations along with quotes, haikus, opinions (on humans, space, Starfleet, catnip, food), and more! From being disappointed that Mycelial Space doesn’t contain mice to a story about his owner to pets and favourite vets and space. I loved how the author managed to capture a cat’s personality so well. Grudge really thinks she is the queen. The boss. The one and only. Evidenced by this opinion on the Verukin Nebula: “Ground Zero for The Burn, which I’ve been told is a terrible thing that happened. But I’m much more interested in the Cat’s Eye Nebula, which I’m sure was named in my honor.” I had fun reading about Grudge and see her thoughts.

Also LOVE LOVE LOVED seeing Spot making an appearance. It was a short one but I was all there for it! I love Spot.

Plus, as I said, the book is filled with photography and illustrations, almost all about Grudge with a few exceptions (when talking about humans or other species). I really loved the photographs, Grudge is adorable and cute. And the illustrations were also fun!

All in all, an adorable book. You read through it pretty fast, but it is a book that I will be re-reading because it is the perfect book for in-between or when one has an off day.