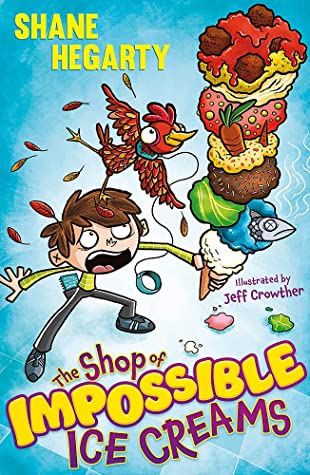 Meet Limpet. No, that is not his real name, his real name is Liam. But everyone calls him Limpet. He tries to get people to know his real name… but for some reason that never sticks. Even in his new school. XD I liked Limpet. Yes, he is a worry-wart which at times annoyed me a bit, but for most I found him a fun character and I could kind of understand some of his worries. I liked that he was our MC and I loved what he all did for his mom and her soon-to-be ice cream shop. He didn’t just stand by and let a bad guy win, oh no, he tries his best to think of ways to help his mom. Which includes lucky/magical lemons. I also liked seeing Limpet grow as the story went on. In the beginning he was quite a worry-wart and would rather just stick to vanilla, safe safe vanilla. But with each new thing that happens he discovers bravery, strength, and wit. I really liked that!

Limpet’s new friend, Norman and his chicken Curtis, were a fun addition to the book.

I had a laugh at the parts with the luck, because when you eat lucky lemons.. maybe you should eat all of it. XD Though I do agree with what Mrs. Cricket said when Limpet met her again.

The ice creams however? I am very much unsure if I would want one. I mean, I like adventurous, I am not a vanilla only girl, but with all my allergies I just have to be way more careful and that doesn’t allow much adventure. Plus, brusselsprout ice cream? Or ice cream with fish? I am sorry. But that is just a hard pass for me. If those are the only options than I will just stick to vanilla. I did love how the mom was creative with flavours though I truly wonder how many people would want them. Yes, the book ends with a ton of customers, so in fiction it works. XD

The villain, Mr Fluffy (yes, really) was well-written, he was maniacal, strange, odd, and a great villain. I had a suspicion about his ice creams from the moment that Limpet finds that leak at the back of the ice cream truck. And as the story continues there were more hints and I was wondering how much longer this villain was allowed to go on. The reveal at the end was well done, very action-y very oompf. I had a laugh at the reactions of the people when they found out. XD

Not a fan of Limpet’s sister. Then again, I have a hard time liking little siblings in stories. Generally they are written in an annoying way and you just want to yeet them out of the story. The same goes for Limpet’s sister. I just didn’t like her. Not at the beginning. Not at the end.

Mrs. Cricket, aka the mysterious lady in the garden-roundabout (which was totally epic btw and I want to visit) was an amazing and kick-ass lady though she should work on the delivery of warnings. I mean, you know that there is a busy roundabout next to you while you talk, maybe talk louder or ask if people heard you. Then again, then we wouldn’t have had all the hilarious stuff that happened in this book. The garden sounds amazing and I want to meet the fairies and see the fruits and vegetables. We know of a few, but I am sure there are many more to be explored.

The illustrations were perfect, I just love the style and how well it fits with the story.

All in all, this is a wonderful summer book that I would highly recommend!