A suspenseful welcome to the Blog Tour for Fate in Suspension by Archer Kay Leah! Squee! I am so hyped to be part, this book sounds GOOD! 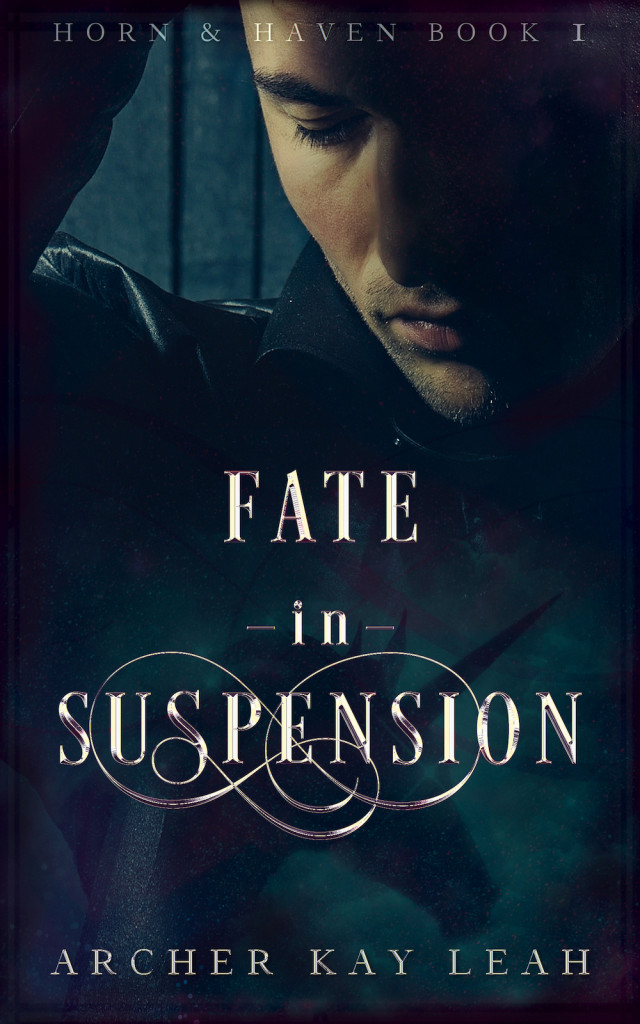 Quiet. That’s how he likes life, no drama to clean up…

Tai Xen-Vorsy leads a straightforward life: work, time at the local clubs where shapeshifters like him can play without fear, and the comforts of home with a cat that’s more than half attitude. After breaking up with his last submissive, he’s even taking a break from Dom duties.

Meeting Gates changes everything, and when Tai’s childhood home is destroyed, his simple life goes up in flames.

The Callensdale haven was his refuge as an orphan, a hideaway that saved his life. Now it’s time to return the favour. Bringing in the Fluff Brigade Brotherhood would make all the difference… if he could just get them back together. Tai won’t give up—he’s not that kind of unicorn. But can he reunite the brotherhood and keep his new relationship with Gates kindled at the same time?

The darkness is dragging him into the shadows, one case at a time…

Helping others is all Gates Colfaethe wants to do, being mostly unicorn shifter with a splash of Faerie. But years as an agent on trafficking cases leave him fearing just how far he’ll lose himself in the job before he burns out completely.

A random hookup with Tai might be the very change he needs. A new Dom means new rules and the chance to create safe distance from work—until his worlds collide in a twist Gates should leave well enough alone. What he knows is bad enough, but running headlong into danger could kill him.

Horn & Haven is an MM+ romance series featuring a found family of unicorn shifters brought together by tragic circumstances. Friends out to save a magical world in trouble. Family fighting to protect those they love. Lovers falling for the kinkiest unicorns this side of their universe… Welcome to the Fluff Brigade Brotherhood.

Archer Kay Leah is an LGTBQA+ romance author that you’ll often find getting lost in strange, fantastical worlds with characters who can’t help but find trouble and shake things up. Fantasy and sci-fi romances are Archer’s speciality, especially when they’re complex and emotionally charged. But at the heart of Archer’s stories are friendship, family, and there’s always a happy ending–it might just take a whole lot of complications to get there!

When not reading and writing for work or play, Archer is a nerd of much geekery, loves music to depths that will never be contained, and is fascinated by behaviour, psychology, and ecology. Born and raised in Canada, Archer lives in London, Ontario with a non-binary partner who loves all things out there in the vast space of the universe.

Hi there! I’m Archer Kay Leah, author of LGBTQA+ romances with a fantastical kick. My deepest thanks to Twirling Book Princess for hosting me today on the tour for Fate in Suspension, my new unicorn shifter book! And thanks to all of you for hanging out with us. <3 Music is hugely important to my creative process, so here’s a quick taste of my playlist for Fate in Suspension, my longest playlist to date — over 100 songs, spanning various genres and moods! For this post, though, I’ll focus on the songs that became the “major themes” for the book. Though if you want to see the *WHOLE* list, it’s on YouTube! —> https://tinyurl.com/FISplaylist

Rhett George — Butterfly
This song made it to the playlist early on, during the planning stages of the book (especially the parts to do with the Faerie Ball and wings). Along the way, it became a theme for Gates and where he’s at in his life. It also played perfectly with the “Butterfly” nickname Tai has for Gates. I love everything about this song — Rhett’s voice, the key, chord progression, and how it’s an emotional, complex, and sensual musical package, perfect for this whole series!

SHAED — Trampoline (Stripped)
I can’t count how many times this song came up while writing this story. It became a fallback option at some point for where when all other songs seemed to fail. The song has a playful rhythm, bright tone, and lyrics that paint some really interesting pictures. It also applies well to Fate: not only is there a memory component, capturing the past that shapes perspective, but there’s that whole idea of embracing one’s fear. Or, in the case of Tai and Gates, working through trust issues and their fear of getting into a relationship since their previous ones fell apart. (This version even has a lovely piano track that gives me the goosebumps near the end!)

Kiiara — Numb (feat. DeathbyRomy & PVRIS)
This is mostly for Gates — where his head is at, especially when things are just too heavy. Lyrically, it’s not a perfect match for Gates, but musically it is, and it could maybe (with some flipping of the meaning) even be extended to the fact that Gates actually *needs* someone to get into his head and put him right; numb him to the bad stuff, because he’s not doing so well otherwise.

Boy Epic — Dirty Mind
This song is sooooo NSFW and it’s just… well… dirty-sexy! It’s one of the themes for the entire series, and where there is a sexy or kinky scene in Fate, there is this song! It’s been the source of a whole lot of ideas for certain images I wanted to capture in the story and feelings between the characters, including the last scenes of the book.

RIELL — All I Know
I LOVE RIELL’s voice, lyrics, and the way she brings songs to life. This is one of my favourite songs of hers, and I kept coming back to it for certain parts of Fate, mostly because it really speaks to Gates and Tai. They’ve both had difficulties in love and relationships, and they’re both scared *this* is how their new relationship will end up.

Eivør — Let It Come (Live at Studio Bloch)
Eivør — Only Love (feat. Ásgeir)
Eivør — Gullspunnin
Sometimes when writing, I find certain characters latch onto particular artists and just say “HEY! I LIKE THEM!” and it becomes part of their personality. In this case, Gates really loves Eivør. Her voice, music, and aesthetic keep connecting to Gates and things around him. “Let It Come” is perfect for that sense of letting go and giving into the good that’s possible instead of overthinking everything and missing opportunity. “Only Love” is about the loss of love, playing into Gates and Tai’s pasts and their worries for the future. Finally, “Gullspunnin” ties to the story in a few ways. There’s the matter of loss and death and grief, but also the water theme that threads throughout the book and entire series. This song captures the beautiful sadness that speaks to all of that.

Keri Hilson — I Like
This song basically sums up the entire first couple of chapters of the book! It has such a great vibe that makes me think of the characters, especially when they’re in the nightclub. There’s also the way the characters are really into each other. A fun, feel-good song that’s great for moving and grooving!

Since this is such a teensy portion of Fate in Suspension’s playlist, here are some fun honourable mentions to end the post. Since Tai and Gates meet at a club, these dancing-and-unwinding songs are perfect for them!

Thank you so much for being here. Happy reading!! ^_^