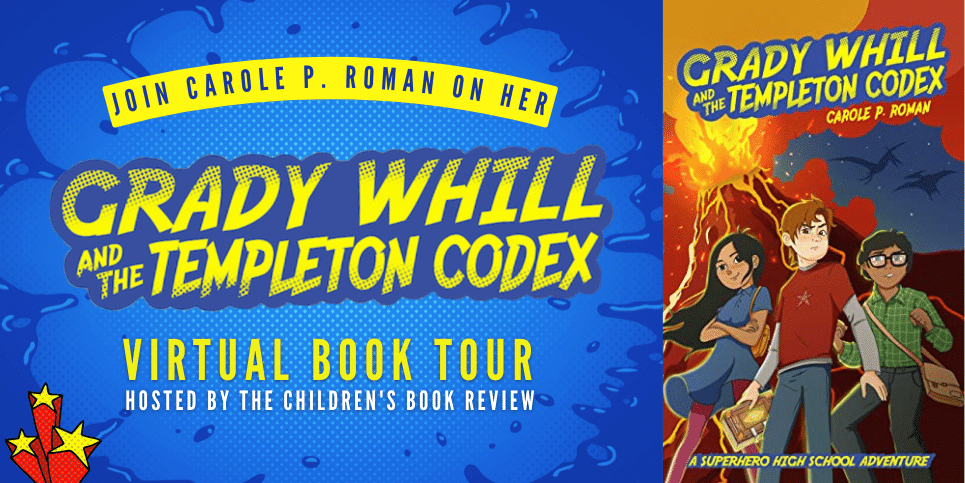 A warm welcome to the Blog Tour organised by The Children’s Book Review x Carole P. Roman for Grady Whill and the Templeton Codex! I am so excited! Just look at that cover! It just makes you want to read, want to know why these kids are near a volcano, and wait are those pterodactyls?

For today’s post I got a guest post by the author on superheroes, then I got a giveaway, and lastly of course also book/author information. 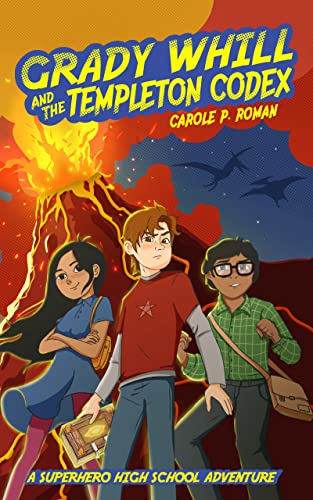 The prestigious academy is recruiting the best of the best to enroll in its student body. The school is as mysterious as it is exclusive. Grady Whill thinks there is nothing special about him to make the grade. However, his best friend, Aarush Patel has been selected and thinks Grady has the right stuff. Even school bully, Elwood Bledsoe is attending.

If Grady is fortunate enough to be picked, his guardian has forbidden him to attend. Will a family secret prevent Grady from becoming the superhero he was destined to be?

Carole P. Roman is the award-winning author of over fifty children’s books. Whether it’s pirates, princesses, spies, or discovering the world around us, her books have enchanted educators, parents, and her diverse audience of children of all ages.

Her best-selling book, The Big Book of Silly Jokes for Kids: 800+ Jokes! has reached number one on Amazon in March of 2020 and has remained in the top 200 books since then.

She published Mindfulness for Kids with J. Robin Albertson-Wren.

Roman is the CEO of a global transportation company, as well as a practicing medium.

She also writes adult fiction under the name Brit Lunden and has created an anthology of the mythical town of Bulwark, Georgia with a group of indie authors.

Writing is her passion and one of her favorite pastimes. Roman reinvents herself frequently, and her family calls her the ‘mother of reinvention.’ She resides on Long Island, near her children and grandchildren.

Superheroes: Are they a Suitable Subject in Kid’s Books?

Bookstores are filled with them in both book and comic book form, and conventions were created where anyone can dress up as a superhero of their choice and live out their fantasy of saving the world. An entire motion picture universe has been created where each film spawns more stories, and the characters live on and on and on to fight another day.

What is our fascination with superheroes?

It’s not new. Superhuman abilities have been worshiped since Greek Gods entertained the masses thousands of years ago. It makes for good stories. Duct tape doesn’t work for everyone; sometimes, you have to pull out the old x-ray vision to destroy a giant serpent.

Superheroes make it possible to have supervillains threaten our environment. Wickedly evil, diabolical characters crush the opposition, leaving humanity and the observer in peril, whether they are watching or reading. The greater the villain, the more exposed and vulnerable the audience becomes.

The situation is always hopeless—a larger-than-life person, hidden by a mask to disguise their humanness, springs from mysterious sources. We know nothing about them. They could come from another planet, be changed by radiation, be taught in a special school, or perhaps they have immense wealth and resources to create tools to overcome adversity. Either way, they are here to save us.

So how do these messengers of might become good fodder for children’s literature? Why expose kids to the feeling of insurmountable odds, followed by violent endings?

Superheros are good role models. They are brave, self-sacrificing, and follow a moral code that makes them rise above the average person. Cloaked in mystery, they have appeal. Kids love them. Whether wounded and struggling to fit in or stand out in their brightly colored uniforms, they embody all that is good and right in our world.

The superhero universe is constantly expanding, their potential changing as fast as our own world changes around us, but the core values of loyalty and courage remain constant. They are a beacon of hope in a world that is unraveling.

Whether it’s floods, asteroids, enemies, or even a powerful monster, superheroes were invented to elevate human abilities to overcome the looming catastrophe. They are the stuff of infinite possibilities rather than fantasies.