It is time to party! A tentacle welcome to the Release Day Blitz for It’s Not Unusual To Be Loved by an Alien by Chloe Archer!!! I am so excited to be part! And I will be reading the book very soon, I got an e-arc copy. So look forward to a review coming sometime in October (blog is a tad full).

For today I got a ton of fun things! Like you can read an excerpt, join the giveaway, check out some teasers, and of course I also got book/author information!

Let’s get partying~ And a big congrats to the author on the book’s release day! I hope you have a wonderful day~ 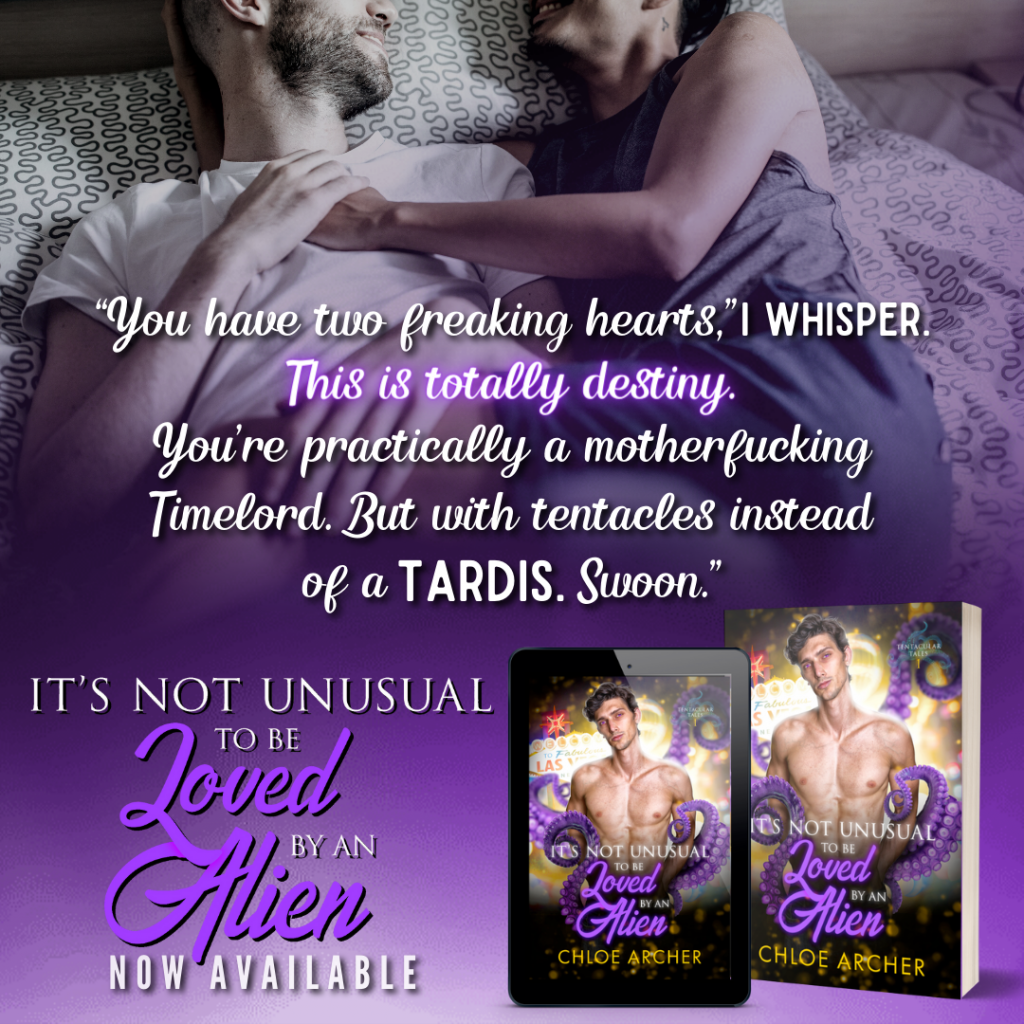 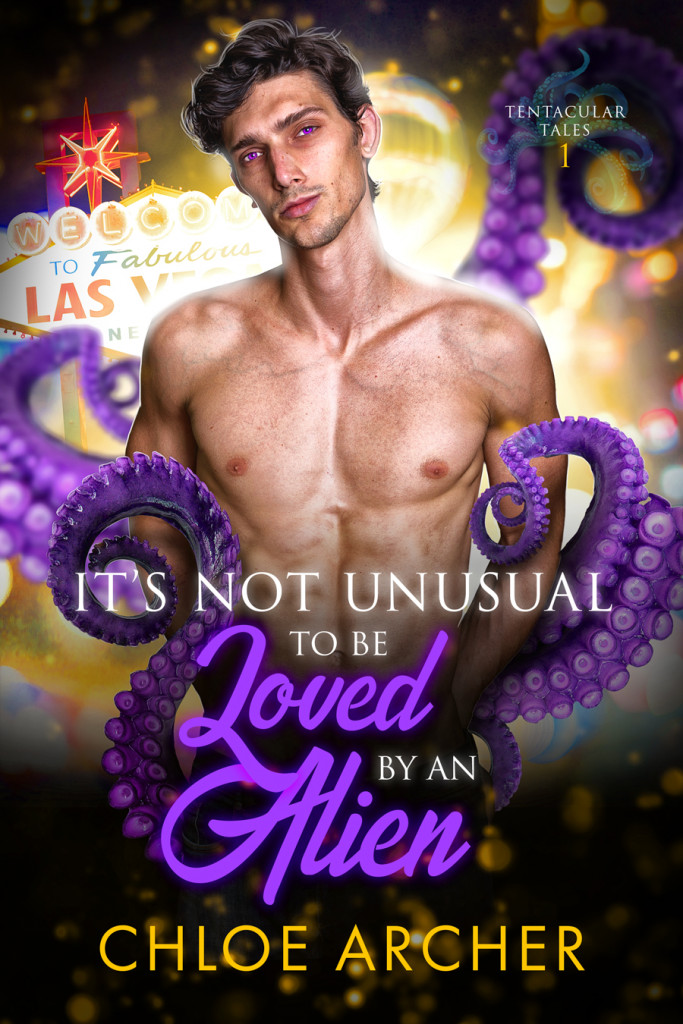 A sexy alien living incognito on Earth meets a sci-fi loving nerd who wants to rock his universe. What could possibly go wrong? Besides the unexpected tentacles and the accidental Mating Courtship Ritual, that is….
RIVER SULLIVAN
As a bona fide sci-fi nerd and total X-phile—the truth is out there—I’ve always believed in aliens. Duh. But I never thought I’d actually find them on Earth–let alone right here in Las Vegas! Now I’ve stumbled onto a big freakin’ secret and found my very own hot AF alien. I’m head over heels, but he’s being a total grump and holding back. How do I make him realize a geeky sunshine guy like me is just what he needs in his life? Did I mention he also has tentacles?!?! #HolyHentaiFantasyBatman #SwoonworthyAlien #SignMeUpSugar #MakeItSo #VivaLasVegas
KAI GENARO
The last thing I need in my life is a chatterbox twink who’s determined to woo me and could expose the secret existence of aliens on Earth to all humankind. Everything about him annoys me, including his stupidly attractive halo of golden curls and his bright green ‘come hither’ eyes. To make matters worse, he’s been recruited to work for the alien Alliance on Earth, and I’m assigned to keep him out of trouble. I don’t care how attractive he is. I don’t date humans! Except, my tentacles may have accidentally started the Mating Courtship Ritual with him…
It’s Not Unusual to be Loved by an Alien (Tentacular Tales #1) is an (102,000 words) M/M sci-fi rom com featuring an adorkable twink with unexpected secrets and a slight obsession with extraterrestrials, the reluctant alien he wants to make his boo, tentacles with a mind of their own, zany extraterrestrial shenanigans in Sin City, and enough humor to fill an entire spaceship. This is the first book in the series. There is no cheating, and this book ends with a HFN. Never fear, the series guarantees readers an HEA by the end! 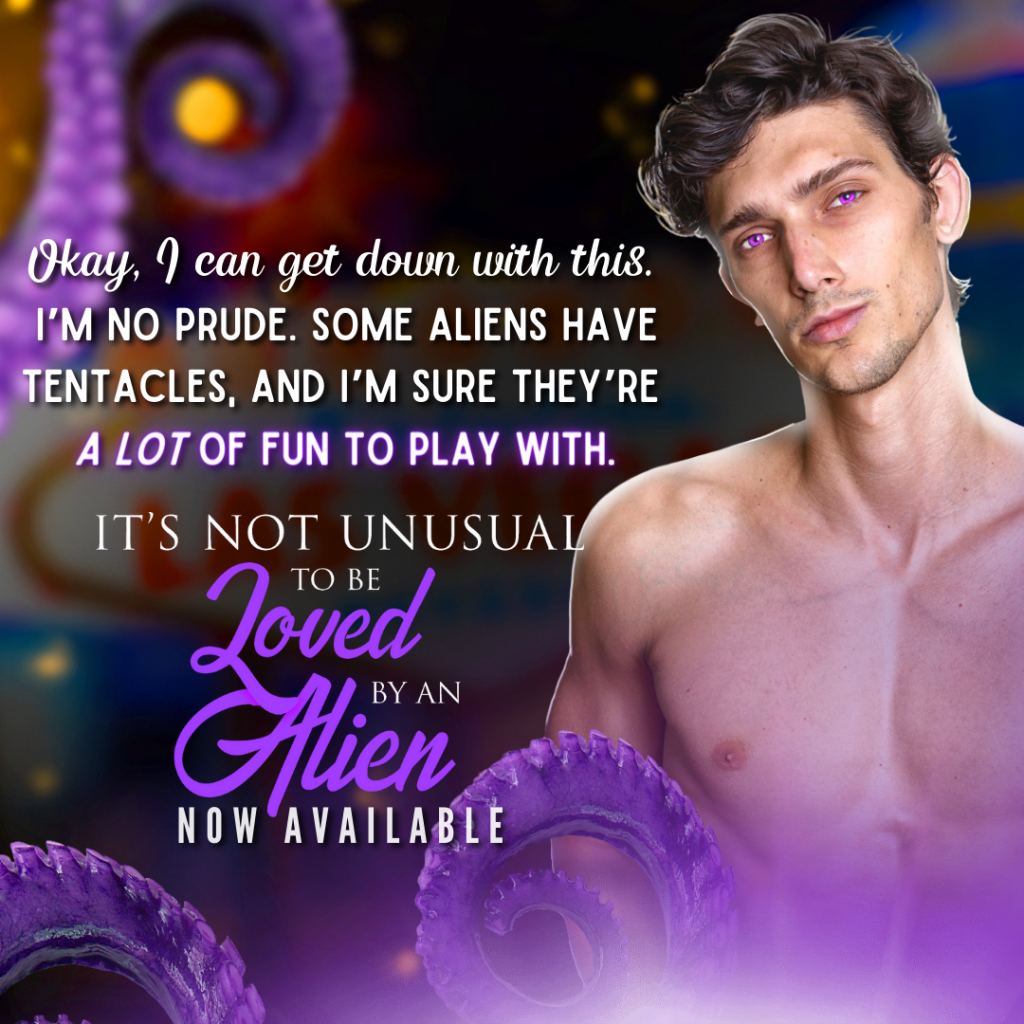 Chloe Archer writes M/M sci-fi and paranormal rom coms with laugh-out-loud humor because she’s all about bringing the funny-sexy back. Oh, yeah!
She currently calls Minnesota home but has lived abroad in places like Montreal, Edinburgh, and Tokyo. She’s hoping to relocate to Scotland permanently in the next few years if the stars align.
Chloe is a fur mama to two adorable Yorkies, Jasper and Teddy, and she loves them in a crazy dog mama kind of way. When she isn’t busy writing, she enjoys visiting friends and family, traveling, reading, binge-watching movies and TV shows, and practicing her karaoke skills. She does a mean cover of Pat Benatar and Cher, or so she’s been told. 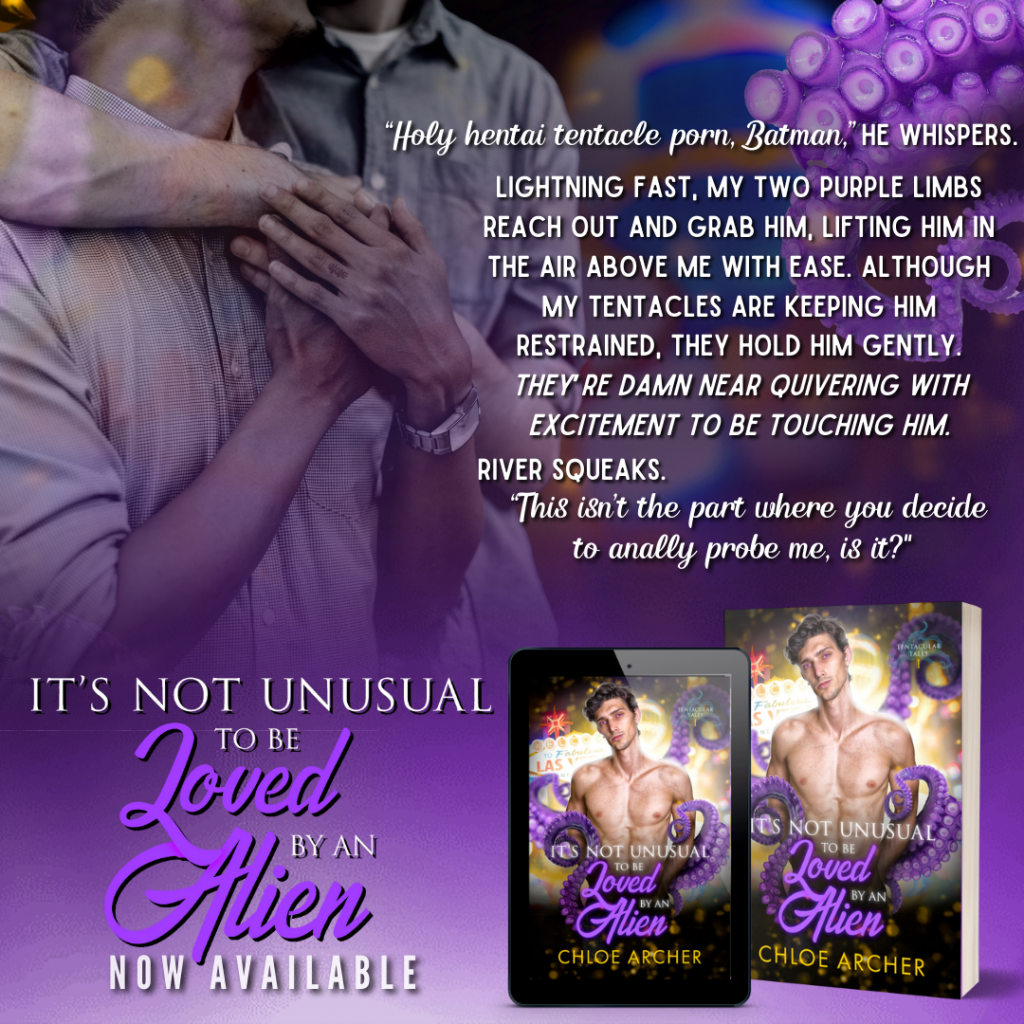 “Why do your pajamas have telephone booths on them?”
River jolts in his chair like I’ve used a cattle prod on him. I don’t think it’s possible, but his eyes get even bigger, and his mouth drops open. “Dude, this isn’t an ordinary phone booth. It’s the motherfucking TARDIS.”
“The what?”
“Uh oh.” Benji shakes his head. “Now you’ve done it.”
River’s nostrils flare. “First you think we’re freaking drug dealers, and now you’re telling me you don’t know what the TARDIS is? Don’t tell me you’ve never seen Doctor Who?”
Ah. Now I think I know what he’s talking about. I’ve heard of the show but never watched it. As a captain of the Alliance, I really don’t have time for such things. Something makes me want to keep messing with him though. He’s too adorable in his outrage. “What’s that?” I ask, feigning ignorance.
River puts the back of his hand to his forehead and slides out of his chair to collapse on the floor. I have to bite back a laugh. This guy should’ve done theater. Or maybe daytime soap operas.
River’s theatrics continue as he raises his fist so it can be seen above the top of the table and performs an over-the-top soliloquy of his own creation. “Oh, cruel universe! How could you bring me a hot as fuck alien Timelord-looking wannabe, but he has no idea who the Doctor is? Why? How can he not know about the TARDIS? Why is he channeling Agent K when all I want is a dashing David Tennant? Too, too cruel.” He fake sobs.
Against my better intentions, I can’t help but smile. This man is utterly ridiculous, but in a way that is somehow charming. He’s like a bright sun sucking me into his orbit, so vibrant and warm I can’t look away from him.
His eyes peek up at me from above the lip of the metal table, and he grins while flashing lovely straight teeth at me. “I knew I could make you smile.” He pumps both fists in the air. “Yeeeeeeeeesssss!”